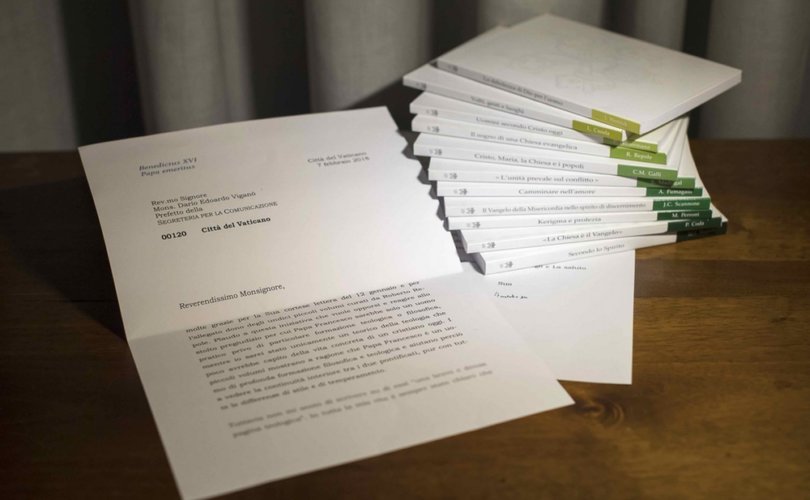 March 29, 2018 (One Peter Five) – As we reported on 23 March, Father Bernd Hagenkord, S.J., the high-ranking managing editor of the official Vatican news service, Vatican News – which had been supervised by Monsignor Dario Viganò until the “Lettergate” scandal – claimed in a comment under his own blog post concerning the Viganò scandal that the “partial publication” of Pope Emeritus Benedict XVI's letter was “agreed upon” with Benedict himself. In that post, he tried to downplay the whole Lettergate scandal, claiming that no one had been really hurt in this minor incident, with Monsignor Viganó just making a “mistake.” Later on, the German bishops' news website picked up on his claim about Benedict's purported approval and reported on it.

At the time, we commented on this new statement by Hagenkord as follows:

The problem with Hagenkord's claims is the following. If Pope Benedict had really approved of the partial publication of his letter – that which had been published in the first place, without the two missing paragraphs – why did Monsignor Viganò not say so? He could have simply stated that he only published a part of the letter because Benedict had himself agreed upon it. And there would not have been any scandal. Nothing.

Thus, the credibility of this second highest media man in Vatican News is being damaged, right after Viganò's own – also by the very fact that Hagenkord tries to minimize the public scandal of the whole Lettergate case.

As it turns out, Hagenkord's own reputation has now also been damaged. As the Vatican-based Italian news website Il Sismografo – which is widely read within the walls of the Vatican – reports today, Hagenkord had later quietly removed his earlier statement about the letter's publication having been “agreed upon” under his blog post. It is nowhere to be found anymore, except for a statement from another commentator who still quotes Hagenkord's deleted comments.

Yesterday, relaunching a service of [the website] Religión Digital (Spain), we reported on the curious Facebook post of Fr. Bernd Hagenkord, head of the German programming for Radio Vatican [which is now part of Vatican News], with which, some days ago, he sought to defend his former boss, Msgr. D. E. Viganò on the matter of the manipulated letter of J. Ratzinger. We wrote that the German Jesuit had said that the publication of part of the letter of Benedict XVI had been agreed to between Msgr. Viganò and the Pope-emeritus. Many people have written to us to notify us that Fr. Hagenkord did not say this, and that in response to a comment he had asked, as if it was an academic hypothesis, “And what if [the publication] had been agreed to?” [This is another comment by Fr. Hagenkord, under the same post. This comment has not been deleted. M.H.]

The reality, however, is different, as shown by a screenshot captured by many German people. In the first version, which was later corrected with a simple deletion, Fr. Bernd Hagenkord wrote:

This proves that it is not true that “the Jesuit never said that which was attributed to him.” No. He wrote it but then he deleted it.

Thus we spoke the truth. We did not make anything up. That is not our style.

Il Sismografo also publishes the screenshot with the now-deleted sentence. We were able to find that same comment by Fr. Hagenkord which is still under his own post, but without the one crucial sentence.

Thus, we have now another Lettergate scandal. The first Lettergate scandal is that Monsignor Viganò published a part of a confidential letter written to him by Pope emeritus Benedict, without saying that there are other, much more critical paragraphs he left out. The second scandal is that Fr. Hagenkord, the managing editor of the Vatican's official news outlet, Vatican News, first posts, in defense of Monsignor Viganò, the serious claim that Pope emeritus Benedict had originally approved of a partial publication of his letter to Monsignor Viganò, but then quietly withdraws that same statement, without apology – neither to the public, nor to Pope emeritus Benedict XVI himself whose good name was gravely damaged by Hagenkord's claim.

OnePeterFive reached out to Father Hagenkord, asking him for an explanation. As of this writing, he has not responded to our inquiry.