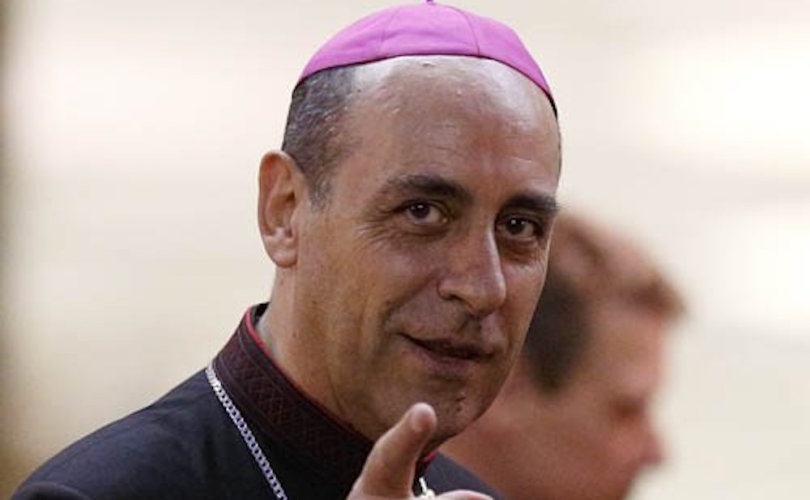 May 30, 2016 (LifeSiteNews) – Archbishop Victor Manuel Fernandez Guttierrez has been presented as Amoris Laetitia’s ghostwriter since the beginning of 2016 at least: Vaticanist Edward Pentin quoted “well informed sources” at the time who named the rector of the Pontifical Catholic University of Argentina in Buenos Aires as the Apostolic Exhortation’s “chief drafter.” The publication of the deeply controversial document has all but formally confirmed this piece of information. This week, Vaticanist Sandro Magister, who blogs for the Italian newsgroup L’Espresso, published a comparison between Archbishop “Tucho” Fernandez’ former writings and the wording of several of Amoris Laetitia’s most disputed paragraphs — and footnotes. They click.

Magister has unearthed “startling resemblances between key passages of the exhortation by Pope Francis and two texts from ten years ago by his main adviser.” So startling that he doesn’t even pretend to hypothesize about the implications: “A double synod for a solution that had already been written.”

This is consistent with declarations by Fr. Claude Barthe to Corrispondenza Romana earlier this month. The French theologian, who has many connections in the Vatican, noted in his interview that Amoris Laetitia clearly intends to introduce a new element in Church teaching, and that “the text of the post-synod exhortation was broadly elaborated in September 2015, that is, before the start of the second Synod on marriage and family.”

For all intents and purposes, the same manipulation appears to have taken place for the berated Relatio post disceptationem which introduced the question of homosexual couples into the half-way document of the Extraordinary Synod in October 2014, apparently out of the blue, and for the papal exhortation which on the point of communion for the divorced and “remarried” as well as “graduality of moral law” went a step further than what the Synod fathers had actually approved.

Amoris Laetitia does in fact introduce something very new in pontifical documents that Archbishop Fernandez Gutierrez had already clearly set out ten years ago in two separate talks on Veritatis Splendor, Pope John Paul’s “anti-relativist” encyclical written in close collaboration with Cardinal Ratzinger, who was then head of the Congregation for the Doctrine of the Faith.

The Exhortation clearly echoes these words of Archbishop Fernandez: “When the historical subject does not find himself in subjective conditions to act differently or to understand ‘the values inherent in the norm’ (cf. FC 33c), or when ‘a sincere commitment to a certain norm may not lead immediately to verify the observance of said norm’ [Footnote 45].” Amoris Laetitia reads: “More is involved here than mere ignorance of the rule. A subject may know full well the rule, yet have great difficulty in understanding ‘its inherent values’ [Footnote 339: John Paul II, Apostolic Exhortation ‘Familiaris Consortio’ (22 November 1981), 33: AAS 74 (1982), 121], or be in a concrete situation which does not allow him or her to act differently and decide otherwise without further sin.”

Likewise, Fernandez said in 2005: “Taking into account the influences that attenuate or eliminate imputability (cf. CCC 1735), there always exists the possibility that an objective situation of sin could coexist with the life of sanctifying grace.” The words of Amoris Laetitia: It “can no longer simply be said that all those in any ‘irregular’ situation are living in a state of mortal sin and are deprived of sanctifying grace.”

Like many of the innovators, Archbishop Fernandez presents true marriage correctly, but as an ideal that some cannot attain.

In both cases, pains are taken to present this new teaching as consistent with traditional doctrine and morals. But on this very pivotal question, Fr. Claude Barthe presents a clear refutation:

A principle that can be analyzed as follows: 1) the basis of specific conditionalities, would be that people who are in ‘active’ public adultery and know the moral rule prohibiting them, invite a guilt if they were to leave this situation (especially compared to the birth of children); 2) The people who live in ‘active’ public adultery, therefore, would not commit mortal sin if they remain in this state.

In fact, the negative consequences that result from the completion of the adulterous condition are (the children born of illegitimate union would suffer from the separation of parents) are not new sins, but the indirect effect of a virtuous action, namely the ending of a sinful state.

Fr. Barthe goes on to explain: “Those with knowledge of the moral norm that obliges sub gravi (the divine commandment that prohibits fornication and adultery) cannot be excused of sin, and therefore it cannot be said that they in themselves are in a state of grace.”

The priest then cites St. Thomas Aquinas to make the point that while the circumstances of an act can in some cases justify what would otherwise be a morally evil act – as in the case of violence against an aggressor – in some cases an act can never be moral. St. Thomas writes: Some acts “have a deformity which is inseparably attached to them, such as fornication, adultery and other things of the sort; they can in no way become good” (Quaestiones Quodlibetales, 9, q. 7, a. 2).

Archbishop Fernandez Gutierrez claims the contrary. And, “startlingly” once again, back in 2006, he misquoted Thomas Aquinas on persons, even saints, who can have “grace and charity but without being able to exercise well one of the virtues,” exactly in the same way that Amoris Laetitia misquotes the same phrase in order to justify objective evil.

All this is part of “situationist ethics” which move away from the objectivity of good and evil to put personal circumstances to the fore.

The whole purpose of Fernandez’ new morals is to present sanctifying grace as something one obtains or enters into gradually, instead of it being a state in which one finds oneself or not. Whatever that means, it certainly is not Church teaching.

Victor Manuel Fernandez’ ideas are nothing new for him, which did not prevent Cardinal Bergoglio, when he was still in Argentina, and then Pope Francis from the time he was elected, from pushing him forward and coming to rely on him as one of his closest advisors and collaborators.

Magister recalls that Cardinal Bergoglio was directly responsible for Archbishop Fernandez’ nomination as rector of the Catholic University of Argentina, although his promotion there had been energetically blocked by the papal nuncio to Buenos Aires and by the Congregation for Catholic Education. “In 2013, just after he was elected pope, Bergoglio even bestowed episcopal ordination upon Fernandez, with the title of the extinct metropolitain see of Teurnia,” Magister writes.

These facts also point to the deliberate direction given to the two Synods by Pope Francis. He must have known where he wanted to go, as his remarks to the press on the journey back from the 2013 World Youth Days in Rio had already made clear when he spoke of the attitude of the Orthodox Churches to the question of divorce and remarriage. Archbishop Fernandez was called to collaborate with Pope Francis from the very beginning of his pontificate: he is purported to have ghostwritten large parts of the programmatical Evangelii Gaudium as well as Laudato si’ and, true or not, he certainly sets himself up as an authority on the pope’s thinking in both of these texts.

Archbishop Fernandez was himself a key figure of both the Synods on the family. Pope Francis named him vice-president and he was also a member of the commission in charge of writing the Final Report. During the Extraordinary Synod in 2014 he told the press that it would certainly have to look at the question. Since then he has repeatedly presented the debate as a welcome “opening,” pleading for “realism” in the face of difficult situations of “people who cannot attain the ideal” of marriage.

It is he who underscored the importance of taking small steps in a desired direction in an interview with the Corriere della Sera: Pope Francis, he said, is laying the groundwork for reforms that cannot be undone. “For example, the pope is convinced that the things he’s already written or said cannot be condemned as an error. Therefore, in the future anyone can repeat those things without fear of being sanctioned,” he explained. He added: “The pope goes slow because he wants to be sure that the changes have a deep impact. The slow pace is necessary to ensure the effectiveness of the changes. He knows there are those hoping that the next pope will turn everything back around. If you go slowly it’s more difficult to turn things back. He makes this clear when he says ‘time is greater than space’.”

In an interview with the Argentinian daily La Nacion, also in 2014, Fernandez said the Synod was “only a step on the way” that would “open a new stage for the Church.” He commented that the consensus on homosexual unions was “not to treat this question for the time being,” suggesting that the Synod Fathers had perhaps lacked the attitude of Pope Francis, “Who are we to judge?”

After the Extraordinary Synod in 2014, in an interview with Vida Nueva, Archbishop Victor Manuel Fernandez claimed that only a handful of cardinals and Synod Fathers had opposed the direction which was clearly the Pope’s own choice, saying Pope Francis had the “generosity” of inviting people who were very different from him.

As to the Synod Fathers who opposed all changes, he called them in that interview a “group of six or seven fanatics, very aggressive, who didn’t even represent 5 percent of the total.” Elsewhere he described how they lobbied other participants with shrill reminders of traditional Church language in the corridors and recesses of the Synod, reminding them that they were imperiling the unity of the Church and “even that they had to think before God of the way they were going to vote.” “I know it’s useless to let oneself be scandalized, but one has to admit that this is far removed from the style of Pope Francis and that these attitudes lead him to feel a particular repugnance,” he said at the time.

This is the language of mainstream “correctness” that is of necessity in close connection with the powers that be. Archbishop Fernandez put it in a nutshell: “Oudated structures resist to change.” Changing the Church is what this is all about.