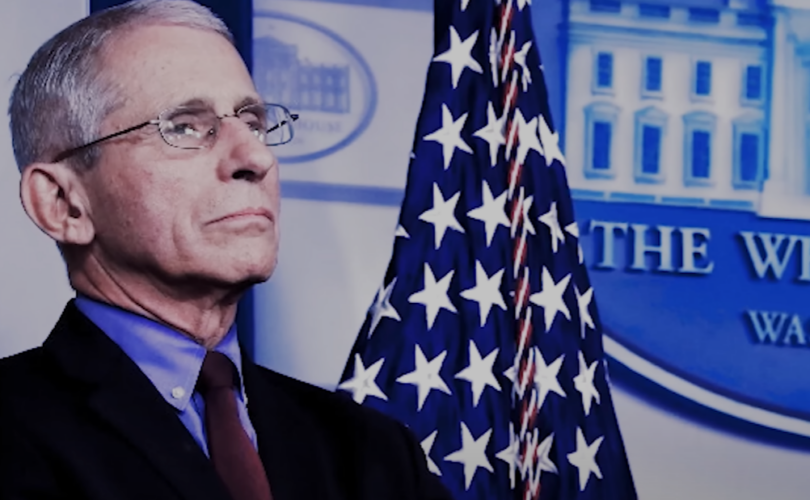 (LifeSiteNews) – Robert F. Kennedy Jr. in collaboration with Jeff Hays Films has released a film version of Kennedy’s bestselling book “The Real Anthony Fauci” that details the extent of Dr. Anthony Fauci’s influence on global public health, especially during the time of the declared COVID pandemic.

Currently, the movie is available to view for free at the film’s website for a limited time.

The film is jam-packed with information about the life of Anthony Fauci and his role in the transformation of public health into a veritable pseudo-governmental infrastructure that has decided public policy for decades.

The film begins with a summary of Event 201, which was a pandemic-response exercise that took place just weeks before the advent of COVID-19 in the public discussion.

That event, the film recalls, was sponsored by the World Economic Forum, the Gates Foundation, and the CIA had a hand in its operations. The notion of fighting “misinformation” was a central theme at the pandemic exercise, as was the idea of asymptomatic spread, a rushed vaccine, and other things.

The film portrays the event as something like a simulation for what was to come with the declared pandemic just a couple months later.

Showing the unprecedented response to the coronavirus, the film showed a montage of the various media campaigns that appear engineered to get everyone to think in the same manner about the virus. Kennedy believes this was done to stoke fear among the populous.

At one point, he remarked, “When people get fearful, their capacity for critical thinking gets disabled.”

In came Fauci, portrayed by the media as the cool, calm and collected scientist as opposed to the vilified and bombastic President Donald Trump.

The overall thesis of the film, as in the book, is that Fauci has been on a decades-long quest to be something of a Czar of public health, both in the U.S. and abroad.

Highlights of his time working in public health during the HIV/AIDS crisis are shown, and Fauci can be seen recommending something like social distancing as a preventive to contracting HIV even then.

The film notes that the narrative on HIV/AIDS was woefully incorrect, as was the narrative on COVID, and as he did then, Fauci has remained obstinate that he has done nothing wrong even in the face of severe criticism from colleagues and other scientists.

Another point the film makes is that Fauci has a history of jumping on the bandwagon of expensive and highly toxic medicines as treatments for diseases, ignoring their devastating harm to life and health and ignoring and or belittling and suppressing far safer medicines that can be repurposed for little to no money.

This has played out in the present day with Fauci’s reluctance to recommend safe and effective COVID treatments like hydroxychloroquine and ivermectin, and instead recommended highly dangerous and expensive remdesivir, as well as the now-proven dangerous COVID jabs.

The film is packed with loads more information about Fauci’s professional life and how his endeavors climaxed in his massive influence over the world’s response to COVID.

Those interested in watching the whole thing can do so if they act quickly, as the film will only be free until October 28.