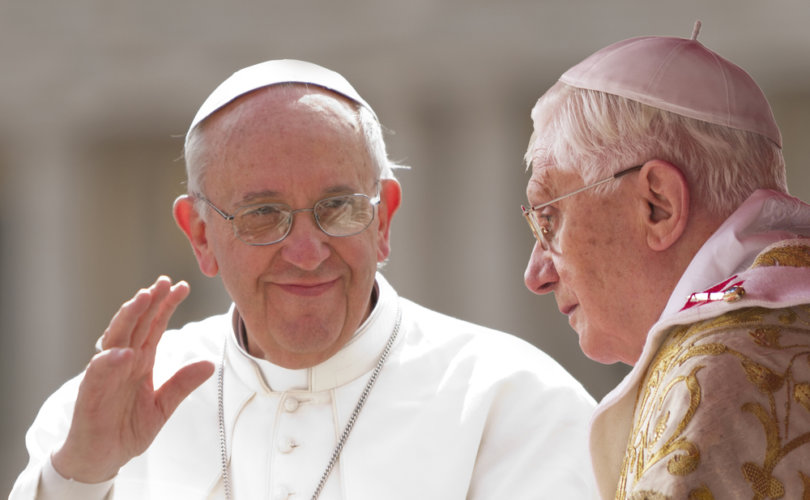 March 14, 2018 (CatholicCulture.org) – So what's the real story behind the letter from Pope-emeritus Benedict?

First, Msgr. Dario Vigano sent the former Pope a set of new books on the theology of Pope Francis, asking for a favorable comment. That was in January.

The former Pope declined to comment on the books. In fact he declined to read them, explaining that he was too busy. That was in February.

But a month later, the Vatican press office made public the letter from Benedict, leading reporters to believe that Benedict had essentially endorsed the theological approach of Pope Francis, just in time for the 5th anniversary of his pontificate.

In fact, the letter – which, as several observers noted, was not written in the familiar style of the former Pontiff – was something considerably short of an endorsement. Benedict acknowledged that Pope Francis has had considerable theological training (an issue that was not in doubt), and said that he saw an “interior continuity” between his pontificate and that of his successor, despite “all the differences of style and temperament.” At the same time, the retired Pope, quite uncharacteristically, used the letter to defend himself against the criticism that he was a detached academic rather than an engaged pastor.

Nevertheless, the release of the letter served the purpose for which it was obviously intended; hundreds of headlines appeared, announcing that Pope-emeritus Benedict had rebuked the critics of Pope Francis.

But Sandro Magister of L'Espresso dug a bit deeper, and revealed that the letter from Benedict was not an endorsement of the new Pope's approach, but a month-old response to a request for a comment on the new books. Magister posted the full translation of the former Pope's letter, including the paragraph in which he politely declined to review – or even read – the books.*

During the news conference presenting those books, Msgr. Vigano read aloud the letter from Pope Benedict, and presented a photographic copy to the reporters in attendance. Now it emerges the photo had been altered, so that the paragraph in which Benedict declined to read the books – the paragraph that revealed the true purpose of the letter – was illegible.

This was a violation of ordinary journalistic standards, which will cause a severe setback to the Vatican's hopes for establishing credibility with the media. Reporters do not react kindly when they learn that they have been hoodwinked. So this bid to gain a bit of favorable publicity for Pope Francis will inevitably backfire, contributing to the spate of unfavorable publicity that has suddenly struck this pontificate.

In my book Lost Shepherd I quote a friend, a journalist in Rome, who remarked on the favorable publicity that Pope Francis had enjoyed until very recently. “I can't imagine what it would take” to turn the media against Pope Francis, he said. This episode might not turn reporters against the Pope himself, but it will certainly not enhance the image of the Vatican.

* Sandro Magister has also remarked that although the photocopy of Benedict's letter was manipulated, Msgr. Vigano did read the full text aloud at the news conference. “So at least twenty Vaticanistas heard with their ears all that was written,” he observes; yet the other reporters went along with Msgr. Vigano's plan, presenting the letter to the world as something that it manifestly was not. In that sense the news conference produced another example of how obliging the Vatican press has been in its handling of the current pontificate. If that sympathetic coverage is now in jeopardy, this promises to be a very difficult year in Rome.