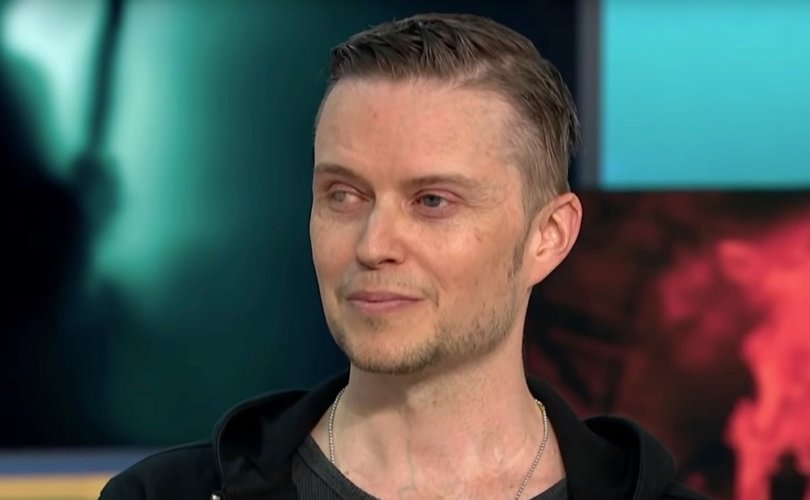 Lucien Greaves, co-founder of The Satanic Temple during a 2019 interviewGood Morning Britain / YouTube

March 9, 2021 (LifeSiteNews) — The Satanic Temple has sued the State of Texas, complaining that its abortion regulations, such as its sonogram-viewing requirement, interfere with the Temple’s “religious” abortion ritual and therefore violate their “religious liberty.”

A Satanic Temple attorney for plaintiff “Ann Doe” argued that “It is a substantial interference per se for the state to place a regulatory hurdle – one that costs money – in front of a religious exercise. The state might as well tax and regulate Mass.”

TST’s information sheet on “Satanic Abortion Rituals” further explains their public stance on why they consider regulations to be a hindrance to a ritual that they have claimed “sanctifies the abortion process by instilling confidence and protecting bodily rights.”

“The Satanic Abortion ritual is a destruction ritual that serves as a protective rite. Its purpose is to case off notions of shame, guilt, and mental discomfort that a patient may be experiencing due to choosing to have a legal and medically safe abortion,” the document states.

“Even the most confident and unapologetic individual can experience uncomfortable feelings and anxiety for choosing to terminate their pregnancy. Laws in many states that impose waiting periods and state-mandated counseling can exacerbate these feelings, as can social condemnation and outright harassment by those who oppose abortion,” TST continues.

The law also mandates the provision of materials that include a “comprehensive list of adoption agencies” and “realistic” color pictures showing the development of the unborn child “at two-week gestational increments.”

The TST abortion ritual involves the recitation of a so-called “personal affirmation”, which reads: “By my body, my blood, by my will it is done.”

Ritual participants are also to recite the TST tenets “One’s body is inviolable, subject to one’s will alone,” and “[b]eliefs should conform to one's best scientific understanding of the world. One should take care never to distort scientific facts to fit one's beliefs.”

Naturally, no mention is made in TST writings of the unique human DNA and separate bodies of unborn children.

— Article continues below Petition —
U.S. Senators: Don't use new relief bill to fund abortion!
Show Petition Text
8831 have signed the petition.
Let's get to 9000!
Thank you for signing this petition!
Add your signature:
Show Petition Text

While perhaps most of the publicity surrounding The Satanic Temple has focused on its high profile black masses and its Baphomet statue outside the Arkansas capitol building, one of TST’s central campaigns is its defense of ritual abortions and their freedom from regulations.

Their website provides a letter that “lays out a claim for a religious exemption” to state abortion restriction laws, and also declares their commitment to “challenge states that fail to enforce their Religious Freedom Restoration Act (RFRA) laws.”

The Satanic Temple, which was founded in 2013 and recognized as a “church” by the IRS in 2019, began as a political organization aiming to reduce the presence of religion in the public sphere. In 2017, after Donald Trump signed a “religious freedom” executive order, TST’s co-founder Lucien Greaves declared in a newsletter that TST “must re-evaluate its prior principled refusal to accept religious tax-exemption.”

Since then, they have claimed that their “deeply held beliefs,” “narrative structure,” and use of symbols and practices make them a church.

TST sued the State of Missouri in 2015 and again in 2019 for similar abortion regulations. In these cases, they objected to Missouri’s “informed consent” law, which mandated a 72-hour waiting period as well as the presentation of information about abortion’s medical risks and the humanity of the preborn child. This information included a definitive statement that “the life of each human being begins at conception. Abortion will terminate the life of a separate, unique, living human being.”

“The question of when life begins is absolutely a religious opinion, and the state has no business proselytizing religious beliefs,” TST stated.

While TST vehemently opposes viewing sonograms of unborn children or reading information sheets that affirm the biological reality of an unborn child’s humanity, it states in its abortion ritual info sheet that, “Before performing the ritual, you may choose to review the safety, the debunked claims, and the scientific reality regarding abortion.”

In 2015, then-Attorney General Chris Koster noted that the Temple could not “cite a single opinion from any state or federal court holding that a state’s expression of a value judgment about abortion constitutes an establishment of religion.”