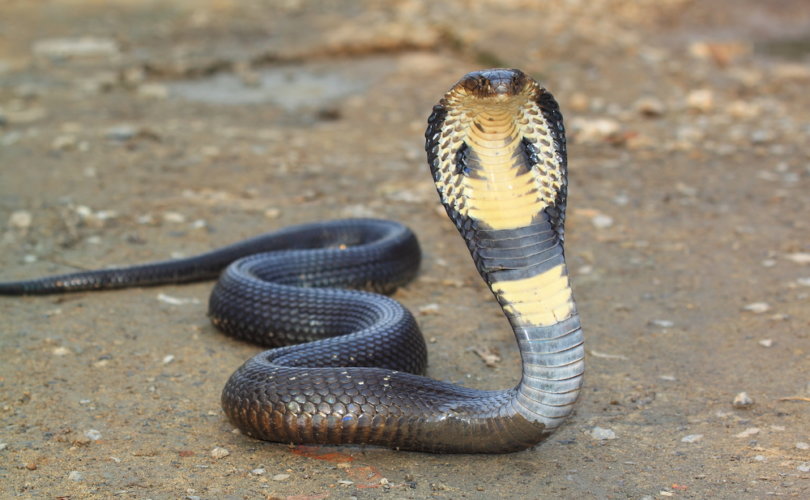 “Be on guard against the seduction of evil”

John is to blame for not defending his family – stepping into the breach. We cannot be angry with the cobra; after all, the cobra could not deny its nature.

Though I have seen many atrocities against life and family during missions to nearly 80 countries, I have not seen or experienced such a comprehensive and concentrated affront to life and family as I saw in my recent mission to Uganda. More than 100 anti-life groups, death peddlers (cobras), unashamedly market their poisonous wares, under the guise of “health care.” And they are doing this among a people who love life and family and who struggle simply to obtain basic human necessities.

The leading organization actively involved in anti-life work down to the village level in Uganda is Marie Stopes International (MSI), which has admitted to doing illegal abortions all over the world and which operates 14 illegal abortion mills in the country. MSI is supported by the usual population control groups, including: AVERT, CEDPA, the Center for Reproductive Rights, DFiD, Family Health International, the Gates Foundation, Human Rights Watch, IPAS, IPPF, PATH, Pathfinder International, Population Action International, the Population Council, the Population Reference Bureau, Population Services International, USAID, and at least nine organs of the United Nations. Each group is working to convince Ugandans that their economic problems are the consequence of too many children – the average family size still being 5-6 children.

No matter where, in the nearly 1,200 miles I traveled, I saw sign after sign, of various sizes and colors, marketing perverse sexual behavior that undermines

Ugandan culture and traditional life and family values. Alongside major highways, side roads, and even in some of the remotest villages, population controllers advertise their wares. Without conscience or shame and emboldened by the lack of resistance, poor education, economic need, and indifference, they display their evil goods openly. For example, the boulevards surrounding parliament, the seat of Ugandan government, are decorated with dozens of signs advertising contraception – injectables and condoms. Billboards advertise the need for lower numbers of children, which currently make up 55% of the total population.

Sadly, most parliamentarians and civil leaders are unfamiliar with the history of Marie Stopes or what each of the organizations actually has as its mission and strategy.

Ideological Colonization of the Mind and Desensitization

There is more to life than material abundance. With our own families and culture collapsing around us, it seems odd that we in the West so easily consider our way of life superior; that we see our relationship to the poor and to poorer nations as one in which we have all the answers, and that they should listen to us.

Many seek to impose certain aspects of Western thinking – an “ideological colonization” – in response to the struggles affecting millions of people and families living in abject poverty. They advocate for lower birth rates, introducing contraception and abortion, because from their point of view children are an obstacle to progress and development. This violent attack on life and family in the developing world is part of the “development” efforts of Western elites and wealthy nations, whose objectives are carried out by large non-governmental organizations (NGOs), who promote and uphold their values.

In Uganda, it is estimated that over 4 trillion Ugandan shillings a year are wasted by corruption. This act of injustice and violence against the Ugandan people is met with anger but also with indifference: “What can we do about it?” is the general response. The death peddlers exploit this situation and pour billions of dollars into the hands of corrupt government officials and locals willing to sell-out their fellow brothers and sisters, convincing them that they must do their part to decrease the size of Ugandan families in order to prosper as a nation.

This great lie does nothing to change the systemic reasons for abject poverty but only makes larger poorer families into smaller poorer families. The people are left with no improvement in their access to basic needs such as: clean water, sanitation, highways, medical care, schools, electrification and equipment for farming or resolving the maldistribution of goods.

Since 1996, over $170 billion has been spent in population control programs around the world, with over $70+ billion spent in Africa alone. Imagine what these funds could do authentically to change the standard of living for Africans? Instead, the death peddlers seek to keep Africa in poverty while exploiting its natural resources.

Why is Uganda's life expectancy still 21 years short of the United Kingdom's? Why do one in five Ugandans lack clean drinking water? Why do an incredible eighty percent of Ugandans not have access to sanitation facilities? Whatever happened to the empty promise that smaller families would lead to better and richer lives?

The ultimate goal of “ideological colonialism” is to abolish any sense of objective truth and limit all influence of Christianity – constructing a new world and vision of humanity. Among the poor nations, the West not only promotes contraception and abortion with a Malthusian approach, but we also see a gradual and steady increase in the promotion of euthanasia – seeking to eliminate the aged and the infirm. So, as demography sharply declines, people become lonely, depressed and isolated; as a consequence, they are more easily susceptible to the seduction of euthanasia.

Western colonialism tries to impose false morality and deceitful values like gender theory, comprehensive sex-education – so-called “sexual and reproductive values” – and the LGBT agenda. Such an agenda attempts, over time, to desensitize the conscience of people, pulling them from the truth. For example, gender ideology conveys a crude lie, denying the reality that a human being is a man or a woman, deconstructing the human person, and destroying family life and social order.

No Man is an Iceberg… Man needs God

We will never succeed in overcoming the challenges of the world by mere political and rational means. Man needs God. When a person's strength is anchored and sustained by faith and nourished in prayer, he or she is unstoppable. This becomes the source of joy and serenity because it unites us to God, who is our strength – our anchor.

Life is a talent entrusted to us so that we can transform it and increase it, making it a gift to others. No man is an iceberg drifting on the ocean of history. Each one of us belongs to a great family, in which he has his own place and his own role to play. Selfishness makes people deaf and dumb; love opens eyes and hearts, enabling people to make that original and irreplaceable contribution which, together with the thousands of deeds of so many brothers and sisters, often distant and unknown, converges to form the mosaic of charity, which can change the tide of history.
– Pope St. John Paul II, World Youth Day 1996

What has aided the death peddlers' success in promoting their anti-life agenda is that the laity's knowledge of and adherence to moral Truth concerning life and the family is woefully inadequate. Many Ugandans have not been exposed to Church teaching, rendering them incapable of adequately responding to the growing trend of secularization and the aggressive and militant approach with which it is pushed. Components of this secular agenda are predominantly hostile to Church teaching, promoting instead homosexuality as a positive good, so-called homosexual “marriage,” and all means of attack on the most vulnerable life via contraception, abortion and euthanasia, as well as promoting promiscuity and other perverse sexual behaviors.

Our brothers and sisters are ill-prepared to defend themselves against this onslaught and often fall prey to the illusionary language and destructive practices. There is hope, however, in developing nations where fidelity to the whole of the Catholic faith is present; there is hope where the Church is growing (Asia and Africa). Teaching the faith as an integral whole yields benefits in the crucial areas of life, family and society.

We presume that poor people in every part of the world want what the West has – material prosperity at any cost. There is much the West (and the world) can learn from many of the world's poor about the meaning of life and family. Their strong family values are cherished by their cultures, whereas we have sacrificed these traditional values for radical individualism and so-called progress.

Most Africans love and respect life, welcoming it with gratitude to God. The family and family relationships are still very strong, and people live their lives in happiness and generosity, despite daunting challenges. They celebrate God's abundance ― when a child is born, when the child is baptized, confirmed and married, at wedding anniversaries and graduations. Thinking about this makes me yearn for the time when we and the majority of the world held such values and treasures.

Though the majority of Western countries have followed the voice of the death peddlers instead of the Master of Life, we know that conversion is always possible and that lives, people and nations can be transformed – through repentance and amendment of life.

There is much we can learn from our brothers and sisters in Africa, especially the centrality of God, family and defense of human life. With increased faith and determination to regain what has been lost, perhaps both the developing and developed nations can, together, renew and reaffirm the great importance of life, marriage and family and authentically cultivate, build and sustain a Culture of Life and Civilization of Love – where the great commands of the Lord are expressed and fulfilled: