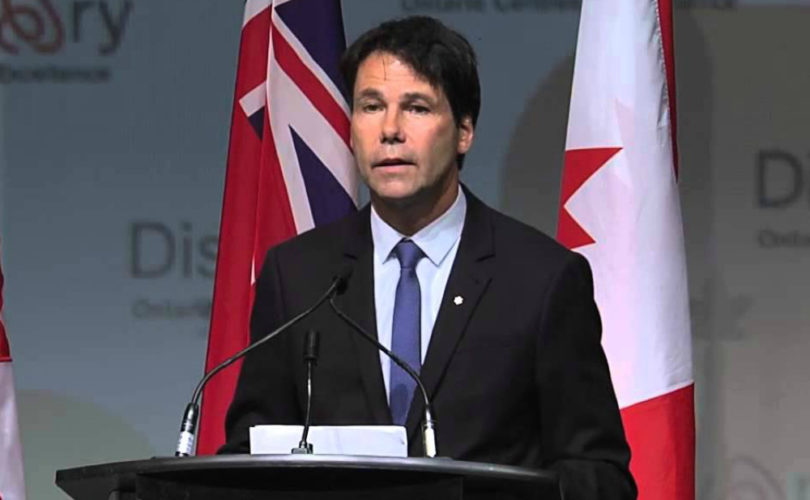 TORONTO, November 24, 2015 (LifeSiteNews) – A recent move by Ontario’s Liberal government to expand referrals for sex-reassignment surgeries (SRS) opened yet another front in the decades-long political and ideological war over the perception and treatment of gender dysphoria.

This mental disorder is characterized by a repudiation or aversion to one’s sex, and whether surgically altering one's genitalia is legitimate treatment for it is the most consequential question for transgendered persons themselves, and one of the more controversial issues surrounding “transgender rights.”

These have “emerged as the next big thing” in the United States in the aftermath of the Supreme Court’s decision that homosexual “marriage” is constitutionally protected, says Peter Sprigg, policy analyst for the Washington-based Family Research Council (FRC), and co-author of the June 2015 report “Understanding and Responding to the Transgender Movement.”

And the “trans” lobby has been abetted by political, medical, academic, and cultural institutions that are “both imbued with and ruled by the false sexual ideology that already has normalized homosexuality and imposed gay ‘marriage’,” says Dutch psychologist Gerard van den Aardweg.

Author of On the Origins and Treatment of Homosexuality and The Battle for Normality: Self-Therapy for Homosexual Persons, the Catholic van den Aardweg says that “giving in to the lure of SRS” is the “greatest danger for a person with some form of this so-called gender dysphoria.”

He regards sex-reassignment surgery and “accompanying hormonal administrations” as “sort of a half-suicide, an act of despair,” he told LifeSiteNews in an email.

“People who are obsessed with the idea – which is an idée fixe – that their happiness depends on ‘changing’ their sex suffer from a mental sickness that cannot and will not be cured by surgical and physiological tinkering away at their body which disguises them as persons of the opposite sex,” he warned.

“For SRS is indeed an operation of disguise through the causing of irreparable damage to the body. The victim is no less a man or woman as before, so the whole thing is in fact a big comedy, or actually, a tragedy.”

Echoing that view is Dr. Paul McHugh, who as chief psychiatrist at Johns Hopkins, which pioneered sex-reassignment surgeries in the 1960s, discontinued the procedures there in 1979.

“There are actually very few places that perform gender reassignment surgery, even in a country as large as the United States,” he told LifeSiteNews. “The people who are experts in medicine, like the large university hospitals and teaching centers and so forth, they don’t do sex reassignment surgery, and they haven’t done it for decades.”

The Catholic McHugh has since become an outspoken critic of transgenderism, describing it as a “pathogenic meme” in June 2015. “The idea that one’s sex is fluid and a matter open to choice runs unquestioned through our culture,” he wrote, and is “doing much damage to families, adolescents, and children and should be confronted as an opinion with out biological foundation wherever it emerges.”

And in a controversial June 2014 Wall Street Journal op-ed, McHugh explained that Johns Hopkins stopped SRS after observing no demonstrable difference in “psycho-social adjustments” in patients who had had surgery than in those who had not. Such negligible benefits “seemed an inadequate reason for surgically amputating normal organs.”

But transgender activists have demonized such views as McHugh’s, and discount evidence in favor of “personal testimonies and political demands,” points out Sprigg.

“People on the left tend to say, ‘We need to have evidence-based policies,’ and they’re very self-righteous about that everything needs to be evidence-based, but the transgender movement is not evidence-based,” he said. “It just is not.”

Transgender activists have also benefited from the “broader LGBT movement” that “has been very successful in framing what they do as a civil rights issue, in the public, and in major cultural institutions like academia, and the new media and the entertainment media,” Sprigg told LifeSiteNews.

“No one wants to, or very few people, want to be portrayed as standing against some group’s civil rights.”

At the same time, transgendered persons face what Sprigg calls a “Catch-22”: they want to be perceived as normal, yet retain the benefits of being ill.

The “gay rights” movement lobbied successfully to have homosexuality removed from the Diagnosis and Statistical Manual of Mental Disorders (DSM), in order to normalize that behavior, Sprigg said.

“Transgendered people can’t use the same strategy entirely, because they are seeking medical care and insurance coverage for their medical care, and therefore they have to have a diagnosis.”

That’s where the World Professional Association for Transgender Health (WPATH) comes in.

WPATH’s guidelines, “although they give a veneer of science and medical legitimacy to the process, are very biased in favor of gender re-assignment,” Sprigg says. “Usually both the people who are making the recommendations for surgery and the people who are conducting the surgery are committed ideologically to the position that surgery is the solution.”

“Any really scientific international standard must be based on reality and not on ideological assertions,” he told LifeSiteNews. “Everyone can see that the gender ideology that promotes the normalization of transgenderism and SRS is being imposed on the world by powerful international organizations and political bodies.”

“These arrogantly establish norms and criteria, proclaim by decree that what is abnormal will henceforth be normal, what is healthy unhealthy, what is ethical unethical, and pretend there is scientific consensus for their insane theories, while it is just a question of political and ideological pressure, of tyranny.”

Moreover, the claim that people are “critically examined and that only non-disturbed people are admitted” for SRS rings “hollow.”

“There are no tests to differentiate possible ‘successful’ from ‘unsuccessful’ cases so the selection is fully arbitrary and, as I noted, the outcome is terrible anyway,” he stated. “The transition industry is a very expensive example of medical charlatanism.”

As for the Ontario Liberal government, it adopts WPATH standards of care and has funded sex-reassignment surgeries since 2008.

According to Ministry of Health figures, the province approved surgeries for 604 people at a total cost of $8,943,000 in the seven years since, with $2.3 million spent in the last fiscal year for surgeries approved for 141 people.

But because SRS can only be approved through the Centre for Addiction and Mental Health, Health Minister Eric Hoskins announced earlier this month that he will “dramatically” increase the number of qualified professionals who can assess and refer for SRS in order to reduce a two-year waiting list of some 1,200 people.

This involves an amendment to Ontario’s regulations, posted on the government’s registry until December 21 for comments from the public, which won’t be made public.

It’s expected the amendment will receive the lieutenant governor’s approval, after in camera cabinet discussions and endorsement, in early 2016.

The ministry also confirmed that “at this time, there are no providers of genital SRS in Ontario” and most people go to Quebec for the surgeries. Hoskins told media that he is looking into “the provision of the surgical services.”

He also stated when announcing his proposed amendment November 6, that: “Every Ontarian has the right to be who they are.”

Van den Aardweg views Hoskins’ decision as “intellectually and ethically…very primitive” and “obviously inspired by the gender ideology that has stupefied the minds of so many politicians.”

“Politically, it is a further step toward the implementation of the revolutionary sexual ideology that aims at the normalization of any and all sexual deviations and at equal rights for their practitioners, that is, equal to the rights of normally married people and families,” he added. “So it is about a lot more than only about the fate of the individuals on the waiting lists.”

However, the fate of those individuals is most likely to be tragic and potentially fatal. “The realistic help they need, they don’t get,” he pointed out. “They will be confirmed in their mental confusion and false identity.”

“Of course, speaking about rights, all this is contrary to their ‘right to be who they really are’, the sole right in this connection. There is no right to sickness, merely a right to health (care) and realistic compassion.”

“The sex-ideological tyranny of the establishment must be countered by the sustained spreading of correct and honest information and public pressure on the responsible politicians and political parties,” added van den Aardweg.

“Regardless of success or defeat in immediate skirmishes, this line of action will always bear fruit, sooner or later,” he pointed out, “and greatly help the victory of truth and real human values over lies and un-values at the time the tide of the present moral and spiritual war will take a turn for the better.”

Those wishing to comment on Ontario’s proposed amendment, go here.