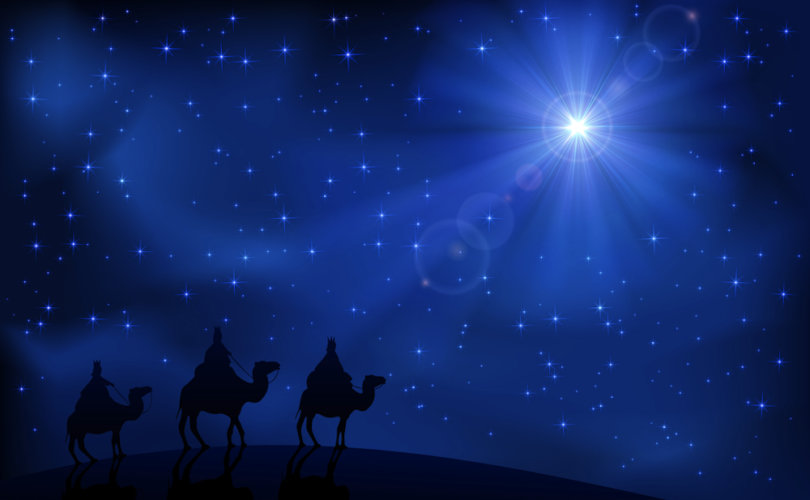 December 24, 2016 (LifeSiteNews) — The age of augurs is over. The time of reading the stars has passed. Men do not rely on prophecies based in a dubious knowledge of the stars and of unpredictable powers that govern nature and human fate. The augural cults of Ancient Rome that inherited their knowledge from Greece and even Egypt and the East have long died out and the ruins of their pagan worship can be visited today by tourists and visitors in the Roman Forum.

We do not believe that stars have any kind of influence on mankind. We know that the universe is material that it is composed of stars and galaxies, and we know the magnetic powers and principles that govern the infinite void that we call the universe.

It is curious that despite our “scientific” knowledge of the universe and earth in general, so many New Age groups flourish in our “rationalized” culture. One begins to wonder: Have we really put an end to all superstition and pagan worship? And how does modern man answer all the questions that burn in his heart and have fueled his inquiry into the mysteries of the world and the universe before “modern science” proposed its answers? Where does man come from? Where will he go? What is the meaning of life?

Aside from augurs long gone, one star remains in our tradition that we do not associate with pagan worship: It is the star of Bethlehem. It was the star that led three wise men from the East to a special place: Bethlehem, the birthplace of the Redeemer of mankind, and King of the universe. These wise men are traditionally known as kings, somewhat the culmination of what the “world” had to offer. They did not spurn Jesus like King Herod or later the Hebrews and Pontius Pilate. They instead wanted to find the root of their questions and used their wisdom to find the Christ-child.

But why this star? Why did God use this astronomical sign to guide the wise men?

While discussions (also here) on the possibility of the existence of that star bring forth a variety of possible ways to explain it or explain it away … its meaning goes deeper.

As Pope Emeritus Benedict XVI explained in his homily for the Feast of Epiphany, the sages “scrutinized the heavens because they were in search of the true light that could point out the path to take in life.” They used the “natural” way — the way known to them to find an answer. And God “on the other side” used that very same path. Honest to their respective “paganism,” Gaspar, Melchior, and Balthazar accessed Christianity. By following the sign of heaven, they encountered the King of heaven. And with Him, their questions about the meaning of life and of existence were answered. As pagans who did not seek a set answer, but were open to the working of the Holy Spirit, they were very different to our modern neo-paganism. Today, we experience a paganism that has formed against Christianity and not despite of it. Today, paganism is at war with Christianity – something foreign to the kings who were looking for the truth wherever it lay.

The new religion of neo-paganism is physical science. Let us not be fooled by the prevalent culture of “science” — science that kills the unborn baby because it detects a “deformity,” science that makes ending the life of the vulnerable “humane” instead of supporting truly humane help, and science that kills a presumed dead person to harvest organs for another. This kind of science has not stuck to its true aim: acquiring wisdom and the recognition of truth.

So often we hear today that the faith is in contrast with “scientific” revelation, with empirical evidence and with physics and mathematics. While scientists boast of knowledge of every element of life, they forget the meaning of life and, in turn of fact, their science becomes a new superstition. But in contrast to the kings of old, modern superstition is not honest with itself and with the world. This time, few scientists will follow the star and accept that which awaits them at the end. The new science will say: “There cannot be a star, for if we acknowledge the star, then we have to acknowledge the truth that this star leads us to.” Thus they come to the seemingly “rational” conclusion: “It must be merely gas. An optical phenomenon only, a mirage. There is no star.” And with this attitude, the real answer is forever lost for them. Benedict XVI instead said: “The universe is not the result of chance, as some would like to make us believe. In contemplating it, we are asked to interpret in it something profound; the wisdom of the Creator, the inexhaustible creativity of God, His infinite love for us.”

This Christmas, we as Christians should return to the simple way of looking at the world through the eyes of a child. God himself became a child and showed us men how to do it. In entering the world in the form of a helpless child, He entrusted Himself to His own mere creature. He believed and believes that this creature will not fail him. So let us not fail him. Let us allow ourselves be guided by the star … the star that will shine our way to the Lord!