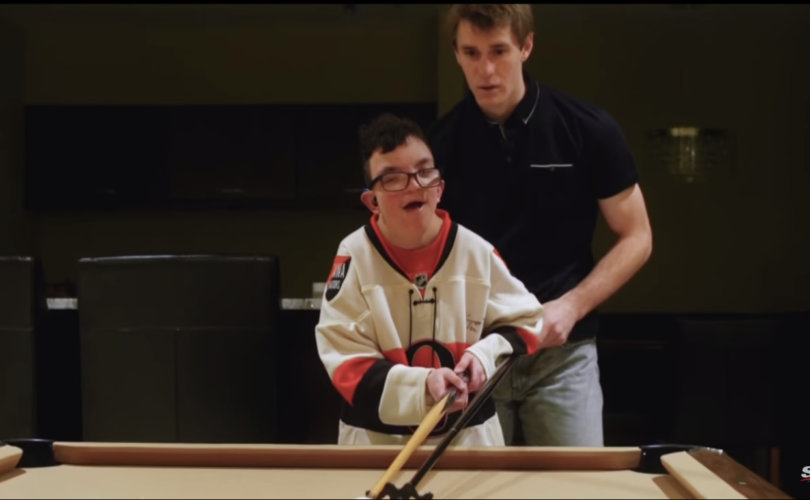 OTTAWA, May 15, 2017 (LifeSiteNews) – Ice hockey star Kyle Turris and his wife Julie have had a relationship with a young man that is mutually inspiring.

Doctors said Christian Ouimet’s parents should abort him because of an adverse prenatal diagnosis. He had developmental disabilities and wasn’t supposed to survive the first trimester of his mother’s pregnancy.

Christian overcame serious obstacles to survive and even play hockey. And while he has been thrilled to be friends with the sports celebrity, Kyle and Julie Turris are clear about the effect that Christian has had on them.

“The strength that he has is so inspiring,” the center for the Ottawa Senators stated.

“We want our son to grow up with similar character traits to that of Christian,” Kyle Turris continued. “The strength that he has, the attitude that he has, are the things that we would like to instill in our son.”

“He’s overcome so many obstacles to get to this place,” Julie Turris added, “And you would never know that because he’s so happy and positive.”

It was early on in the pregnancy that doctors suggested an abortion, Dorothy Ouimet said in a re-released video from Canada’s SportsNet network.

Christian’s father, Richard Ouimet, said the couple had no idea upon getting the diagnosis what the future was going to hold. “I remember vividly just saying, ‘What are we doing, why are we even considering this?’”

Christian has a rare chromosome disorder resulting in numerous physical and mental abnormalities.

When he was born, there were only 25 known cases worldwide. The young man had two heart surgeries by the time he was 10 months old, and had been declared clinically dead twice during surgery.

“The heart was disconnected,” explained Dorothy Ouimet. “They literally told me that they took his heart out of his chest. They had to put his body on ice.”

He made it through, but challenges remained. His heart has worked with the help of a pacemaker, he has only one kidney, and he is legally deaf and blind. Christian Ouimet had endured 26 surgeries by age 14, with more likely.

None of this has hampered his love of hockey. His family thought it would never be possible for him to play and that Christian would simply have to watch his brother and others on the ice.

But then his parents got him involved with the Capital City Condors, an Ottawa group of hockey teams for children with developmental disabilities.

Christian began being pushed on the ice in a chair, then he skated pushing the chair, before working up to skating on his own.

When Christian decided he was going skate on his own, and did so from red line to blue line, the stands erupted.

“You’re crying looking at that, going this boy wasn’t supposed to walk, and there was a chance that this boy would never live,” Richard Ouimet recalled. “But there he is on the ice, thinking he’s an NHL star.”

Turris has helped the Ottawa Senators reach the Eastern Conference finals in the Stanley Cup Playoffs. The Senators defeated the defending NHL champion Pittsburgh Penguins 2-1 in overtime in Game 1 of the best-of-seven series on Saturday night in Pittsburgh. Game 2 is Monday night.

It was through Kyle and Julie Turris’ involvement with the Condors organization that they became friends with Christian, developing a bond.

Kyle Turris kidded with Christian in the video about Turris forgetting to perform a special celebration move that Christian asked him to do after a goal. It resembles an Elvis Presley move where Presley shakes his leg.

“You’ve got to show me how to do it to remind me,” Turris told Christian. “See, I don’t know how I’m going to be able to do that on the ice, though.”

It’s a running joke between the two.

Christian explained in the video the simple way the hockey star has inspired him.

“I really like Kyle Turris because he plays hockey with me,” Christian said. “Kyle Turris is my best friend. I just love him.”