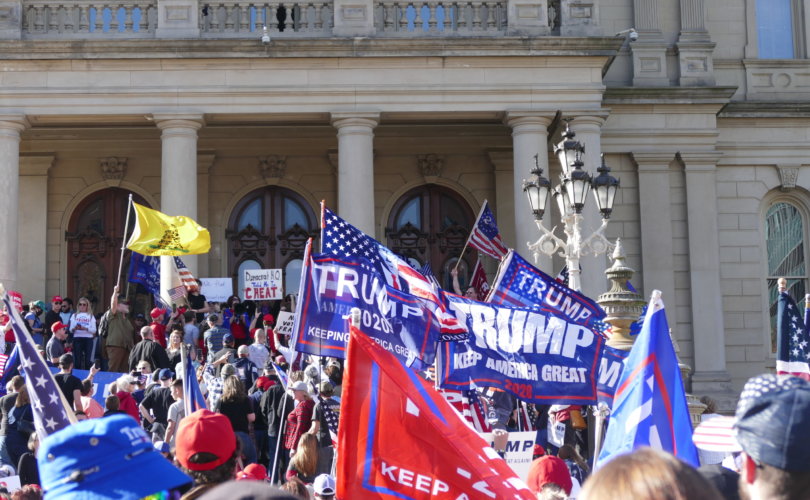 WASHINGTON, D.C., September 12, 2016 (LifeSiteNews) – Of all the issues facing evangelical voters, one looms over all others: the composition of the U.S. Supreme Court.

In his 42-minute speech to the annual Values Voter Summit, Republican presidential candidate Donald Trump said the justices appointed to the high court “will define this country for generations to come.”

“This will determine whether we remain a constitutional republic,” he said.

He wasn’t alone. Speaker after speaker invoked the judicial branch of government at the podium, and one attendee after another told LifeSiteNews the composition of the court would be a defining issue.

After reciting the ways that he believes the Obama administration is eviscerating constitutional freedoms, six-term Texas Congressman Louie Gohmert warned, “If Hillary Clinton replaces my friend Antonin Scalia on the Supreme Court, all those rights I just read are gone.”

Gone, possibly for good, they cautioned.

Gary Bauer, the first president of the Family Research Council who now leads American Values, said, “This is a Flight 93 election. This may be our last chance.”

Former Congresswoman Michele Bachmann said Christian voters must maintain “a sense of urgency,” bearing in mind that “2016 really is like no election we have ever had before, because we have never seen this level of American decline.”

“We can’t say that the moral choice was to support neither candidate, because one will win,” Bachmann said.

Republican Party chairman Reince Priebus forecast that “a Clinton Supreme Court is going to be entrenched” for years, “and will reshape our country for generations to come.”

That’s why “Planned Parenthood is out there working overtime to bankroll her campaign,” he said, “and we’ve got to stop her.”

“No American will have to bow at the altar of secularism if Donald Trump is president,” Priebus said.

“We are poised to win back the White House,” he said to thunderous applause, “and be sure that we protect the Supreme Court from liberal, activist judges.”

In addition to Justice Scalia, the next president could have the opportunity to appoint numerous other justices, as well as remaking the lower courts in a more liberal direction.

Justice Anthony Kennedy is 80, and former president Bill Clinton appointees Ruth Bader Ginsburg and Stephen Breyer are in their late 70s. Ginsburg, the court’s most outspoken liberal jurist, is said to be mulling retirement in the next few years.

Both conservatives and liberals have emphasized lifetime judicial appointments in their pitch to their respective bases. Bill Clinton first broached the topic during the Democratic primaries in January.