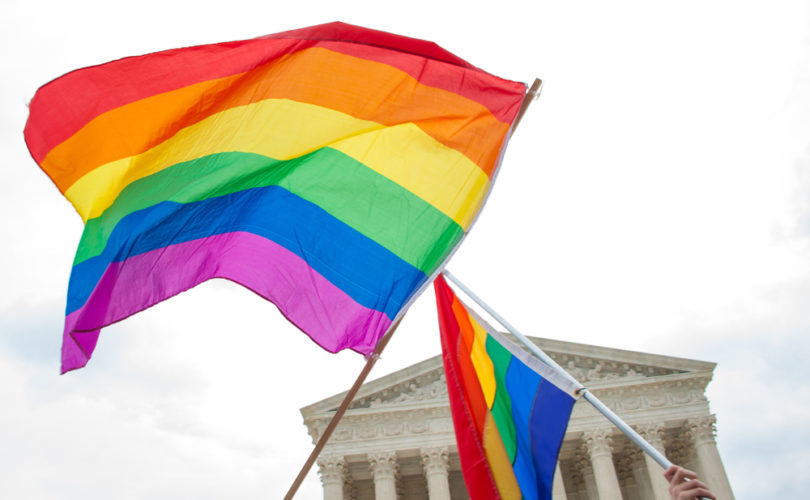 RICHMOND, Virginia, June 6, 2016 (LifeSiteNews) – A federal appeals court’s decision forcing a Virginia school district to allow boys into girls’ bathrooms, and vice versa, has commentators expecting it to be among the next big ‘culture war’ issues to hit the Supreme Court.

On May 31, the Fourth Circuit Court of Appeals upheld its panel's initial ruling last month on transgender girl Caitlyn Hope “Gavin” Grimm's lawsuit to use the boys' bathroom and facilities at her high school.

The Fourth Circuit includes North Carolina, so has a direct bearing on that state’s controversial bill, HB 2.

The panel made a 2-to-1 ruling last month that a Virginia high school had to allow Caitlyn, a 16-year-old girl suffering from gender dysphoria, to use all the school's intimate facilities designed for males. Caitlyn, who began identifying as a boy in 2014, has not undergone sex “change” surgery but she has legally changed her name to “Gavin” and begun taking hormones to give her a deeper voice.

On Tuesday, the Gloucester County School Board requested that the full Fourth Circuit Court of Appeals review the panel's ruling, but the court refused to do so.

Judge Paul Niemeyer, who dissented from the panel's decision, wrote, “Bodily privacy is historically one of the most basic elements of human dignity and individual freedom. And forcing a person of one biological sex to be exposed to persons of the opposite biological sex profoundly offends this dignity and freedom.”

Judge Niemeyer advised the Gloucester County School Board to appeal to the Supreme Court, saying, “Time is of the essence, and I can only urge the parties to seek Supreme Court review.”

“The momentous nature of the issue deserves an open road to the Supreme Court,” he wrote.  He did not call for a poll of his fellow judges, so as to help pave the way for the case to go before the nation's highest court.

In ruling against the school board, the three-judge panel invoked the “Auer deference,” referring to the 1997 SCOTUS case, Auer v. Robbins, in which the high court ruled that federal courts should give deference to federal agencies’ interpretations of their own regulations.  Since President Obama earlier this year publicly announced that his interpretation of Title IX anti-discrimination law includes transgender people – he even weighed in specifically on the Caitlyn Grimm case – the panel deferred to the Obama Administration.

Then, after accepting the Obama Administration’s interpretation of Title IX as the proper standard, the Fourth Circuit panel ordered a federal trial judge to reconsider his ruling against Caitlyn’s lawsuit, saying he had used the wrong legal analysis.

“It is my understanding that this ruling will most likely be immediately appealed to the U.S. Supreme Court,” the governor told reporters.

The North Carolina governor strongly criticized the Obama Administration for blackmailing states with threats of withholding federal funding for schools that do not allow boys in the girls’ locker rooms.  “The extreme Obama courts and administration deny…common sense flexibility at the expense of privacy for millions of boys and girls in our schools’ restrooms, locker rooms and shower facilities,” he said.

Successfully appealing to the Supreme Court is by no means certain.

Chris Gacek, Senior Fellow for Regulatory Policy at the Family Research Council, told LifeSiteNews that not everyone thinks the case will soon go to the high court.

“Guidance from the Supreme Court is much needed, as litigation is gearing up all around the nation,” he said. But “the Gloucester County case is in its very early stages procedurally;  there hasn’t even been a final judgment issued by the district court – let alone the U.S. Court of Appeals for the Fourth Circuit.”

Furthermore, Gacek noted that “the Supreme Court knows that it only has eight members, and it might be better to wait to take up a case of this significance with a full panel of nine.  For example, 4-4 ties that might leave lower courts split is not an appealing way to leave a matter – there is no finality only a guarantee to revisit the issue.”

He concluded, “One gets the feeling that the there just hasn’t been enough legal underbrush cleared away on both the legal and the political matters (e.g., the election; nomination of the Scalia replacement) for the Court to grant review.”

Attorney Travis S. Weber, the Director of the Center for Religious Liberty for the Family Research Council, agrees.

“While the Supreme Court may eventually have to resolve this issue, that will likely not occur very soon,” Weber told LifeSiteNews. “The 4th Circuit ruling was not final (it sent the case back to the district court), and the Supreme Court usually only takes an issue when it has been ruled on throughout the federal circuits – and when those circuits have come to different conclusions. Those factors are not yet present in this case.”

“On the other hand,” Weber added, “this is a very public and important legal issue, and the stakes have only been raised by President Obama’s recent 'guidance' on the matter.”