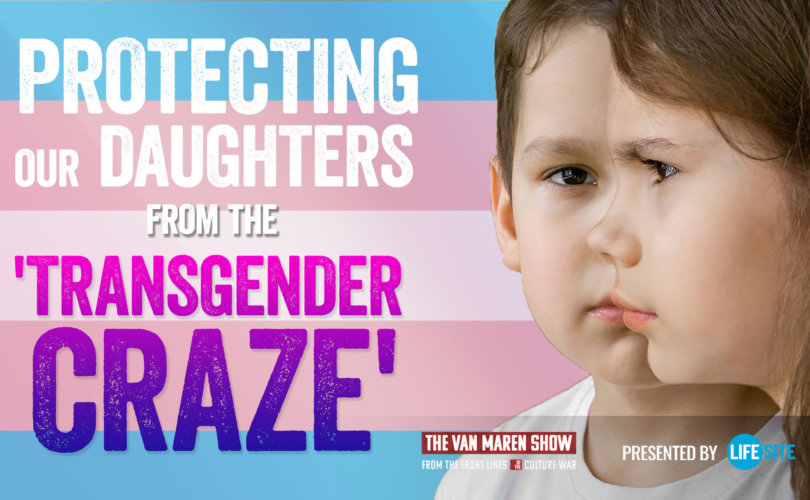 July 7, 2020 (LifeSiteNews) – In today’s episode of The Van Maren Show, Abigail Shrier, the author of Irreversible Damage: The Transgender Craze Seducing Our Daughters, joins Jonathon to discuss the explosion of teenage girls identifying as transgender. They also discuss how the trans movement is destroying an entire generation of girls and how this sinister ideology has spread so quickly.

Shrier, a lawyer by trade, began looking into the explosion of adolescent girls who said they were transgender after she wrote about transgender laws in an article for The Wall Street Journal.

Parents and others reached out to her saying that their daughter(s) are struggling with transgenderism and that many of their daughter’s classmates or friends claimed to be transgender. Since the investigative journalist at The Wall Street Journal wouldn’t look into those claims, Shrier decided to herself.

While writing her book, Shrier interviewed countless physicians, psychiatrists, parents, surgeons, girls who had transitioned, girls who never transitioned, and girls who regretted their transitions. During her research, Shrier realized the transgender agenda was targeting young women.

Shrier highlights the fact that gender dysphoria, as a mental health condition, has been studied for years and that it overwhelmingly presents itself in boys of elementary school age and younger. Rarely do adolescent girls have gender dysphoria, which has been on the rise in recent years.

Lisa Litman from Brown University’s Public Health department looked at the rates of transgender identifications in adolescent girls and found that the prevalence of transgenderism was 70x higher in friend groups as compared with the expected prevalence.

This result pointed to the fact that the spread of transgenderism among teenage girls was driven more by their friends and social interactions than by actual gender dysphoria.

Shrier points to the fact that girls are especially sensitive and vulnerable during adolescence. They tend to take on each other’s pain more readily, even as they’re struggling with their own self-consciousness and feelings, she said.

Shrier also points to the negative influence of social media on girls. Girls see perfect, stylized photos of women and girls on social media, which makes them uncomfortable with their own bodies, Shrier noted.

As they continue on social media, girls are bombarded by other young women speaking about their own transition and how great they feel like taking testosterone.

Shrier tells listeners that this isn’t surprising. Testosterone gives you an initial euphoria when you begin taking it and it reduces anxiety. Additionally, it redistributes weight, giving young girls the thigh gap and other body features they feel they need to be comfortable in their own skin.

Additionally, these social media testimonies are often very catchy and well packaged. They encourage other girls to give it a try and make them feel a part of something.

The spread of transgenderism among adolescent girls is truly a social contagion, Shrier argues, and not a medical or mental health issue. The problem is that this contagion is causing long-term damage for these girls, who truly can’t understand what they’re giving up.

Hormone therapy, specifically, testosterone therapy, leads to permanent sterility and other health issues. Once a young girl begins taking testosterone, doctors recommend having a preemptive hysterectomy due to the extremely high prevalence of endometrial and ovarian cancer.

Shrier argues that an 18-year-old girl, and in some states girls as young as 15, can’t truly understand what it will mean to give up their ability to have children and their ability to breastfeed.

However, in many states an 18-year-old can walk into a doctor’s office and start testosterone therapy (or start the process toward a double mastectomy) just by signing a waiver. This is one of the few medical procedures in which the patient can say, trust me, if I get rid of this healthy organ then I’ll feel better about myself, despite the serious long-term impacts of testosterone therapy or surgery.

Even with these serious side effects, it is difficult for parents to speak out and try to discuss these issues with their kids, Shrier says. As the transgender movement grows more powerful, parents are having to grapple with their kid’s decisions, but also with social pressure to accept their kids or risk losing them.

Instead of being parents and helping guide and educate their kids, parents are giving into their children. Shrier reminds parents that there is nothing wrong with letting your child continue to work through their thoughts and feelings, rather than rushing to affirm them. Most children as they grow up will grow out of these transgender feelings.

To stop the rapid spread of transgender ideology, Shrier recommends parents getting their kids out of public school. Schools are indoctrinating kids with transgender ideology from a very young age. Being bombarded by this year after year is truly confusing our children, she notes.

Shrier also encourages parents to take away social media completely and reminds parents that they are still in charge. When your 12-year-old wants to “transition,” parents need to do what is best for their child, in the same way a parent wouldn’t let a 3-year-old eat an entire package of cookies because the child wants to.

We need to stand up and protect our children, but especially our girls, from the permanent impacts of transitioning, Shrier exclaims. Instead, let’s focus on treating the underlying mental health issues and supporting our girls in their other hopes and dreams.