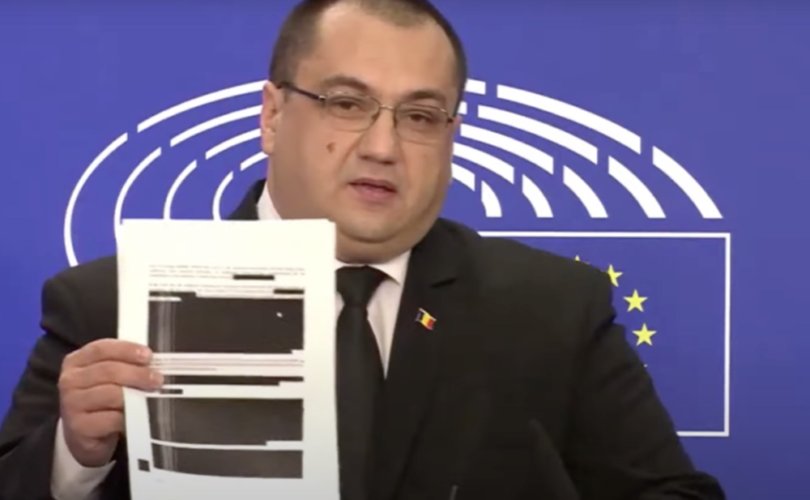 BRUSSELS, Belgium (LifeSiteNews) – A Romanian member of the European Parliament (MEP) denounced EU tyranny and police brutality against peaceful protesters who are demanding freedom from COVID-19 vaccine mandates throughout Europe.

“It is sad that we have to go on the street and demand the respect for basic fundamental rights, but we don’t have any other choice right now,” said Cristian Terhes, a Romanian MEP and priest of the Romanian Greek Catholic Church, at a Jan. 13 press conference. “Do we live in a Europe as an area of freedom as the treaty says, or do we accept as EU under the leadership of Ursula von der Leyen to become a prison camp?”

The MEP personally witnessed some of the unprovoked attacks on peaceful protesters by the police in Amsterdam on Jan. 2. He stated that these tactics are incompatible with respect for basic rights and recall the days of the ‘Iron Curtain,’ the communist block of countries whose way of life Western nations once sought to eliminate. “[A]fter the collapse of Soviet Union, we all believed that these values, these humane values I would say, that made such a great difference between the Western World and the world that was after the Iron Curtain, will prevail.

“And look where we are right now. From an Iron Curtain handled by the USSR, we live right now in a world, in a world, that you could easily call it ‘Iron Fist.’ This is what EU became.”

“Clearly what we see right now is, under the leadership Ursula von der Leyen, EU is transitioning from democracy to tyranny.”

The EU’s current lack of concern for human dignity resembles the view of the human person previously embraced during the communist era, noted Terhes.

“[T]hose countries after the Iron Curtain that were influenced by the Marxist philosophy, they all said that people, the citizens, do not have basic fundamental rights. All of these rights are actually privileges, granted, given by the government.”

Leaders in some EU nations, such as France and Italy, have adopted this view, Terhes continued, rescinding basic rights as punishment for refusal to accept an experimental COVID-19 injection. “(Emmanuel) Macron [the President of France] just said few days ago, that if you are not vaccinated or if you do not have a green certificate, you are not a citizen anymore. You know what that means? That you don’t have rights.”

While nations such as England and Ireland have recently announced plans to halt most Covid restrictions, some European nations are continuing to push covid jab mandates with severe penalties for the unvaccinated. There is no evidence from clinical trials that show the abortion-tainted COVID-19 inoculations prevent infection or transmission of the virus, and a growing amount of data suggests that the injections are harmful if not lethal.

The MEP said that respect for human dignity and transparency are two of the essential characteristics that distinguish tyranny from democracy, and that the West was once clear on what constitutes justice toward the human person. “We in the West would develop these great societ[ies] where we believe — and we put it in Constitutions, in treaties, in conventions — that every person has a unique dignity that must be respected and protected by the government,” he said. “Liberty, freedom, dignity … are not rights granted by the government, but these are natural rights that the governments must protect.”

Terhes said the answer to the current tyranny is “to protest and demand from this corrupt government and tyrannical government that our rights be restored” while praying that the citizenry never votes again for candidates who support the autocratic measures enacted during the Covid pandemic.

Before ending the conference, the MEP thanked all of those who have taken to the streets to oppose the vaccine mandates and promised to join in further protests until freedom, liberty, and human dignity are once again protected.