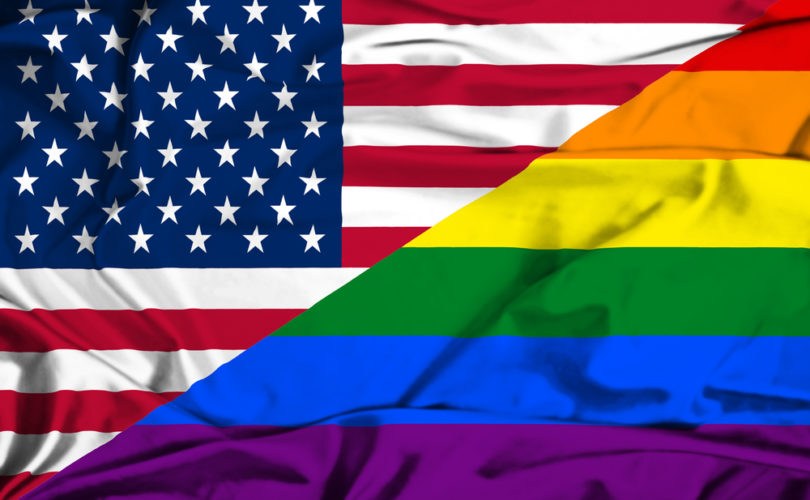 WASHINGTON, D.C, May 28, 2015 (LifeSiteNews.com) – Homosexual activists are demanding that any illegal immigrant who claims to be gay, lesbian, bisexual, transgender, or “queer” (LGBTQ) be set free and allowed to roam the United States, essentially making LGBT illegals a class above the law.

Dozens of members of United We Dream gathered outside the headquarters of the U.S. Immigration and Customs Enforcement (ICE) on Wednesday to protest what they consider to be mistreatment that homosexual illegal aliens experience while in U.S. custody.

They urged ICE, which is part of the Department of Homeland Security, to stop detaining all illegal aliens who say they are part of a sexual minority.

“They should not be holding people they know are vulnerable, they know will be sexually assaulted,” said National Center for Transgender Equality Executive Director Mara Keisling outside ICE headquarters. “They are doing that intentionally and we must call them out. We must make our people safe.”

Homosexual protesters say it is “torture” to hold gay and transgender inmates in immigration detention centers like all other illegal aliens, in part because transgender people are not allowed to be held in the cells of the opposite sex.

Recently, Secretary of the US Department of Homeland Security Jeh Johnson requested recommendations from homosexual advocacy groups regarding detention of LGBTQ illegals.

A conglomerate of LGBTQ organizations responded, recommending that ICE simply let all LGBTQ illegal aliens go free. “The most humane and the least expensive way to keep LGBT immigrants safe from mistreatment in custody is to release them on parole,” the report stated.

Mark Krikorian, executive director of the Center for Immigration Studies, disagrees. “Without detention of illegal aliens there is no immigration enforcement,” Krikorian told LifeSiteNews. “Illegal aliens – gay, straight, or otherwise – are detained, because otherwise they would simply not show up for immigration hearings, as we’ve seen with the vast majority of the 'unaccompanied' illegal-alien minors who surged into Texas last summer from Central America.”

“Alternatives to detention, such as parole, only work with aliens who are reasonably confident they’re going to win legal status anyway,” Krikorian explained. “The only punishment for ignoring your immigration court date is deportation – which is what would happen to almost all detained illegal aliens anyway. So, if you’re not in detention, why show up?”

Krikorian dismissed the idea of mass parole or release. “The LGBTQ angle is just a political gimmick – a way to make the illegal-alien detention issue relevant to another constituency,” he said.

“The underlying goal of all campaigns like this is the same: elimination of the nation’s ability to police its borders,” Krikorian concluded.

Other homosexual activists claim that homosexuals are being persecuted in their home countries and, therefore, must be admitted to the United States as refugees.

“If people believe they have a legitimate claim to political asylum, they certainly deserve to have their claims considered,” Ira Mehlman of the Federation for American Immigration Reform (FAIR) told LifeSiteNews. “However, not everyone who is gay or transgender is being politically persecuted, so merely falling into one of those categories should not automatically be grounds for being released into the U.S.”

Mehlman noted that there are far more people around the world who are being persecuted than the U.S. has the ability to protect. Therefore, “we must be sure that the people who are admitted as refugees or asylees are those who are in the greatest imminent danger, with the least likelihood of being able to return home safely within a reasonable amount of time.”

In the meantime, the Left wants to make the illegals' stay as accommodating as possible.

Gay activists have also frequently complained that homosexuals may be segregated from the general detainee population, and transgender detainees do not get the highest quality American medical care, such as receiving hormone treatments to assist in “changing” one's gender.

Unrelenting, United We Dream's Carlos Padilla said the May 27 rally is just the beginning of a “Summer of Discontent,” featuring direct action and Saul Alinsky-style community organizing.

“Conversations are getting us nowhere,” he said. “It's time for us to challenge their power with the power in our LGBTQ community.”

Illegal Immigrant raped preteen girl, forced her to have an abortion