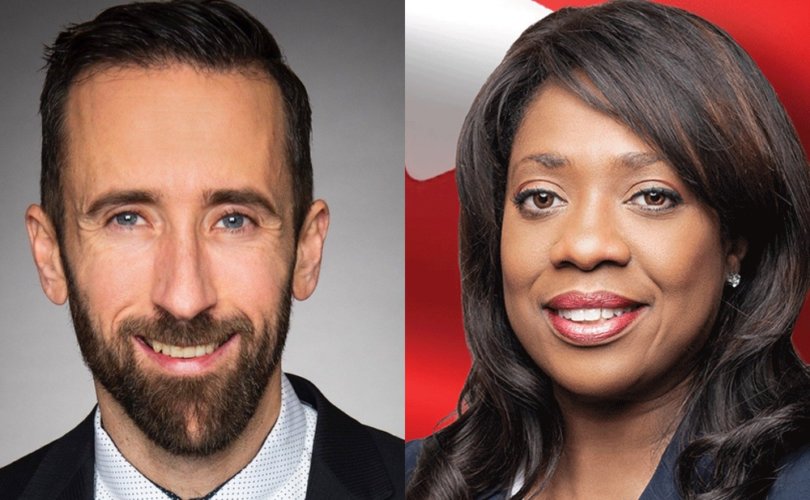 TORONTO, June 26, 2020 (LifeSiteNews) — Card-carrying members of the Conservative party of Canada have only two real choices if they want to see a pro-life candidate become party leader at the fast-approaching conclusion of the leadership race.

Ballots for the crucial Conservative Party leadership race are expected in members’ hands by mid-July. Pro-life groups such as Campaign Life Coalition and Real Women of Canada are urging pro-life social Conservatives to use the ranked vote — in which voters are allowed to select their 1st, 2nd, 3rd, etc. choice — to send their party a clear message that only a pro-life candidate is worthy of a vote.

CLC gives Ontario MP Derek Sloan an “A+” and Toronto lawyer Leslyn Lewis an “A” for their pro-life, pro-family policies. And it gives former Nova Scotia MP Peter MacKay, a frontrunner in the early days of the race, and Ontario MP Erin O’Toole a failing grade for pro-abortion, pro-LGBTQ policies.

The pro-life group is asking pro-life Conservatives “to vote for Derek Sloan and Leslyn Lewis in the top ballot positions of number one and number two, in whatever order you prefer,” says director of political operations, Jack Fonseca.

It is also urging pro-life Conservatives to leave MacKay and O’Toole completely off the ballot, even though O’Toole is endorsed by Alberta Premier Jason Kenney and Alberta MP Garnett Genuis.

Real Women of Canada is also urging party members to vote in a similar way.

REAL Women has now concluded that the following two candidates should be supported as Conservative leader. They are:

“REAL Women does not recommend that a vote be cast on the ballot for the two Red Tory candidates Peter MacKay and Erin O'Toole. Neither of them is pro-life/family nor can be trusted to take into consideration the social conservative position when making decisions,” the group stated in a press release.

O’Toole confirmed in last week’s French-language debate he will defend the “right” of women to choose abortion.

MacKay reiterated his pro-abortion stand to CBC in March, stating: “I am pro-choice. I am for equal marriage. I am not going to restrict access [to abortion]. I am willing to march in a [Pride] parade.”

O’Toole and MacKay “do not deserve a vote from pro-life, pro-family Conservatives,” emphasized CLC’s Fonseca.

“It would send the wrong message to all Conservative politicians across Canada, essentially telling them that they can earn our support without giving us anything in terms of meaningful policy.”

Campaign Life based its voter’s guide ratings on a number of criteria, including if candidates are willing to have a national abortion debate, repeal transgender “rights” Bill C-16; repeal “conversion therapy” ban C-8 if passed; repeal euthanasia expansion bill C-7 if passed; ban “gender-reassignment” surgery for those under 18 years of age, and support conscience rights and free votes.

The Conservative Party’s policy declaration already has things to say on a few of these matters, notably:

Sloan is a Seventh-Day Adventist and 35-year-old married father of three, former businessman, lawyer and MP for Hastings-Lennox and Addington, a riding in south-east Ontario created in 2013. He’s been a pro-life activist since a young age when he attended a Life Chain event with his family at age 7.

In response to CLC’s question on what government legislation, regulations or actions he would enact to protect unborn children, Sloan listed a 9-point platform that begins with a promise to support “grassroots efforts” to delete party policy that “a Conservative Government will not support any legislation to regulate abortion.”

The pro-life bills he would enact are: Unborn Victims of Violence Act, a Born Alive Infant Protection Act, a Partial-birth Abortion Ban, an Informed Consent Ultrasound law to require abortion centres to show pregnant women an ultrasound of their baby before proceeding with an abortion, and a law banning sex-selective abortion.

Sloan also promises to eradicate provincial “censorship zones” around abortion facilities and to ensure pro-life student clubs can operate on campuses, and would encourage adoption by raising the existing adoption expense tax credit to 22.5 percent and providing 15-weeks maternity leave to adoptive families.

He would cancel federal funding of overseas abortions in keeping with party policy.

The CLC voter’s guide says Sloan is the only candidate who promises to ban so-called “sex-reassignment surgery” for individuals under the age of 18. He also will raise the legal age for marijuana consumption to 25.

Both Sloan and Lewis state they will never march in pro-homosexual “Pride” parades.

Lewis, who immigrated from Jamaica at age five, is a 49-year-old Evangelical single mother of two, one-time TV host, and lawyer with multiple degrees, including a master’s in environmental studies and a Ph.D. in law she earned from Osgoode Hall Law School, York University in 2019. She was also vice-chair of Ontario Trillium Foundation, a position she resigned from this spring after the party approved her leadership candidacy.

In response to CLC’s question about what government legislation, regulations or actions she would enact to protect unborn children, Lewis listed two laws and two initiatives: a Sex-Selective Abortion Ban and a law to protect pregnant women from coerced abortions, and increased federal support for pregnancy care centres, and an end to federal funding for international abortions in keeping with party policy.

Lewis told Fonseca in a Virtual March for Life interview in May that most Canadians agree with these policies. She reiterated this in a June 7 interview with Chris Hall on CBC Radio’s The House.

“I have not proposed anything to limit access to abortion. I’ve actually proposed policies that the majority of Canadians agree on,” Lewis told Hall.

“For example, the majority of Canadians agree that a fetus should not be terminated on the sole basis that it’s a girl, so that this is not something that is divisive.”

She added that in a free and democratic society “we have to talk about challenging issues,” but at the same time, “the climate in Parliament is just not conducive to having a full-out abortion debate and as elective officials … we’re not activists,” Lewis said.

“Work has to be done on changing hearts and minds and that was Stephen Harper’s position, that hearts and minds need to be changed before there could be legislative changes, and I agree with him on that.”

CLC states that Lewis will repeal Bill C-8. She says on her website that: “If [C-8] passes without serious amendment it will require a full repeal.” Her campaign manager Steve Outhouse told LifeSiteNews: “She will repeal it *unless* significant changes are made that clearly address the potential criminalization of parents and pastors.”

Lewis’s campaign biography states she was a member of the Women’s Legal and Education Action Fund (LEAF) “for a brief three months,” and her Trillium Foundation bio, removed since her resignation, likewise listed her as a LEAF board member.

LEAF is arguably Canada’s most radical feminist pro-abortion and pro-LGTQ legal advocacy group (see an account of LEAF’s record here), and one of the organizations Sloan has vowed to defund.

Pro-life political activist Tanya Granic Allen, acknowledged kingmaker in the 2016 Ontario Conservative leadership race, sparked controversy in early April when she publicly asked Lewis to explain why she featured her LEAF board membership in her biographies. She stated that she had asked Lewis privately more than two months earlier “to renounce her association with LEAF and condemn their radical activism.”

Lewis “has absolutely no public voting record on life and family issues. We can only assess her as a political candidate by her public statements and her actions, past and present,” Granic Allen wrote.

In response, Lewis stated that LEAF “knew I held strong pro-life beliefs, and I hoped to be a balancing influence on the Board” when she joined in 2010.

“After a few months of earnestly trying to make a difference, it was clear that it wasn’t the best fit all around, and we wished each other well, and I chose to conclude my term early with the Board,” she said.

Her “main purpose of joining LEAF was to help plan the celebrations of the 50th anniversary of First Nations women receiving the vote,” and her time on the LEAF board “ended shortly after that event,” Lewis told LifeSiteNews in an email.

Both as an appointee to the Trillium Foundation and to apply as a Conservative leadership candidate, she had to disclose her board memberships, and “it would be dishonest to hide my past involvement with LEAF, or any other organization,” she told LifeSiteNews.

As for publicly renouncing her association with LEAF, “I hope one day that I can change the hearts and minds of women who don’t share my beliefs, but I don’t believe the way to do that is through condemnation,” she added.

Fonseca said Campaign Life defended Lewis at the time of the controversy and that hasn’t changed.

“We have no reason to doubt her many, many statements in public, in interviews, on her website, and in her communications and face-to-face with us and many, many conversations at CLC that she is pro-life and she is pro-family,” he told LifeSiteNews.

“We’d welcome the denunciation of any pro-abortion organization, but the most important thing is that she is championing our pro-life and pro-family values through the campaign and through her policy platform,” added Fonseca.

Lewis is listed as a member of the LEAF Fund Development Committee in its 2009-2010 Annual General report, and LEAF’s tax filings with Canada Revenue Agency list her as a board member in both 2010 and 2011.

In response to LifeSite questioning this seeming discrepancy with Lewis’s statement on her campaign biography that she was on the board for three months, Outhouse reiterated that her term with LEAF “was scheduled to be three full years, but she served actively only during 2010,” when she was organizing the 50th-anniversary event, after which she resigned.

“She, of course, did fundraising for this event,” he said. “It’s up to the not-for-profit organization to complete the proper paperwork, which obviously was processed at a later date.”

The party is mailing out the ballots in early July. With a ranked ballot, a member’s first choice is the member’s vote until that candidate is eliminated, at which point the member’s second choice becomes his or her vote.

The ballots must be returned to the Conservative Party no later than August 21, when it will tabulate the results and announce the new leader.