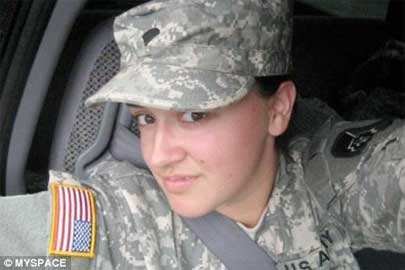 November 14, 2011 (LifeSiteNews.com) – When Bethany Saros got pregnant shortly after deploying to Iraq, she came face-to-face with what she claims is the military’s “unspoken code”: that “a good soldier will have an abortion, continue the mission, and get some sympathy because she chose duty over motherhood.”

But despite the fact that the father of the child was out of the picture by the time Saros knew she was expecting, abortion simply wasn’t an option for her.

Saros told her story in a recent article published on Salon.com. There she relates that she arrived in Iraq after five tumultuous years: “an abusive marriage, a nasty divorce, an unsuccessful relationship, getting raped by a co-worker, and an alcohol problem.”

By the time she deployed Saros had been sober for six months, but she recounts that she was “mentally and spiritually exhausted,” and she soon sought consolation through a relationship with a man she refers to only as “J.”

Though Saros was already experiencing pregnancy symptoms by the time J. left for mid-tour leave, it wasn’t until after he left that she connected the dots and took a pregnancy test.

“I rejected the idea [of pregnancy] at first,” she says. “We had been using condoms. We were safe. That couldn’t happen to me.

But the pregnancy test came back positive. And that, she says, is when the shame and the embarrassment set in.

For those soldiers who choose to give birth after becoming pregnant shortly before or while on tour, the implicit assumption by some is that they are trying to “get out of deployment,” says Saros. Pregnant soldiers are automatically sent back home to the United States.

“Instead of being seen as making a responsible parenting decision, you are seen as a faker, a soldier who couldn’t take the pressure and went to extreme lengths to get out.”

“No one ever said to my face that they were disappointed in me, but I could see it in the eyes of my commander, my first sergeant and my boss. They all congratulated me but I sensed I had let them down in some way,” she writes.

After the pregnancy test came back positive, Saros called up the father of the child.

“Are you going to keep it?” he asked.

But though “J.” promised that he would “be there” for Saros and her baby, that promise ultimately proved to be “meaningless.” Abandoned, pregnant, and halfway around the world from home, Saros found herself struggling against feelings that her world had “come crashing down.”

But despite this, Saros never wavered from her resolution to keep her child.

“I had let everyone around me down,” she concludes. “But I wasn’t going to let the little person snuggled up in my belly down.

“One day, my son would be old enough to ask me questions, and I wanted to be able to tell him that I gave him the best life I possibly could. At the end of the day, my son was the only person I would have to explain myself to.”

Read the complete story at Salon.com