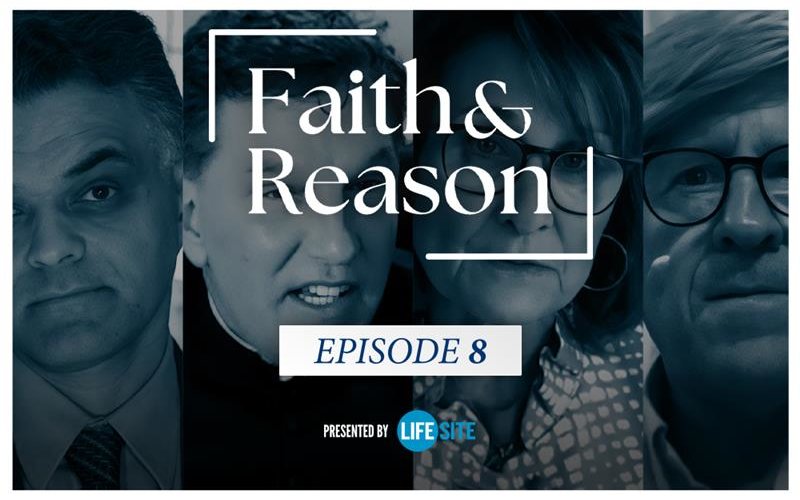 (LifeSiteNews) — On this week’s episode of Faith & Reason, the panel — with Jack Maxey calling in from Switzerland — discusses Bishop Bruno Forte’s claim that Jews do not need to convert, Pope Francis rejection of the conversion of non-Catholics, and Maxey’s work on the laptop which clearly shows the involvement of Joe Biden in his son Hunter’s corruption.

John-Henry Westen started the discussion by quoting Bishop Forte, who recently claimed at a conference in Rome that Christian churches should “end the active mission to the Jews.”

Fr. James Altman reminded us that “Jesus said, ‘Go and baptize all nations.’ That includes Israel.”

“What He did tell us to do before He ascended into heaven was to baptize every people. That means convert every people,” Fr. Altman said, adding that the Blessed Mother had also told us to do what Christ said.

For Liz Yore, it seems that such words are “laying the groundwork for the one world religion,” especially since “any talk about proselytizing or bringing people into the faith” is being silenced.

“It’s a form of censorship for all Christians, and this has been a steady, incomplete decline in professing the deposit of the faith by the Vatican and by this pope,” she said.

For Jack Maxey, a convert of eight years, “to upturn 2,000 years of tradition every week with some new scheme of theirs to me seems very frightening.”

“Was the church lying then [in the past] and now they’re telling us the truth?” he asked. “If truth is true, then it is immutable and I think that they have lost their faith.”

“When I see this kind of behavior, it just renews my faith in the true Church and her true teachings,” he added.

For John-Henry Westen, the claim of anti-Semitism actually can be leveled against those who are “not providing the truth, the fullness, the faith of Jesus to the Jews.” Mentioning Our Lord and Our Lady, he explained: “It’s their own people, they themselves were Jewish.” According to the Scriptures, ”it’s so clear that He’s lamenting over his own people and He has a great love for them.”

Westen also brought up an article by LifeSite’s Michael Haynes on Pope Francis’ long track record (going back to his time as Archbishop of Buenos Aires) of telling people not to convert to the Catholic faith. The panel highlighted the importance of living good and holy lives and the laity’s responsibility to “bring the faith to the unfaithful,” as Liz Yore put it.

“People who look at Jack Maxey and Fr. Altman look at their courage and say it must be the faith that gives them that courage,” she said.

Turning their attention to Jack Maxey’s work on the Hunter Biden laptop in Switzerland, the panel discussed how the media, now that they’ve been forced to admit the authenticity of the laptop, is trying to dissuade the public that President Joe Biden had any involvement in the corrupt financial dealings of his son.

“I think that Joe Biden is completely culpable. There’s clear evidence of co-mingling of their funds over time,” Maxey said. “Hunter, ironically, on Christmas Day of 2018 I believe, tells his daughter that ‘at least you won’t have to grow up like me, a guy who’s taking care of every bill in his family for 30 years, and I still have to give 50 percent of my take to pops the big guy.’ So there’s evidence of that all along.”

Maxey also refuted the claim that Joe Biden had no knowledge of his son’s business dealings. “If Joe never dealt with Hunter’s business practices, why was Hunter flying on Air Force 2 to go cut deals everywhere from Mexico to China?” he said.

Fr. Altman thinks that for the Democrats, “the handwriting is on the wall, thanks to Jack, thanks to Jack’s two-year perseverance to enforce his will on the American media public government to ensure that the American people see the truth of their leaders.”

Jack Maxey himself insisted upon the financial benefits obtained by President Biden and other politicians from Hunter’s corrupt dealings. Maxey found on the laptop a conversation that Hunter Biden had with his therapist in 2019, where they discussed his father’s dementia.

“This is before he’s even announced for president,” Maxey said. “So I think we need to look a little bit further back and say that Joe Biden was placed there [into the presidential office] to protect the bad actors inside the deep state,” among them the CIA, FBI, and others.

Maxey was also alerting the entire Biden family, saying that “they should pay attention, too,” since Hunter “put spyware on his entire family’s phones.” That material is to be found on the laptop as well.

As for Maxey’s own work on the laptop, he explained that “I’m hoping that by the end of the weekend, I will have a server up,” trying to do “everything properly and in a way that brings credit to we Americans, at least those of us who who are the good ones and also can bring information to the world that may avoid us getting in another war based upon lies.”

He hopes that once he is able to publish the edited version of the Hunter Biden laptop, people can research it for themselves and surely discover much more than what so far has been found.

“And also don’t think that Obama is going to skate on this. He’s not,” he added. “There’s a lot of things on there that reference Obama obliquely, but [as for] the deals that they were trying to do, Obama was knowledgeable.”

In addition, once he turns the more than 80,000 photos over to law enforcement, Maxey explained, “they’re going to find things that likely will meet the statute for child pornography. Now I don’t think there’s any coincidence that the Democrats put up a woman for the Supreme Court who wants to go soft on child abuse.”

For Liz Yore, it is clear that “this is about normalizing pedophilia. This is about decriminalizing child pornography. This is the next hill that the Left is going to force our culture to submit to.”

Both Yore and Maxey encouraged the American people to stand up and, as Yore put it, “clean up this great country that we have, but it’s got to happen and you’re the only ones who can do it.” As it is with the laity in the Church, so it is also in the state that citizens have to do this clean-up.