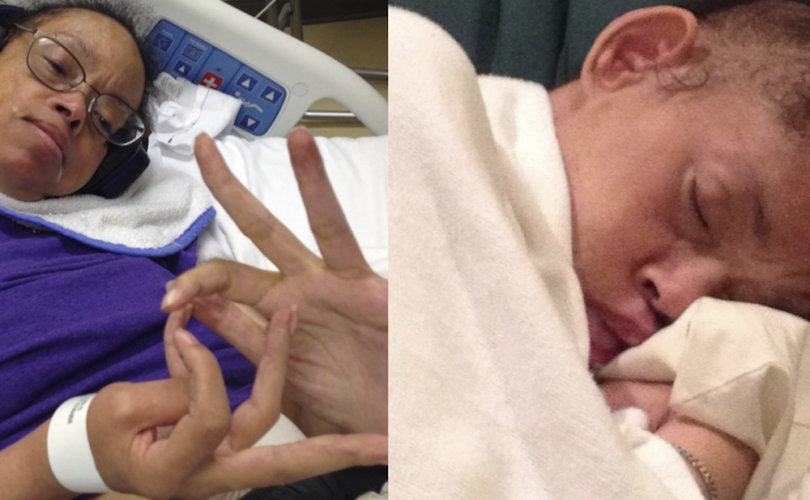 ANNANDALE, Virginia, April 20, 2017 (LifeSiteNews) – A disabled Virginia woman who was being starved at a nursing home there is now getting food and water, but her family and attorneys are sounding the alarm because she is still at risk and not receiving adequate care.

Adams was denied treatment for a blood clot and had her guardianship filched away before she was then clandestinely taken to an undisclosed facility. After several questionable injuries in a short time there, Adams was moved back to the hospital and put into hospice care, where she had been denied nutrition. Treatment is still being withheld.

“The family is Catholic and Anastasia has communicated that she wants to live,” said LLDF Executive Director Alexandra Snyder. “Anastasia does not have a terminal disease — the hospital is simply refusing to treat her and instead wants to put her to death.”

Snyder told LifeSiteNews that Adams is now receiving food and water, though only because more people were beginning to take note of the case. But in lieu of needed treatment, she’s only getting palliative care.

“This woman has family who loves her and wants to care for her,” said Snyder. “But they (hospital officials) have her on a death track.”

Adams was wheelchair bound after suffering a brain injury over 10 years ago, but she was able to speak and interact with family. Bell was the legal durable and healthcare power of attorney for over 12 years while Adams was in a nursing home.

Several months ago, Adams developed a large blood clot while in INOVA Fair Oaks Hospital, Snyder explained. The hospital refused to treat her and ordered that Adams be discharged.

When Bell refused to move her sister out of INOVA, the hospital took her to court and had its own guardians appointed to oversee Adams’ care.

Snyder told LifeSiteNews, “The hospital said, ‘Instead of treating her, we’re just going to take you to court.’”

“It’s horrible,” she continued. “They don’t like her questioning their protocol. She just wanted her sister treated and released and home.”

The guardians sent Adams to a nursing home without notifying the family, forcing Bell to have to track her down hours later because the nursing staff had been advised not to disclose any information. While in the nursing home, Adams suffered four injuries in two weeks, including a broken hip.

“To have two complete strangers come and just take her is just outrageous,” Snyder said. “They just dumped her in the facility.”

Bell has established a Change.org petition and Facebook page, where she’s telling her sister’s story. The petition is addressed to Virginia Gov. Terry McAuliffe and others. The objective is to prevent hospitals from seeking guardianship as a means to override patient rights.

“I am heartbroken beyond words,” Bell posted on Easter Sunday. “I fear for my sister’s life every minute of every day.”

“To have strangers come in and forcibly tear you from your loved ones, to abduct your person, because that is exactly what this is — an abduction — is terrifying for a person with a brain injury and other such patients,” Bell wrote in the petition. “It is terrifying for an incapacitated person who has relied heavily on and whose life, happiness and well-being has depended on a family member.”

She told of how she has watched her sister “whimper and cry out in fear since guardianship of her was awarded to Inova Fairfax Hospital appointed guardians.”

“I have had to watch the expression of fear on her face while being told lawyers would now be her guardians and that I no longer had control over where she lived, who would be caring for her, what medications she could or could not be given, or treatments she would or would receive,” Bell stated.

When Adams was transferred back to INOVA in March because of the broken hip, the guardians refused to authorize any treatment, said Snyder. Instead, they put her in hospice care at a Golden LivingCenter nursing facility in Annandale.

Snyder told LifeSiteNews that as a result of the court action before LLDF involvement, not only has the hospital seized power over Adams’ treatment decisions, Bell is not permitted to visit her sister.

“I miss my sister terribly,” said Bell. “I can only imagine what she is going through. She must think I have abandoned her. I have trouble sleeping. I close my eyes and see her being beaten and abused. I hear her crying out in pain begging me to help her.”

Adams now has a fever, Snyder told LifeSiteNews, but treatment is still being refused.

“Even though they’re not starving her, they’re just waiting for her to die,” said Snyder.

LLDF has release two videos, one taken prior to her being admitted to the hospital and the second taken at the nursing facility on April 8 showing Adams’ shocking decline.

LLDF is currently assisting the family in securing an attorney to recover Adams’ guardianship back to another sibling.

“Tragically, we are seeing an exponential increase in cases where patients are intentionally starved to death because someone has determined that their lives no longer have value,” Snyder stated. “Anastasia was targeted for death simply because she is disabled. But she can speak, feel pain, and fully understands what is happening to her. She is being tortured to death by healthcare professionals who have it in their capacity to provide care and treatment.”