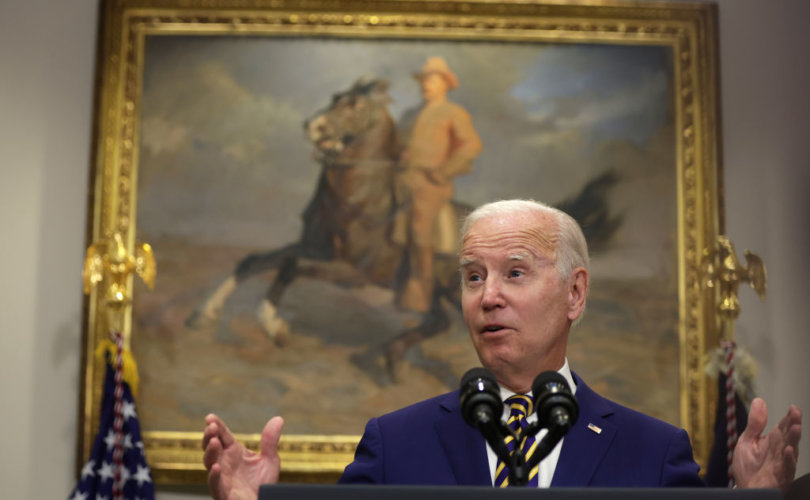 WASHINGTON, D.C. (LifeSiteNews) – The White House’s increasingly heated rhetoric about “MAGA Republicans” should not be interpreted as just a political campaign slogan against a fringe group of voters, or perhaps just Trump supporters who committed actual violence on January 6, 2021.

Ahead of a speech today by President Biden, White House Press Secretary Karine Jean-Pierre referred to “MAGA Republicans” as an “extremist threat to our democracy,” though she tried to make it sound like it was just an “extreme” part of the GOP.

She reiterated they represents an “extreme threat to our democracy, to our freedom, to our rights, they just don’t respect the rule of law you’ve heard that from the president.”

“MAGA Republicans are this extreme part of their party,” Jean-Pierre said on Wednesday.

Karine Jean-Pierre reiterates that tens of millions of Americans are “an extreme threat to our democracy,” “freedom,” and the country itself.

The only supposed crime? They vote Republican.

President Joe Biden and Democrats began using the term “MAGA Republicans” derisively this spring, after polling from liberal consultant Anita Dunn found that “MAGA” as an adjective swayed voters away from Republicans more than “Trump,” according to analysis by The Washington Post. Biden initially tried “ultra-MAGA” until Republicans, including President Trump, seized on the term much the same way conservatives turned “basket of deplorables” into a honorific title.

The term “MAGA Republicans” applies to most conservative views as well as some proposed by Republicans but never really embraced by the base, as summarized by former White House Press Secretary Jen Psaki.

She said during a May 10 press briefing that “ultra-MAGA” included “putting at risk a woman’s right to make choices about her own healthcare,” meaning that it refers to people who are opposed to the deliberate destruction of human life in the womb through abortion. So we can put pro-lifers in the “ultra-MAGA” or “MAGA Republicans,” basket, so to speak.

The press briefing reiterated the points made by Biden earlier in the day.

Commenting specifically on people who support reversing Roe v. Wade, Psaki stated “if you’re on the other side of that, you’re supporting an ‘Ultra-MAGA position, in the President’s view.” That also now includes five Supreme Court justices.

Psaki in her May 10 press briefing also included proposals that “would raise taxes on 75 million Americans and get rid of, ‘sunset,’ eliminate — whatever you want to call it — Medicare and Social Security,” misrepresenting a proposal by Florida Republican Senator Rick Scott to fix the funding of those programs. It’s not clear where the accusation of raising taxes comes from. In any case, the plan has not moved forward and now in September, it has not been embraced.  A proposal to fix the financing of social services spending hardly seems like something that threatens “our democracy.”

She added that the term included “the obsession with culture wars and wars against Mickey Mouse and banning books,” in apparent reference to Florida’s anti-grooming law that prohibits teachers in grades PreK-3rd from talking to children about sex, as well as efforts by some parents and activists to remove pornographic, pro-LGBT books from school libraries.

President Biden as late as August 25 confirmed that “MAGA Republicans” means pro-lifers. “So how extreme are these MAGA Republicans?  Just take a look what happened since the Supreme Court overturned Roe v. Wade,” he said at a Democratic rally in Maryland last Thursday. “In red states after red state, there’s a race to pass the most restrictive abortion limitations imaginable, even without exception for rape or incest.  But these MAGA Republicans won’t stop there.  They want a national ban.  They want to pass a legislative national ban in the Congress.”

“The MAGA Republicans don’t just threaten our personal rights and economic security, they’re a threat to our very democracy,” Biden said during the same speech. “They refuse to accept the will of the people.  They embrace — embrace — political violence,” he said.

Other Democrats have picked up the messaging.

Bardella referred to Republicans as a “domestic terrorist cell.”

“They walk around and masquerade with this term ‘pro-life,’ but, again, we just saw in Florida, somehow a child is not mature to have an abortion but is mature enough to be forced to carry a baby to term,” Bardella said. “They say they are pro-life and all of them, every single one of them, voted against the biggest climate change package we’ve ever had in our country’s history to try to make sure we can preserve life going forward.”

“They are a destructive force in American politics. They are basically a domestic terrorist cell operating in America. Their goal is to end democracy,” Bardella added.

New York Governor Kathy Hochul has made similarly heated claims against Republicans, urging them to leave her state and go to Florida. “And we are here to say that the era of Trump, and Zeldin and Molinaro, just jump on a bus and head down to Florida where you belong, ok? Get out of town. Because you do not represent our values. You are not New Yorkers,” Hochul said, in reference to the president, the Republican gubernatorial candidate and a Congressional candidate.

Since Trump and Lee Zeldin’s “values,” includes cutting taxes, opposition to abortion and support for gun rights, Hochul was really just reiterating the comments of her predecessor and Biden ally Andrew Cuomo.

In 2014 he said that opponents of gay “marriage,” abortion and supporters of gun rights “have no place in the state of New York, because that’s not who New Yorkers are.”

The rhetoric about Republicans could, perhaps in different times, be dismissed as just campaign season talk.

However, the Democrats and liberal allies have frequently been taking the rhetoric against Republicans to actionable steps.

For example, Attorney General Merrick Garland ordered FBI agents and federal prosecutors to keep a close eye on parents who protested at school board meetings over COVID mandates and leftist curriculum. The Department of Education coordinated with the National School Boards Association on a letter that compared parents to domestic terrorists.

Additionally, a liberal activist allegedly traveled from California to try to assassinate Justice Brett Kavanaugh in the midst of protests against the potential reversal of Roe v. Wade.

But remember that to Democrats, pro-lifers represent an “extremist threat to our democracy” and “are basically a domestic terrorist cell operating in America.”