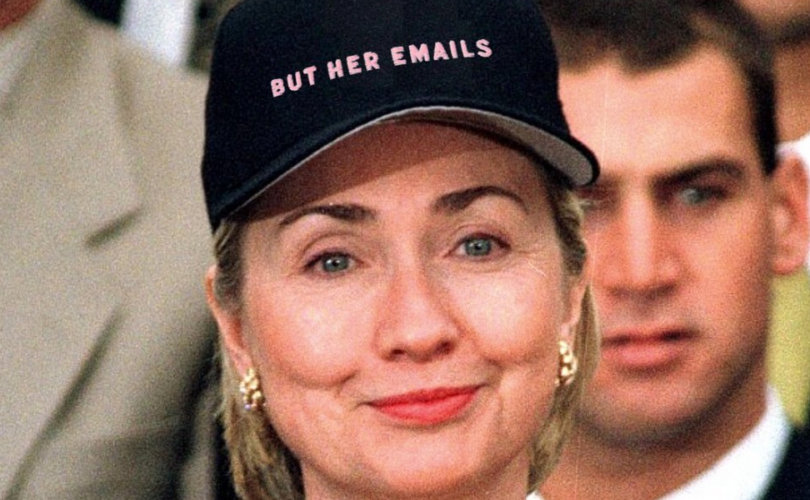 (LifeSiteNews) – Hillary Clinton is using the FBI’s raid on President Trump’s Florida home as a fundraising opportunity by trolling Trump and his supporters with the sale of merchandise emblazoned with “BUT HER EMAILS,” a phrase meant to mock all who believe the former presidential candidate had engaged in criminal activity by deleting tens of thousands of her emails and destroying the servers which housed them in the lead up to the 2016 presidential election.

Following the FBI’s Monday night raid of President Trump’s Mar-A-Lago resort home, Clinton tweeted a link to “Onward Together,” a site which sells an array of Clinton-promoting goods by pandering to liberals, focusing particularly on pro-abortion and LGBT constituents.

“Every ‘But her emails’ hat or shirt sold helps Onward Together partners defend democracy, build a progressive bench, and fight for our values,” wrote Clinton on Twitter Tuesday morning.  “Just saying!”

Every “But her emails” hat or shirt sold helps @onwardtogether partners defend democracy, build a progressive bench, and fight for our values.

Within an hour, the $30 “BUT HER EMAILS” baseball caps had sold out, according to the failed presidential candidate, who then pivoted to hawking T-shirts delivering the same message.

Clinton’s Tweets are, at least in part, a reaction to President Trump’s 340-word statement issued shortly after the FBI’s intrusion into his home. The statement read in part:

Hillary Clinton was allowed to delete and acid wash 33,000 E-mails AFTER they were subpoenaed by Congress. Absolutely nothing has happened to hold her accountable.

In July 2016, during the height of that year’s presidential campaign, FBI Director James Comey announced the results of his agency’s investigation into the destroyed Clinton server and lost emails. Col. Allen B. West summarized Comey’s findings:

Despite the FBI’s findings, Hillary Clinton was never charged. Many detect an enormous discrepancy between the FBI’s harsh treatment of Trump and its willingness to look away from Clinton’s overt criminal acts.

Twitter has taken to suspending those calling attention to the FBI’s unequal treatment of Trump and Clinton.

Among other products available for purchase at “Onward Together” ––the political action committee which Clinton founded after her loss to Trump–– are abortion and LGBT promoting shirts.