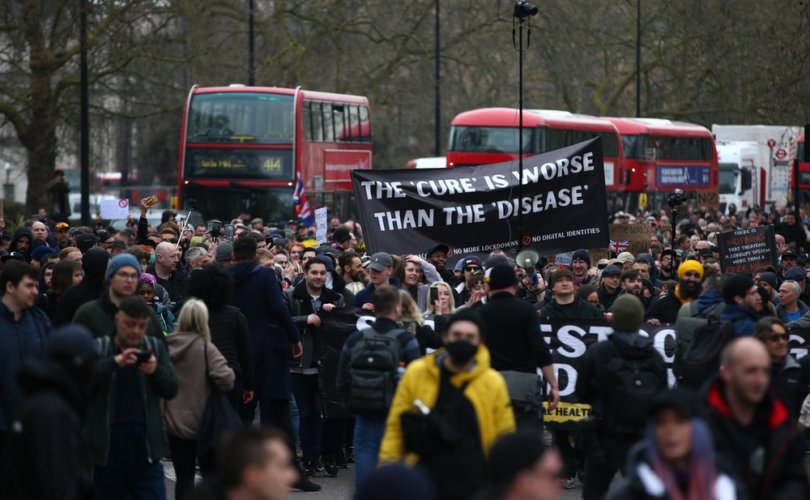 March 22, 2021 (LifeSiteNews) — A weary world took to the streets this weekend to demand an end to governments’ draconian coronavirus regulations that have become an oppressive fixture of life almost everywhere.

On March 20, marking the first anniversary of coronavirus lockdowns in several nations, participants in the “Worldwide Rally for Freedom” marched in Canada, the USA, Uruguay, Argentina, Ireland, Britain, Norway, the Netherlands, France, Belgium, Germany, Italy, Croatia, Serbia, Ukraine, Japan, and Australia, among other countries, to protest lockdowns, mask mandates, and the coercive promotion of the COVID-19 vaccines. In Britain, left-wing activists clashed violently with police as they showed their opposition to a proposed new law banning public protest itself.

In the United States, protests took place across the country from Cape Cod, Massachusetts to Huntington Beach, California.

“There were about 40 people,” Mulherin said, explaining that the winter-time population in Hyannis is very small.
“We had a lot of positive reactions from people driving by,” she continued.

“More positive than negative by far! Beeping, waving, thumbs up.”

Mulherin said that there was no police presence, and in fact some of the upturned thumbs came from officers driving past.

The message of the rally was “No mandates, no masks, no vaccines.”

In Britain, thousands of protestors took to the streets of their cities or traveled to London to join the mass demonstration there. The rallies had a particularly emotional dimension, thanks to proposed new legislation, called the Police, Crime, Sentencing and Courts Bill, that will crack down on demonstrations. As in earlier lockdown protests, London police beat several demonstrators, and they eventually ran from a shower of bottles. In Bristol, some “Kill the (anti-demonstration) Bill” demonstrators — called extremists by Chief Constable Andy Marsh — clashed violently with police, severely injuring some of the officers.

The largest rally, which took place in London, was formed from separate marches that ultimately mingled into one crowd numbering in the tens of thousands.

One London protestor, who accompanied an icon of Our Lady of Guadalupe during the protest, told LifeSiteNews that the rally he had attended Saturday was “worthwhile.”

“I've been on quite a few of these anti-lockdown events, and yesterday was the only one that I'd say was worthwhile,” said Alex.
“People can say ‘what does it achieve,’ but resistance breeds resistance at the end of the day,” he continued.

“I think it was very formidable. Things would soon change if that was happening every week. Incredible how Our Lady attracted so much attention and interest too.”

Alex didn’t see any violence where he was.

“Too many people for the police to brutalize in their usual fashion,” he surmised, adding that the large numbers of ordinary people instilled a “feeling of hope” he thought many had given up.

“There didn’t seem to be many nutters using it as a springboard for flat earth/lizard theory/Michael Jackson-is-still-alive weirdo issues,” he said.

“Just decent, normal people expressing their will to live without global totalitarianism.”

According to LifeSiteNews correspondent Michael Haynes, the anti-lockdown protest in Manchester was less exciting and certainly less well-attended than the massive rally in London.

“We had around 1,000, I'd say, but no issues at all, and we all just marched through the city out to the police HQ, to deliver crime reports against the council )local government) for their COVID rules,” he reported.

Yesterday, one of the largest global protests in history took place; people in 40+ countries gathered to demand their freedoms be restored, their rights be protected, and destructive lockdowns be lifted.

In Canada, demonstrators gathered in big cities such as Toronto, medium-sized locations such as London, Ontario — led by Church of God pastor Henry Hildebrant; and small, such as North Bay.

Rallies throughout the world numbered in the dozens or in the thousands, varying in both tone and relationship with the police. One word many rallies held in common, albeit in several different languages, was “freedom.”

In Amsterdam, rows of former soldiers stood at attention, forming a barrier between demonstrators and police in riot gear. One police officer was filmed poking a woman in the chest with a truncheon and then striking the man who leaped forward to protect her. The police also used water cannons, from which the demonstrators protected themselves with yellow umbrellas. One umbrella was emblazoned with the English word “love.”

In Spain, a group of protestors rescued a woman from the grasp of police by taking off their masks and advancing, shouting “Liberdad” (“freedom”) at them. Footage of the incident made it clear that the police were afraid of the protestors’ breath.
In Switzerland, protestors danced and sang in the street, and chanted “Liberté” at masked police officers.

In Milan, Italy, happy demonstrators threw off the metaphorical shackles of fear and the actual imposition of a mask mandate by giving each other hearty hugs. Protestor Fabio seemed to speak for them all when he said, “I want to return to living, OK?”

In Melbourne, Australia, hundreds chanted in protest against the premier of the state of Victoria, Dan Andrews. During at least one Australian rally, protestors carried the controversial “Eureka” flag, which signifies defiance against colonial, or otherwise unliked, civil authority. The signs of another Australian rally, mostly homemade, expressed strong resistance to “mandatory medication,” that is, coercive use of the COVID-19 injections.