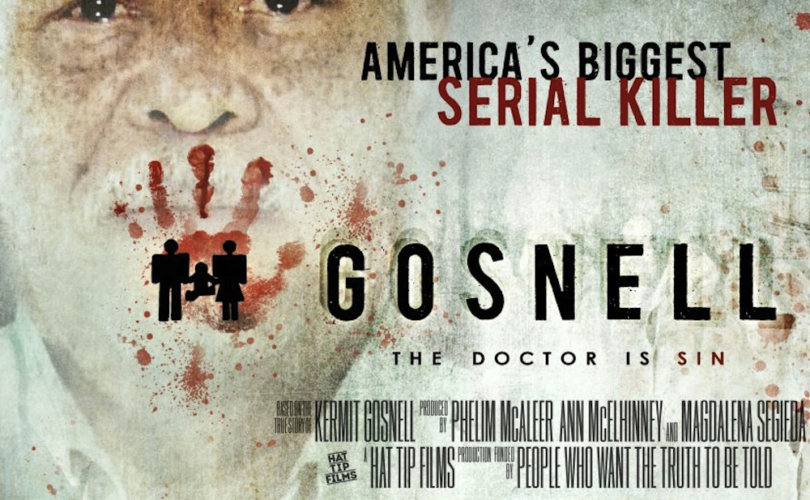 October 23, 2018 (LifeSiteNews) – Movie theaters across the country are dropping and blocking ticket sales of Gosnell: The Trial of America's Biggest Serial Killer despite – or perhaps because of – the film’s success, according to the film’s producer and marketing director.

Based on a similarly-titled book by journalists and producers Ann McElhinney and Phelim McAleer, Gosnell depicts notorious Philadelphia abortionist Dr. Kermit Gosnell’s arrest, trial, and conviction for the first-degree murder of three born-alive babies and the involuntary manslaughter of patient Karnamaya Mongar.

Prosecutor Christine Wechsler and Detective James Wood served as consultants on the film, which was also based “very heavily on actual court transcripts,” “dozens of hours of interviews with Kermit Gosnell” himself, and the 280-page grand jury report that found Gosnell killed hundreds of newborns who survived abortion by cutting their spinal cords.

Gosnell grossed $1,235,800 over its opening weekend, during which it was the most successful new release and 12th overall at the box office. It currently enjoys a 99% audience score on Rotten Tomatoes, based on more than 1,200 user ratings. Yet John Sullivan says theaters are dropping the film in a way that’s unheard of for a film performing this well.

“I can tell you from my experience in 15 years of releasing movies independently, we’re in uncharted territories,” Sullivan told the Daily Wire Friday. “It is an impacted fall, no doubt about it, but the fact that we’ve been dropped from theaters where the movie is the number 6 or number 9 movie is just something you don’t see.”

The movie broke into the Top Ten grossing films in its second week, but the number of theaters showing it has decreased from 668 to 480. Fifteen top-performing multiplexes were among those to stop showing it.

Sullivan granted that some of the smaller theaters would have likely decided to make room for the just-released Halloween sequel, a highly-anticipated entry in the long-running horror franchise, larger multiplexes doing the same couldn’t be explained so easily. “It’s hard not to believe it isn’t about the content of the movie,” he said.

“This is suppression of this film,” McAleer said. “You know that the mainstream media have been trying to close down Gosnell since the Gosnell story, since the moment it started. Don’t let it happen.”

“I’ve released a number of independent films, including the number [two] political documentary of all time,” Sullivan continued, referring to 2016: Obama’s America. “We faced problems there, but I’m getting reports of stuff too consistently for it not to be taken as something more than just a 16 or 17-year-old not doing their job at the local theater level.”

“One report out of Nashville had people being told the movie sold out simply because they didn’t have the staff to cover the theater, and they chose our theater to do that to,” he said. “Why? Too many things have stacked up and it just doesn’t smell right.”

These are far from the first reports of a concerted effort to prevent the film from being seen.

Every major Hollywood distributor rejected it, forcing producers to rely on crowdfunding. Judge Jeffrey Minehart, the trial judge in the case, tried to block both the film and book with a defamation suit. NPR objected to advertising text that referred to Gosnell as an “abortionist.” Planned Parenthood successfully pressured at least one venue to cancel private screenings.

Last week, McAleer revealed that Facebook has rejected numerous advertisements on vague grounds, such as that one somehow constituted “political speech.”

Pro-life and conservative activists and media figures are actively working to compensate by spreading the word about Gosnell’s importance. Numerous center-right voices have reviewed the film, generally agreeing it’s a well-crafted, powerfully-acted work that lays bare Gosnell’s crimes and abortion’s horror by letting the facts speak for themselves.

Gosnell ranked #14 for the October 19-21 weekend, according to Box Office Mojo. Directed by Hollywood veteran Nick Searcy from a script written by conservative novelist Andrew Klavan, it stars Searcy, Earl Billings, Sarah Jane Morris, Dean Cain, and more. Readers can find theaters that are still screening the film on its official website.