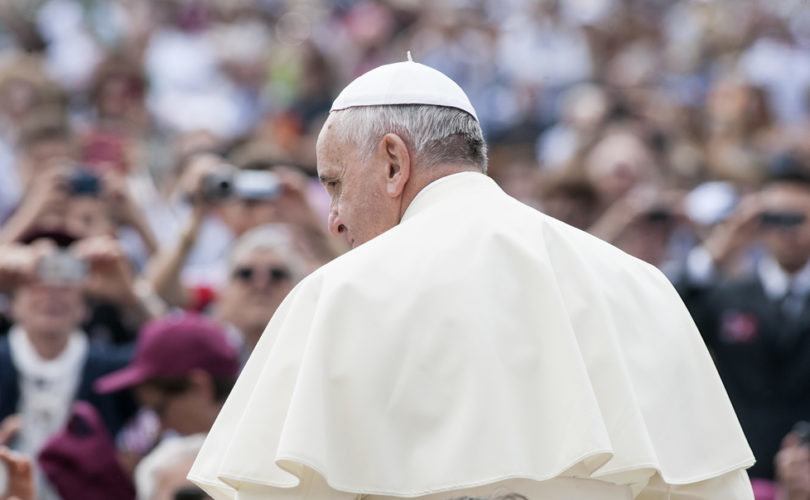 ROME, September 15, 2017 (LifeSiteNews) — Re-interpreting the Church’s teaching against contraception in light of Pope Francis’s teaching on marriage and family “would cause massive doctrinal and pastoral damage” to the Church, a moral theologian in Rome is warning.

Father George Woodall, who teaches moral theology at the Pontifical Athenaeum Regina Apostolorum in Rome, outlined what he called “grave” concerns about a papal commission recently set up by Pope Francis that will, he says, “re-examine Humanae vitae (HV) in the light of Amoris laetitia.” The article was published on the National Catholic Register September 12.

Pope Paul VI’s 1968 encyclical Humanae Vitae taught that “each and every marriage act must remain open to the transmission of human life,” calling the use of contraception (including the pill, condom, withdrawal, and other methods) “intrinsically wrong.” The encyclical celebrates its 50th anniversary next year.

Woodall listed the “precise points of doctrine” in the encyclical that he suspects the commission will re-examine. These include:

Woodall predicted that if the commission were to use the moral principles and language found in Pope Francis 2016 Exhortation Amoris Laetitia, it would recommend that Humanae vitae “should be rejected or, more likely, should not be interpreted legalistically.”

The commission would likely say, he said, that the encyclical should not be “imposed as burdens on couples unable to bear them by those wishing to cast stones at people in difficulties, but should be presented to them as mere 'ideals', which married couples should seek to fulfill, but which they might not be able always to fulfill in pressing circumstances and which, for a good intention — and perhaps through discernment, assisted by a pastor in the light of their unique circumstances — they might violate, set aside, or interpret creatively,” he said.

Just as the “pastoral approach” in Amoris Laetitia was used to suggest that the 6th commandment against adultery does not apply to some couples in “irregular” situations, so too in this case, said Woodall, a similar approach would be used to suggest that Humanae vitae does not “really apply to some couples because, in their circumstances they could not be expected to abide by them.”

Woodall said that if such an outcome from the commission were to be “incorporated in a formal magisterial teaching,” a “new pastoral crisis” would be unleashed.

“Such an outcome of the commission, were it to be endorsed and enacted in formal magisterial teaching…would cause massive doctrinal and pastoral damage because the Pope would be contradicting previous popes and “centuries-old tradition of Catholic moral doctrine of moral theology,” he said.

“Were any decision, as a result of the commission, to call [the Church’s teaching against contraceptive use] into question expressly or implicitly, in my view, it would do untold damage to the Church's magisterium, to respect for that Magisterium by Catholics and by others, to the capacity of the magisterium to teach effectively, to the Church's moral doctrine in general, and to the mission of the Church to combat the moral relativism that is the plague of the contemporary world,” he said.

Woodall said that the Magisterium “cannot invent moral truth” but is “bound by, the gospel of Christ, revelation, dogmatically defined truths and constantly taught doctrines which have been proposed definitively or as exception-less for the universal Church.”

Woodall’s concerns echo those of Catholic philosopher Dr. Josef Seifert. In an article published last month, Seifert argued that if Pope Francis is right in Amoris Laetitia that committing the intrinsically evil act of adultery is  — to quote the exhortation — “what God himself is asking” of couples in “irregular” situations, then there is nothing stopping any other intrinsically evil act, such as contraception, from being justified.

Woodall’s concerns are also shared by Cardinal Raymond Burke, who told The Wanderer last month that no matter what the Papal commission determines, the teaching found in Humanae Vitae cannot be changed.

“It is the infallible teaching of the Church that contraception is intrinsically disordered, that to separate the unitive and procreative aspects of the marital act is always and everywhere wrong,” he said at that time.

“If this teaching is not upheld, not only is there a violation of the conjugal act in its essence, but there would then be an opening for all kinds of immoral activity involving our sexual faculties while people would justify sinful genital acts,” he added.

The Vatican plan to ‘reinterpret’ anti-contraception encyclical is real

Has Pope Francis set up a secret commission to ‘re-examine’ birth control? Let’s hope not.