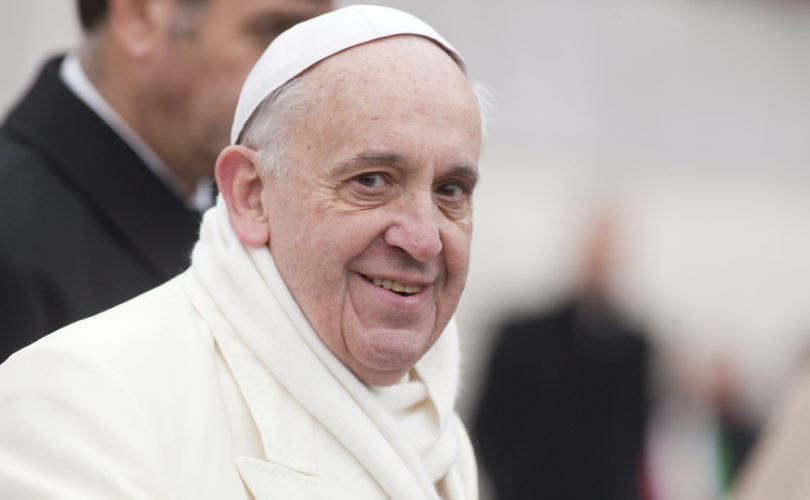 December 14, 2018 (LifeSiteNews) – Homosexuality is an important issue for discussion at the Vatican’s upcoming summit on abuse, but will most likely not be brought up unless Pope Francis himself introduces the topic, according to Fr. Thomas Weinandy, OFM Cap, former executive director of the U.S. Conference of Catholic Bishops Secretariat for Doctrine and Pastoral Practices.

“This is an important issue since it has become apparent that some members of the clergy, including bishops, engage in homosexual activity,” said Weinandy in a just published interview with National Catholic Register journalist Ed Pentin.

“It is known that they prey upon seminarians and young men. There is also the problem of ‘gay networks,’” continued Weinandy. “Such behavior cannot be tolerated.

“The February meeting desperately needs to address these issues, if the meeting is to be taken seriously,” he added.

The Capuchin theologian said the Pope’s recent remarks declaring that there is no room for homosexuality in the priesthood might not have any real impact on the February Abuse Summit.

“The problem is that the Pope has to act on his own words,” said Weinandy. “If he himself does not actively engage the issue, no one else will.”

“Without his actively engaging the issue, no one will take him seriously. This is because the Vatican seems at times to promote ‘the gay agenda,’” added Weinandy. “We only have to look at the Week on Marriage and Family Life that took place in Dublin and the Synod on Youth.”

“What we have learned is that what Pope Francis says has little meaning in and of itself,”  The real Pope Francis is only seen within his actions, and his actions often are in conflict with his words. So if Francis insists on specific actions and if he himself actually does something, then what he says could have an effect upon the conference.”

Weinandy thinks Pope Francis’ choice of Chicago Cardinal Blase Cupich to head the committee preparing for the Abuse Summit is an indication that Pope Francis wants to steer away from discussion about homosexuality within the Roman Catholic priesthood.

“My guess would be that Cardinal Cupich would not want to engage this issue. He is one of the promoters of ‘the gay agenda,’” said Weinandy.

Weinandy notes an oft-repeated pattern in the current papacy, recognized by many Vatican observers.

In May, Pope Francis told the bishops of Italy to exercise an “attentive discernment” regarding cases of possible homosexuality among potential seminarians. “If there is even the slightest doubt, it is better not to let them enter,” the Pope told them.

Those remarks came in the wake of a widely-reported conversation between Francis and Chilean sex abuse victim Juan Carlos Cruz, who identifies as “gay,” which gave rise to grave concerns about the integrity of the faith on the subject of homosexuality. In comments the Vatican refused to deny or confirm, the Pope allegedly said, “Juan Carlos, that you are gay does not matter. God made you like that and he loves you like that and I do not care. The Pope loves you as you are, you have to be happy with who you are.”

Cardinal Cupich, who has notably dismissed Archbishop Carlo Viganò’s testimony on the Archbishop Theodore McCarrick abuse cover-up as a mere “rabbit hole” distracting the Church, believes that homosexuality is not a significant contributing factor in the abuse of minors (despite statistics showing otherwise), and has defended the Vatican postponing U.S. bishops from voting on measures to prevent abuse cover-up.

The Chicago cardinal is also among those endeavoring to fault “clericalism” for the sexual abuse crisis while also working to downplay the element of homosexuality in the priesthood.

“What I do know is that if the bishops focus on clericalism, you then know it’s not going to amount to much,” Fr. Weinandy previously told LifeSiteNews regarding the February Summit.

Last year, Fr. Weinandy was asked to resign as the USCCB’s consultant after telling Pope Francis in a letter that his papacy is marked by “chronic confusion,” and that the pope teaches with “a seemingly intentional lack of clarity.”

That lack of clarity “inevitably risks sinning against the Holy Spirit, the Spirit of truth,” the priest wrote.

The Capuchin said as well the pope’s manner “seems to demean the importance of Church doctrine.”

And he told Francis that believers are scandalized – not just by his appointment of bishops who not only “hold views counter to Christian belief but who support and even defend them” – but also by the fact he seems “silent in the face of their teaching and pastoral practice.”

As a result, Weinandy told Pope Francis, many among the faithful “are losing confidence in their supreme shepherd.”

Weinandy, whose tenure as a member of the Vatican’s International Theological Commission will soon end, previously served as Warden (President) of Greyfriars College at Oxford University.