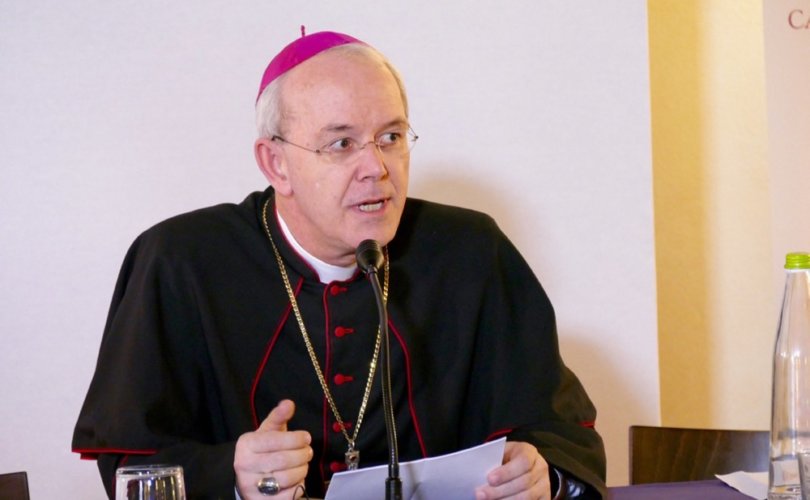 ROME, May 17, 2016 (LifeSiteNews) — In the midst of the crisis in the Church, Bishop Athanasius Schneider of Kazakhstan warned Catholics at a conference in Rome last week to be aware of interpretations of Catholic doctrine that wear a “deceptive appearance of truth” while departing from the real doctrine of the faith.

Reading and commenting on texts from the First Vatican Council (1869-70) about the fact that the truths of the faith are revealed by God — and therefore cannot be changed or called into question — Schneider noted that it is “our situation today” that there are some within the Church who, while having accepted the faith under the guidance of the Church, are now seeking to change that faith and are even calling the deposit of faith into question. He spoke on May 6 at the Rome Life Forum, which took place at the Hotel Columbus just steps away from St. Peter’s Basilica.

The bishop read directly from a 1870 portion of the Council declaration dealing with faith and reason, which stated that the doctrine of the faith, as revealed by God, cannot be “perfected by human intelligence” but is a “divine deposit committed to the spouse of Christ to be faithfully protected and infallibly promulgated.”

“Hence, too, that meaning of the sacred dogmas is ever to be maintained, which has once been declared by Holy Mother Church, and there must never be any abandonment of this sense under the pretext or in the name of a more profound understanding,” Schneider quoted the Council fathers saying.

He read from the same Council that those in position of authority within the Church, especially the pope, have as their duty the “warding off and elimination of errors from the Church” in order to safeguard the “spreading of the light of the pure faith.”

Commenting on this, he said: “So, it is claritatis laetitia, the joy of clarity, [that is now required],” he said, adding that the Council’s insight was “very, very up to date.”

Schneider then went on to quote extensively from Pope St. Pius X, who in 1903 warned the faithful that a “sacrilegious war is now, almost everywhere, stirred up and fomented against God.”

He continued quoting Pius X: “Such, in truth, is the audacity and the wrath employed everywhere in persecuting religion, in combating the dogmas of the faith, in brazen effort to uproot and destroy all relations between man and the Divinity! While, on the other hand, and this according to the same apostle (cf. 2 Thess. 2: 3) is the distinguishing mark of Antichrist, man has with infinite temerity put himself in the place of God, raising himself above all that is called God; in such wise that although he cannot utterly extinguish in himself all knowledge of God, he has contemned God’s majesty and, as it were, made of the universe a temple wherein he himself is to be adored.”

Schneider commented that Pope Pius X’s analysis can be “fully applied” to the current time. “It was for me a discovery how prophetical [are his words]. This pope had a vision, and examined the real situation,” he said.

He commented further: “This is very up to date. All the issue of the ecology — the natural temple where man is in the centre — this was already spoken by Pius X. I am convinced that Pius X would not be so happy with this ‘ecology ideology’ which is today spreading within the Church.”

Quoting more from Pope St. Pius X about the duty of Church shepherds to lead all mankind under the dominion of Christ through the Catholic Church, he commented: “This is the first task of the Pope and of the bishops: To bring back human society to the discipline of the Church.”

The bishop then went on to quote from Pope Pius XII’s 1939 encyclical Summi pontificatus about hatred of God leading to the voice of conscience being silenced: “When God is hated, every basis of morality is undermined; the voice of conscience is stilled or at any rate grows very faint, that voice which teaches even to the illiterate and to uncivilized tribes what is good and what is bad.”

The bishop continued quoting from Pius XII who spoke about the Catholic Church — “whose King is Truth, whose law [is] love — “preaching fearlessly the whole truth of Christ.”

He commented about the priority of truth in the Church when compared to love. He made a passing reference to the doctoral ambiguity and resulting confusion found in Pope Francis’ recent Apostolic Exhortation.

Schneider then went on to quote Pius XII’s admonition to the “suffering and agonizing members of the Church” — whose “courageous profession of the Faith entails today hard, painful and not rarely, heroic sacrifices” — to pray.

Bishop Schneider concluded his talk with Fulton Sheen’s account on how the faithful must learn to recognize the coming of antichrist at the end times.

“He will not wear red tights, nor vomit Sulphur, nor carry a trident nor wave an arrowed tail…Rather is he described as an angel fallen from heaven, as ‘the Prince of this world,’ whose business it is to tell us that there is no other world,” he quoted from Sheen.

At the end of this talk, Bishop Schneider prayed with conference participants for Pope Francis.

“He is the vicar of Christ. We have to pray very much for him,” he said.