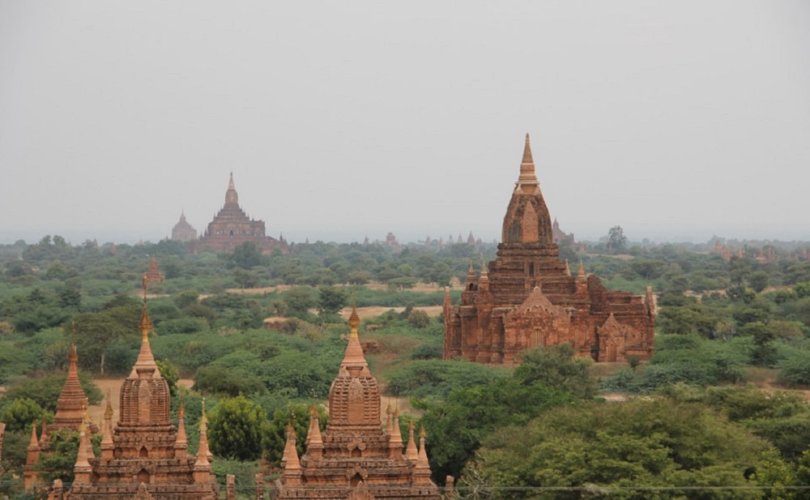 April 6, 2018 (Population Research Institute) – Northern Myanmar – the country we used to call Burma – is the site of a brutal and ongoing ethnic cleansing campaign. It is well known that the Rohingya, a Muslim ethnic minority from the north-western Burmese state of Rakhine, are systematically persecuted and that large numbers are fleeing across the border to India.

What is less well known is that they are also being subjected to a rigorous population control program designed to reduce the birth rate among those who remain.

Local Buddhist monks and hardline Buddhist-nationalist politicians in the state of Rakhine see the Rohingya as a threat to their ethnic and religious identity.  Even though Rakhine Buddhists outnumber Rohingya Muslims by approximately 2-to-1, there is concern among some Rakhines that the population increase of Rohingya threatens to displace them.

The findings of an investigative commission established in 2012 by Myanmar President Thein Sein makes this clear:

One factor that has fuelled [sic] tensions between the Rakhine public and Bengali populations relates to the sense of insecurity among many Rakhines stemming from the rapid population growth of the Bengali, which they view as a serious threat.

“The population growth of Rohingya Muslims is 10 times higher than that of the Rakhine…Overpopulation is one of the causes of tension,” a spokesman for the Rakhine state government was reported to have said.

In response, local officials in Rakhine have implemented a variety measures to reduce the Rohingya population including a rigorous two-child policy and onerous marriage restrictions.

For over a decade, Rakhine townships have placed a strict two-child policy on Rohingya. While Rakhine is home to several ethnic groups, the policy only applies to Rohingyas. Couples who exceed their two-child limit can be punished with imprisonment for as long as 6 months for violating an order of a public servant under Section 188 of Myanmar's penal code.

In order to have a marriage license approved, newlywed Rohingya couples are required to sign a document stating that they will not have more than two children. Previously, Rohingya couples were allowed up to three children, but in 2007, the limit was decreased to two.

Much like China's two-child policy, over-quota children under the Rakhine policy are considered illegal and are ineligible for birth registration. Without registration and a government ID, these “illegal children” are not able to attend school, own property, apply for travel permits, or to get married later in life.

Some Rohingya parents resort to paying off government officials with repeated bribes in order to evade penalties. Some women, to escape fees and penalties, flee to Bangladesh to give birth to an over-quota child and are subsequently forced to leave their children behind when they return.[1] Others opt to hide their children from the authorities or register them with another family that has not filled its quota. Still others feel forced to resort to abortion in order to escape penalties.

The government also makes it difficult for Rohingya to register births. Obtaining birth registration is a lengthy process and there are often unofficial fees or bribes necessary to have a child registered.[2] The result is that many children remain unregistered.  The Burmese Government estimates there are 60,000 unregistered Rohingya children in Rakhine.

Much like China's two-child policy, Rakhine policies also prohibit out of wedlock births, effectively enforcing a zero-child policy on single women and on married couples who have not had their marriages authorized by the state.

While some in Myanmar, including State Counsellor Aung San Suu Kyi have condemned Rakhine's two-child policy as “against human rights,” the policy has received widespread acceptance, even among officials in the national government.

In a 2013 interview with Reuters, Burma's Minister of Immigration and Population Khin Yi expressed his support for the two-child policy and saying, “The Bengali [i.e. Rohingya] women living in the Rakhine State have a lot of children. In some areas, one family has 10 or 12 children … It is not very easy to take care of the children.”

In 2015, President Sein signed into law the “Race and Religion Protection Laws” which allow local officials to impose mandatory 36-month birth spacing on the basis of areas where there are “a high number of migrants in the area, a high population growth rate and a high birth rate.” This was an unmistakable reference to Rohingya and other minorities.[3] Implementation of this restriction is at the discretion of local officials, a virtual carte blanche to Rakhine officials who already actively impose rigorous population control policies exclusively on Rohingya.

Most restrictions on Rohingya, including the two-child policy, are enforced by the Burmese border patrol, the Nay-Sat Kut-kwey Ye (NaSaKa), an agency consisting of police, military, and immigration officials. It is believed that township orders circulated among the NaSaKa provide some of the legal basis for the policy. For instance, in Maungdaw, a township with a large Rohingya population which borders Bangladesh, official government documents obtained by to the human rights organization Fortify Rights stipulate that “those who have permission to marry must limit the number of children, in order to control the birth rate so that there is enough food and shelter.”[4]

In addition to the two-child policy, local regulations in Rahkine also impose other population control measures including burdensome restrictions on Rohingyas' right to marry. For decades, Rohingya, like all other ethnicities in Myanmar, were free to marry according to their own customs. But in the early 1990s, in the interest of limiting the Rohingya population, the NaSaKa began requiring Rohingya to obtain permission to marry from the government.[5]

In order to have a marriage approved, Rohingya couples must meet with government officials multiple times, and must be accompanied by their parents.[6] Couples must present a photo of themselves to officials and contrary to Muslim custom, men are often required to be pictured clean-shaven and women, without hijab.[7],[8] In many villages, only a few marriages are authorized each year and some couples wait years before obtaining approval from the Government.[9] Widows and widowers are required to wait at least a year after the death of their spouse before they can apply for a second marriage.[10]

In order to have a marriage application approved, Rohingya couples are required to pay exorbitant fees or bribes to officials typically equivalent to 3 to 10 months' wages.[11],[12],[13] Due to discriminatory policies that severely limit Rohingyas' mobility, education, and job opportunities, most Rohingya are poor and for many, the cost of marriage is prohibitively expensive. Some Rohingya couples have been forced to leave Myanmar in order to escape marriage penalties and fees.[14]

Couples who choose not to apply for government authorization for their marriage can face severe penalties. Men who are found living with a woman after having been married under Islamic Law but without government permission or who are found cohabiting are subject to both a fine and a prison sentence up to 10 years.[15] Sentences are sometimes reduced if they agree to pay exorbitant bribes to officials. In 2013, CNN reported that over 500 men were serving time in prison for unauthorized marriages in Buthidaung Township alone.

Local regulations in Rakhine also encourage Rohingya to use birth control. Maungdaw Township Regional Order 1/2005, obtained by Fortify Rights, outlines several “population control activities” for the NaSaKa to implement including “making people use” contraceptive pills, injections and condoms.[16] The regional order also calls for campaigns to “educate” women on birth control methods “for their participation in these matters.”[17]

Unlike Rakhine's two-child policy and marriage restrictions, however, where enforcement is well documented, it appears that birth control requirements have not been implemented with the same fervor. Contraceptive prevalence in the state of Rakhine is below the international average and remains one the lowest in Myanmar.[18] However, Rohingya women have reportedly been forced to accept contraceptive pills and injections during hospital stays.[19]

International organizations over the years may have also unwittingly helped to provide some of the government's desired outcome on birth control measures. It is known that international organizations including the United Nations Population Fund (UNFPA), Malteser International, and Aide Medicale International in the mid-2000s provided oral contraceptives and other forms of birth control in Rakhine, principally in Maungdaw and Buthidaung townships,[20] even after Maungdaw Township Regional Order 1/2005 was in effect. It is estimated that Rohingya and other Muslims account for 95% of the population of Maungdaw and Buthidaung townships.

According to Fortify Rights, “Such measures are viewed by the Rakhine State and central governments as “population control” measures.”

To ensure compliance with policy restrictions, NaSaKa conduct periodic random “spot checks” of private homes, checking households against official registration records to ensure there are no “illegal” persons living in the house.

Under the Maungdaw policy, all Rohingya households are required to have a family photo taken at a public location in the village.[22] Officials then conduct periodic “spot checks” to ensure that there are no extra or unaccounted for persons in the household and that they match registration records.[23] Children are “compared in age and appearance” against the official records and mothers are made to breastfeed infants in the presence of officials to ensure that no child has been registered with another family in an effort to evade the two-child policy.[24] Maungdaw regulations stipulate that “action must be taken” with any “illegal children,” “illegal immigrants,” or any other unaccounted-for persons found in the house including household guests that have not been reported to the authorities.[25]

“Population control programs are always a matter of a majority – be it ethnic, religious, or class-based – targeting a minority,” says PRI President Steven Mosher. “Nowhere is this more clearly illustrated than in northern Burma, where an ethnic and religious ethnic majority is targeting a depised ethnic and religious minority. The goal is clearly to eliminate the Rohingya from Burma by any means possible, including contracepting and sterilizing their children out of existence.”

[5] Irish Centre for Human Rights, National University of Ireland, Galway, Crimes against Humanity in Western Burma: The Situation of the Rohingyas 126-127 (2010).

[8] Irish Centre for Human Rights, National University of Ireland, Galway, Crimes against Humanity in Western Burma: The Situation of the Rohingyas 127 (2010).

[11] Irish Centre for Human Rights, National University of Ireland, Galway, Crimes against Humanity in Western Burma: The Situation of the Rohingyas 127-128 (2010).

[13] Human Rights Watch, “All You Can Do Is Pray”: Crimes against Humanity and Ethnic Cleansing of Rohingya Muslims in Burma's Arakan State 80-81 (2013).

[21] Reforms must be undertaken for financial and legal institutional development during the drafting process of monetary and capital market law: MPs, The New Light of Myanmar, Vol. XX, No. 3, Aug. 1, 2012, at 9.