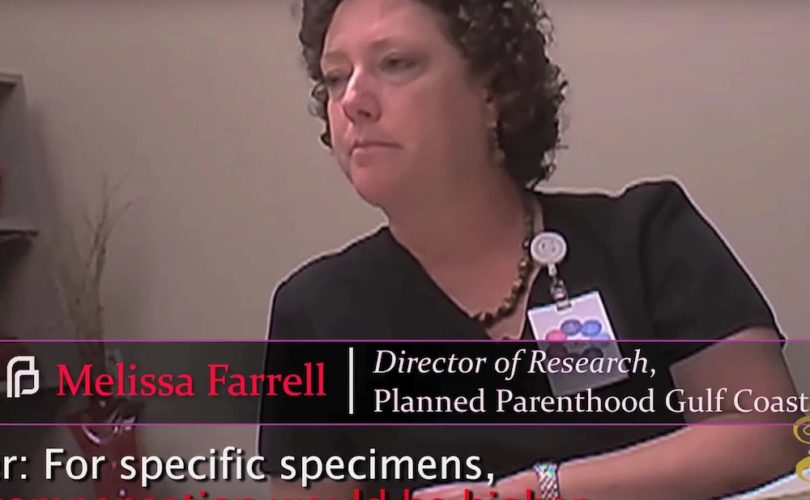 Sign the petition to Harris County urging them to drop the charges against David Daleiden and Sandra Merritt.

HOUSTON, February 3, 2016 (LifeSiteNews) – On the day before David Daleiden turns himself in for allegedly trying to purchase human organs, the investigator has released a new video compilation showing Planned Parenthood officials agreeing to sell fetal organs.

The Center for Medical Progress had released the full video featuring Melissa Farrell, director of research at Planned Parenthood Gulf Coast (PPGC), discussing how PPGC could word its billing to make it appear its activities were within the law.

In a new extract, CMP features Farrell discussing payment terms that may violate laws against trafficking in human organs or tissue.

The undercover investigators catch Farrell describing the terms of a previous contract to provide “specimens” for medical research in exchange for money.

“Based on what I'm reading here, it looks like [the client is] paying for the specimen itself,” she said. At the time of the budget she looked at, the consent fee was $25, she said smiling as she mentioned the dollar amount.

“There's margin,” she said, adding that her department “contributes so much to the bottom line of our organization here.”

Trading human biological material for “valuable consideration” is a felony under both federal and Texas state law, yet the Harris County grand jury ignored Planned Parenthood and indicted Daleiden and Sandra Merritt for using false IDs.

“I think definitely an ala carte approach would be the best,” Farrell tells the pair, who posed as agents of a biologics firm searching for material to use in experiments.

Farrell added that she had to carefully word the request for abortionists to alter the abortion procedure for reasons other than medical necessity for the mother, a violation of medical ethics.

Instead of altering the procedure, they would perform “a modification” so that “we're doing it in a way that we are preserving the integrity of the specimen,” she said.

Daleiden said that the new charges, which could land him behind bars for 20 years, are an attempt to silence him.

Echoing his exclusive comments to LifeSiteNews last week, Peter Breen of the Thomas More Society said, “The charges against David Daleiden are legally and factually baseless.”

The investigative team use undercover techniques and “caught Planned Parenthood staff discussing how to adjust accounting line items to conceal profits from baby body part transactions. Planned Parenthood’s lawyers in Houston have now admitted they dreamed up and demanded the charges against David, apparently in order to distract prosecutors and the public from their own bad acts.”

The case has generated broad interest well outside the United States or the confines of the pro-life movement.

Last night, more than 4,000 people took part in a webinar on the status of Daleiden's case. Tomorrow, LifeSiteNews will take part in a press conference delivering more than 100,000 petitions demanding all charges against the pro-life investigators be dropped forthwith.

“We intend to seek to have these charges dismissed at the earliest opportunity,” Breen said.