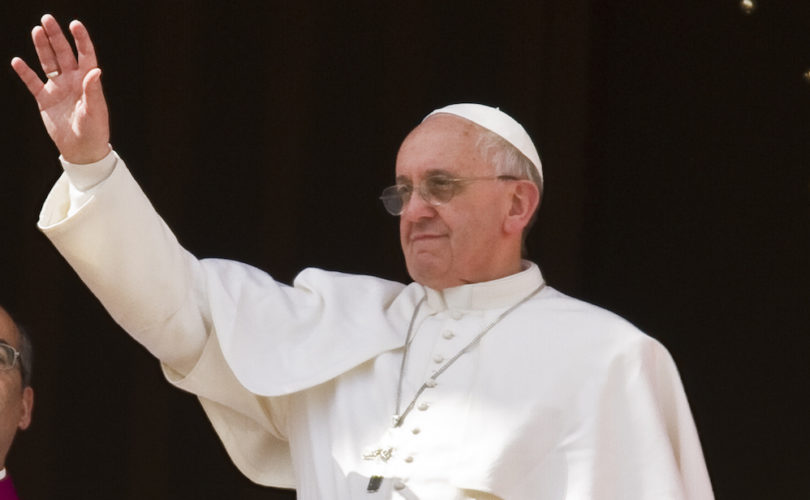 March 11, 2016 (LifeSiteNews) – The news of Pope Francis’ praise for Italian abortionist and leftist activist politician Emma Bonino has caused a stir among Catholics worldwide. Some English-speaking Catholics have defended the Pope’s remarks and condemned reports on them, while pro-life leaders, especially those in Italy, have expressed dismay.

Critics are arguing that the Pope’s dealings with major culture of death advocates is imitating Christ Himself. But is the pope’s praise of Bonino actually comparable to Christ dining with Zacchaeus?

Obviously not. Christ’s entire mission was focused on the call to repentance, and when He invited Himself to Zacchaeus’ house that was the clear purpose. As we know, Zacchaeus did indeed repent of his sins. When Pope Francis offers unqualified praise of Italy’s leading abortion advocate, calling her a “forgotten great,” it has the opposite effect. It confirms her in her error. It gives the impression that someone can still be one of Italy’s “greats” despite killing thousands of babies and promoting a host of moral evils. Essentially, those things aren’t important enough to tarnish a person’s record.

As I noted in a speech before Catholic pro-life leaders in Rome last year, pro-life and pro-family leaders would be rejoicing if the Holy Father was meeting with abortionists and promoters of homosexuality if it was clear that he was calling them to repentance.  Without that we are left with grave confusion. Francis has similarly caused confusion by celebrating Mass and exchanging gifts with the leading pro-homosexual priest in Italy, his greeting and embracing of his homosexual friend and the friend’s homosexual partner, and his appointment to the Synod on the Family of cardinals and bishops openly at odds with Church teaching on life and family.

The Pope’s praise for Bonino is comparable to him praising Planned Parenthood President Cecile Richards for her work promoting STD testing without referring to her far more prominent work directing the largest abortion provider in the United States. Of course, the Pope did not praise Bonino as one of Italy’s “forgotten greats” because of her work on abortion – he was lauding her work with refugees.

Some have argued that linking the Pope’s praise to her abortion work is irresponsible journalism. But if the Pope praised Cecile Richards as a “forgotten great,” pro-life Catholics in the U.S. would rightly be alarmed. It’s no different for Bonino, and that explains why pro-life Italians have reacted so strongly.

Former US ambassador and presidential candidate Dr. Alan Keyes has rightly asked, “Is Pope Francis blind to the fact that his praise for Bonino will be used to throw the lustrous vestments of the Papacy around the shoulders of the whole abortion movement, in order to enhance the glamor of evil?” Dr. Keyes expressed concern that the Holy Father’s “accolades” for Bonino, which he says “simply disregard God’s standard of righteousness,” would “deepen the morally inverted sensibility that calls evil, good and good, evil.”

Suggestions that the Pope did not know about Bonino’s controversial stances are dismissed by Italians since she was famously arrested for illegal abortions and then became a politician who has led the fight for the legalization of abortion in the nation. As well, for many years she has promoted euthanasia, homosexual “marriage,” legalization of recreational drugs, graphic sex education, and more.

Beyond that, Pope Francis has been acquainted with Bonino and the Radical Party leadership for years and been openly criticized for his warm relations with them, which have never involved open calls to repentance.

In her capacity as Italian foreign minister, Bonino, along with President Georgio Napolitano and his key ministers, was granted an audience with Pope Francis on June 8, 2013. In April 2014, Bonino called Pope Francis to help end the hunger strike of Radical Party leader Marco Pannella. The Pope made the call and promised to join Pannella in his bid to better conditions in Italian prisons.  In May 2015 the Vatican Insider reported that Pope Francis personally invited Bonino to an audience in the Paul VI Hall. Finally, Eugenio Scalfari, the controversial anti-Catholic reporter to whom Pope Francis continues to give private interviews despite numerous scandals, is a founding member of the Radical Party.

Here’s what leaders of the most significant pro-life groups in Italy are saying about the Pope’s praise for Bonino:

Starting in 1968 Emma Bonino has been in Italy the symbol of transgression . With Marco Pannella, she has been the leader of all campaigns against life and family: they brought in Italy the law on divorce (1970), on abortion (1978), the legalisation of drugs (in different steps) and now homosexual unions. With our association Famiglia Domani we organized several campaigns against Emma Bonino beginning in the late 80s until very recent years when she has been Minister of Foreign Affairs and then a candidate as President of the Republic.

Pope Francis' role does not require a deep knowledge of all personalities, but it goes without saying that when he speaks of a specific, publicly well known person, he cannot ignore who is he talking about. Especially because everybody knows who Emma Bonino is and what has she done to destroy the Christian roots of Italy.

As laymen it is our duty to criticize the person that is seated on Peter 's chair when our conscience tells us he is wrong, as the Pope is infallible only when he talks ex- cathedra. We must pray that the Holy Spirit brings Francis on the right road which is the Gospel and the Magisterium.

The Pope was not really informed about how much Mrs. Bonino has done in Italy and at international level for promoting abortion and euthanasia. She did well in Egypt but also there she promoted her anti-life values. The Pope was wrong, and worse were the members of His secretariat for not informing him”.

How can the pope praise a woman that is best known in Italy for practicing illegal abortion and promoting abortion?

As Christian politicians increasingly struggle to remain true to pro-life and pro-family stances in public office and endure much criticism, it is harmful for the Pope to openly praise, without clear and necessary qualifications, a politician such as Bonino. It undermines the sacrifices many pro-life politicians have made and may even bring them to question the need to remain solid in their voting patterns.  It also undermines decades of heroic efforts by Italian pro-life leaders who have actively opposed Bonino’s anti-life and anti-family actions.

When the Holy Father openly criticizes Donald Trump for building walls, thus criticizing his immigration policies, but then in the same press scrum says he won’t comment on Italy’s same-sex civil union legislation (“Because the pope is for everybody and he can’t insert himself in the specific internal politics of a country,” he argued), it makes many wonder about his priorities.