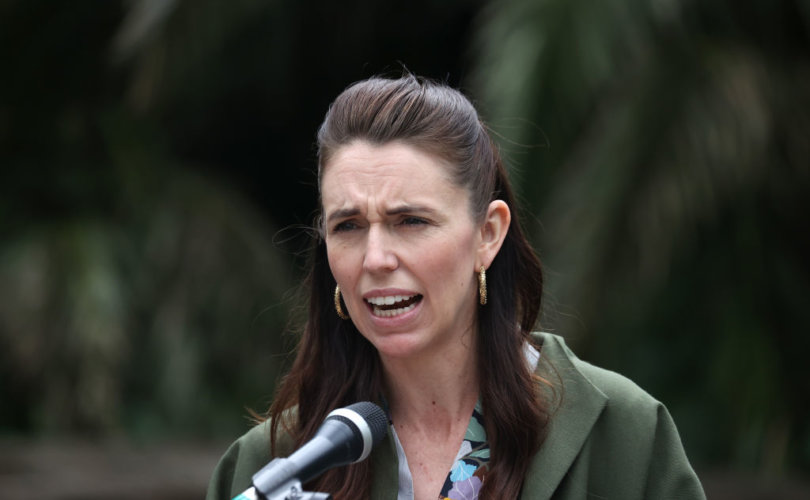 (LifeSiteNews) — New Zealand’s authoritarian Prime Minister Jacinda Ardern has said that the country’s COVID shot program will have no end, warning that “so long as there’s people who are eligible who haven’t been vaccinated, we’ve got work to do.”

In an interview Tuesday with New Zealand network Newshub, Ardern characterized the experimental COVID shots as a “really important” measure “to protect our people” and thus declared that “there’s not going to be an endpoint to this vaccination program.”

Speaking specifically about New Zealand’s native Maori population, Ardern noted that some 83 percent have taken the first shot. This high uptake, however, has proved unsatisfactory to the COVID-obsessed politician, who said that she is “obviously chasing with those second doses.”

“There’s been a huge focus on making sure we are reaching everyone, wherever they are in the country and ensuring that we are overcoming those barriers,” Ardern informed viewers.

The prime minister explained that “so long as there’s people who are eligible who haven’t been vaccinated, we’ve got work to do,” adding, “I don’t think I will ever be satisfied as long as there’s somebody … who is eligible and hasn’t been [jabbed].”

However, the jab program has not been limited to those who have not yet received one of the abortion-tainted shots, with Ardern focusing a portion of her efforts on continuing to jab those who already completed a two-shot cycle previously.

“We are obviously rolling out boosters now, so we’ve got another wave of people we need to make sure we’re protecting again,” she said. “Those who were vaccinated six months ago, we really need them to come back or we need to go to them.”

Commenting on the supposed fourth wave of the virus, said to be sweeping across the northern hemisphere, Ardern said that now is the time to ramp up the booster campaign in New Zealand, unqualifiedly claiming that the boosters are “the thing that’s making a difference” in countries where the benign omicron variant has spread.

“We have got the opportunity now, and the safety of summer, to make sure that we are reaching all of our older citizens and making sure they have their booster. That’s really, really critical.”

“It brings your immunity back up to where it was when you were first vaccinated,” she stated.

In Israel, where booster shots have been available since August, studies have shown that immunity from the jab decreases dramatically within three months, suggesting a perpetual need for regular doses in order to keep the virus at bay, all the while exposing citizens to risks known and unknown.

While Ardern backs receiving COVID jabs indefinitely, supposedly for the benefit of one’s health, she has previously admitted to intentionally creating a class separation system between the jabbed and the un-jabbed.

NEW – New Zealand Prime Minister Jacinda Ardern, when asked by a reporter if she was creating two classes of people, with the vaccinated receiving special privileges, confirmed, “That is what it is, yep”.pic.twitter.com/4VDULQN7Xd

During an interview with the NZ Herald, Ardern was asked whether she had intended to segregate society, affording rights to those who receive the shot while withdrawing those same freedoms from those who do not.

“That is what it is, yep,” she nonchalantly replied, with a grin.

Footage from 2020 showed the island nation’s prime minister determining that citizens can “trust” the government and public health authorities to be “your single source of truth” regarding all things COVID.

“We will provide information frequently. We will share everything we can,” she said, advising that “[e]verything else you see — a grain of salt.”

The push to vaccinate the majority of the world’s population in order to prevent serious disease for those who are not at risk to begin with — the CDC reports an infection survival rate of greater than 99.95% for those under age 50 — adds to the skepticism surrounding the increased push for COVID booster shots.

Meanwhile the list of FDA-recognized adverse events has grown from severe anaphylactic reactions to include fatal thrombotic events, the inflammatory heart condition myocarditis, and neurologically disabling disease like Guillain Barré Syndrome, as well as thousands of recorded deaths and permanent disabilities.