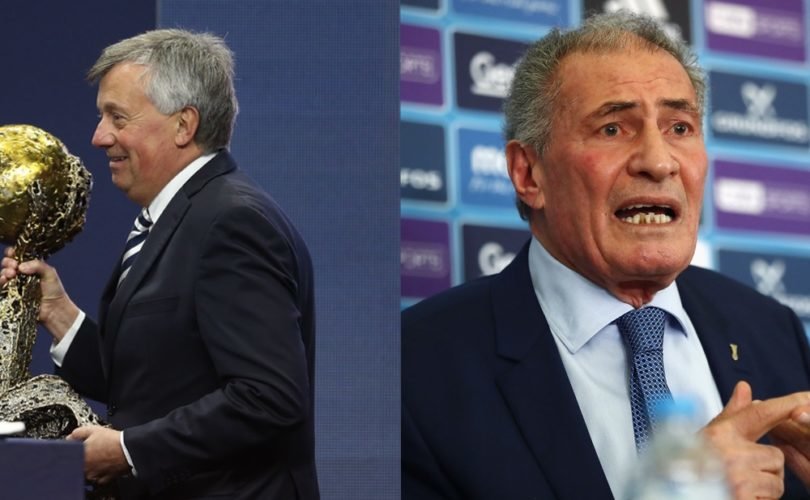 BULGARIA, July 28, 2021 (LifeSiteNews) –The Norwegian women’s beach handball team faced fines after they played a match in shorts instead of the mandatory bikini bottoms.

Moustafa has been president of the IHF since 2000. Last June the Egyptian Olympic committee named him its “Lifetime Honorary President” for the role he played in promoting both handball and the Olympics in that country.

Wiederer has been involved in handball associations since 1974.

The head of the Playing Rules and Referees Commission for IHF, Ramón Gallego, abruptly resigned this year due to “political pressure,” according to his tweet.

According to International Handball Federation regulations, male players are permitted to wear tank tops and shorts no longer than 4 inches above the knee.

On the other hand, women are forced to wear midriff-baring tops and bikini bottoms “with a close fit and cut on an upward angle toward the top of the leg” and a maximum side width of just 4 inches.

— Article continues below Petition —
PETITION: Stand with Hungary for protecting children from LGBT propaganda
Show Petition Text
44259 have signed the petition.
Let's get to 45000!
Thank you for signing this petition!
Add your signature:
Show Petition Text

As a result, the team was fined 1,500 euros ($1,700) for “improper clothing,” according to a statement from the European Handball Association's Disciplinary Commission. The members of this commission are not named on the EHA’s website.

Norwegian Handball Federation President Kåre Geir Lio said, “It's not [appropriate clothing for] the activity when they are playing in the sand.”

He explained that the female team trains and competes in “what they want, like the boys” when at home in Norway. However, when playing abroad, the team is subject to the International Handball Federation's clothing rules.

The team had petitioned to be allowed to play in shorts, but in response the EHA threatened to fine or disqualify the team. Nevertheless, on Sunday the players decided to protest and wear shorts.

Player Katinka Haltvik told Norwegian broadcaster NRK, “It was very spontaneous. We thought, ‘Let's just do it now, and then see what happens.’”

Lio said, “I got a message 10 minutes before the match that they would wear the clothing that they were satisfied with. And they got our full support.” This decision was met with approbation both in Norway and abroad, shared over social media.

In response to news that the team had been fined, Norway’s Minister of Culture tweeted in Norwegian, “This is completely ridiculous! How many attitude changes are needed in the old-fashioned international patriarchy of sports?”

“Will you PLEASE tell us why it is necessary for the female beach handball players to wear bikini briefs? Why are the shorts the Norwegian team wore deemed unlawful? And why are the men allowed to wear regular shorts instead of Speedos?” another tweet reads.

@ihf_info Will you PLEASE tell us why it is necessary for the female beach handball players to wear bikini briefs? Why are the shorts the Norwegian team wore deemed unlawful? And why are the men allowed to wear regular shorts instead of Speedos? #Equality #misogyny

Lio revealed that, beginning in 2006, Norwegian Handball Federation began petitioning to allow women to wear shorts in beach handball. In November, the federation plans to submit a motion to change the rules in an extraordinary congress of the IHF.

In a statement, EHF President Michael Wiederer claimed that the EHF “will do all it can to ensure that a change of athlete uniform regulations can be implemented.”

He asserts that EHF was only following the guidelines put forward by the IHF. However, he failed to say if the fines would be retracted.

The American singer Pink tweeted her support of the Norwegian team on July 24, writing, “The European handball federation SHOULD BE FINED FOR SEXISM. Good on ya, ladies. I’ll be happy to pay your fines for you.”

I’m VERY proud of the Norwegian female beach handball team FOR PROTESTING THE VERY SEXIST RULES ABOUT THEIR “uniform”. The European handball federation SHOULD BE FINED FOR SEXISM. Good on ya, ladies. I’ll be happy to pay your fines for you. Keep it up.

“The concept of ‘modesty’ is experiencing a bit of a golden moment at the Olympics” going on in Tokyo right now, Bethany Mandel wrote at Deseret News on July 27, noting that “This week the German gymnastics team wore a full-body unitard that has traditionally only been donned by women competing from more religious or conservative countries.”

“These young ladies’ push for more uniform control cuts to the heart of why they’re opting for more modest choices: They want to control how sexualized their bodies are by those who are profiting off of them,” she continued. “Gymnasts are some of the most skilled athletes competing in the Olympics, but more than any other discipline, we have recently learned the high price for the sexualization baked into a sport where young women with bodies that still appear prepubescent are running and jumping in what amounts to little more than underwear.”