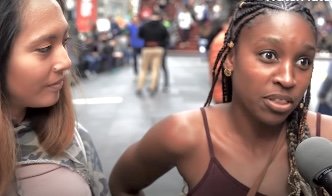 A woman interviewed by Live Action expresses her views on abortion before watching a video of the dismemberment actually being done. YouTube

(LifeSiteNews) — A powerful video showing how second trimester abortions are performed has been used by pro-life organization Live Action to show pro-choice Americans what abortion really is — and the video changed their minds.

The video is part of Live Action’s new 2,363 campaign launched last Saturday. It features Dr. Anthony Levatino, a former abortion physician, as he describes an animated re-creation of a second-trimester abortion that was shown to anonymous pro-choice Americans on the street after a Live Action reporter interviewed people in various cities and asked them about their views on abortion.

At the beginning of the survey, all of the people featured considered abortion to be a “woman’s right to choose.” But after being shown the four-minute video that illustrates the procedure, every single one of them said they changed their mind.

The new Live Action campaign is called 2,363 in reference to the number of abortions that take place in the United States on a daily basis. As explained on Live Action’s website, the aim of the campaign is to “to educate the nation on the humanity of preborn children while emphasizing the imperative to protect these children in the womb.”

Two women in New York said they were pro-abortion, arguing that “women should have the right to choose what they do with their bodies.”

A man in Miami said that “people should have a choice if they’re not ready.”

In Seattle, a woman answered positively when asked whether she supported abortion all the way up to the moment of birth, and a man in the same city said he had “nothing against it,” and that “it’s a right, and a choice [that] people can exercise.”

“I personally wouldn’t do it, but I wouldn’t restrict anyone,” another woman in Chicago said.

The people interviewed were then showed the video of a second trimester surgical abortion procedure called Dilation & Evacuation (D&E), which is performed between weeks 13 and 24 of a pregnancy.

The video was created in 2016 with the help of Dr. Levatino as part of the launch of a new website called AbortionProcedures.com. Levatino performed more than 1,200 abortions before a life-changing experience led him to join the pro-life movement. He has spoken many times about the different types of abortion procedures, including at least one occasion before a house judiciary committee.

The procedure showed in the animation involves the dismembering of a living fetus in the mother’s womb with a surgical tool called a sopher clamp, “a grasping instrument,” that “when it gets a hold of something does not let go,” as Levatino explains in the video.

The abortionist uses the clamp to grasp a baby’s arm or leg, and after getting a firm grip, pulls hard, in order to tear the limb from the baby’s body.

“One by one, the limbs are removed along with the intestines, the spine and heart and lung,” says Levatino, who then explains that the most difficult part of the procedure is the extraction of the baby’s head, which after 13 weeks is usually too large to be pulled out like the other body parts.

The abortionist has to use the sopher clamp to crush the baby’s skull before retrieving the pieces.

“The abortionist knows he has crushed the skull when a white substance comes out of the cervix. This was the baby’s brain.”

He then has to collect the baby parts and reassemble them to make sure that all the parts have been successfully extracted from the mother’s womb and that no pieces are left.

The video concludes with Levatino listing the various complications that women who undergo this procedure expose themselves to, including, uterine perforation, cervical laceration, infection, hemorrhage, maternal death, and complications for future pregnancies.

After seeing the video, the people interviewed described what they saw as “disturbing” and “barbaric.”

“It’s like taking a life and just throwing it the trash. That’s too much for me. I have children,” the man in Seattle said.

“I don’t think any kid, any baby or any fetus should go through that,” the woman in New York said.

All appeared to have changed their mind on abortion after seeing the video, as the woman in Seattle said.

“The video that you guys showed me has changed my mind.”