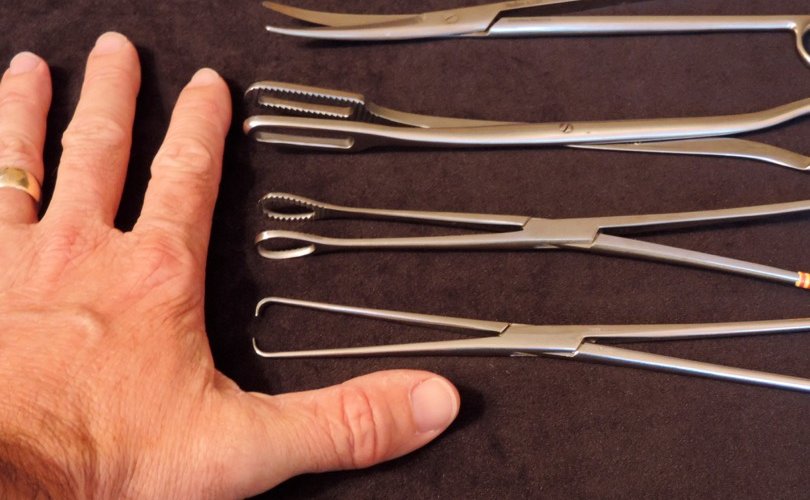 PENSACOLA, Florida, July 19, 2016 (LifeSiteNews) — It was Sunday afternoon. The 33-year-old doctor had finished attending a church service and decided to visit the woman’s health clinic he and a partner had just purchased. The doctor knew the time had finally come for him to enter the room on the second story where thousands of tragic procedures had taken place over the years. He did not want to go into that dreaded room, but he knew that he must quickly come to a decision regarding what was to be done with its equipment.

The doctor used his new set of keys to enter the building, which was closed for business over the weekend, and made his way to the blue-carpeted stairs that led up to the procedure room.

“I immediately could not help but think of the thousands of moms who’d walked up that same set of stairs with a baby on the inside, spent an hour or so up there, and then came down another set of stairs without their baby inside them anymore,” Dr. William Lile said in an interview with LifeSiteNews.

As Dr. Lile reached the second story, he felt a palpable coldness.

“You could just feel that it was a bad place. It felt like I was visiting a concentration camp. It was sullen. It was morose,” he recounted.

On one side of the floor were the row of chairs where women would wait their turn. On the other side was the procedure room itself. With a sense of foreboding, the doctor pushed through the door and entered the room.

Dr. Lile will never forget what he saw in the room. An operating table with stirrups was fully prepped to receive the next patient. Surgical instruments — such as curettes and forceps — were all laid out in their sterile packs.

“Even the suction machine was still there, all ready for the next procedure to be done,” the doctor recounted.

It was 1999. Dr. Lile and the Sacred Heart Hospital in Pensacola, Florida, had just purchased the entire woman’s health clinic from Dr. Bo Bagenholm, the largest abortion provider since the 1970s in the tri-county area. Part of the negotiations included that the abortionist sign a restrictive covenant preventing him from practicing medicine in the county for 24 months. It was a clever and deliberate strategy on the part of Dr. Lile, a devout Christian who valued each and every life, to put the abortionist out of business, and it worked.

“We essentially purchased his practice, the building, the equipment, and the staff. But then once we took over, we could set the rules. My primary emphasis was, ‘Heck, if we go in there and we can get a non-compete, we can stop all of the abortions that he is providing,’” he said.

“We stopped all abortion services and referrals on day one,” he added.

The doctor was profoundly affected as he stood there for some time, gazing upon the shiny instruments of death laid out and ready for the next abortion. He felt himself recoiling in horror thinking about the destruction these tools had inflicted on countless mothers and their preborn babies.

He wondered what he should do with all this equipment that had worked so much evil. He wondered if other people would have the same reaction he experienced if he showed them the instruments.

“I looked at the instruments and said to myself, ‘There are very few people who know what goes on up here,’ he said.

Even though the abortion tools had once served an evil purpose, he would now use them for a good purpose.

It was then that an idea began to form in Dr. Lile’s head. He would show people the equipment with the hope that it might help to change their hearts and minds about abortion. Even though the tools had once served an evil purpose, he would now use them for a good purpose.

“It was then that I dedicated my career to the defense of the unborn,” he said.

Dr. Lile’s first demonstration weeks later was well received. He used the tools, including the suction machine, to show how first and second trimester abortions were performed. He also showed how a partial birth abortion was performed in the last trimester using a doll as a model.

The doctor holds that demonstrating the reality of abortion while using the actual tools of the trade on models allows people to see the horror without being traumatized by seeing blood or body parts.

Now, 17 years later, Dr. Lile has traveled across the United States giving bloodless demonstrations of abortion using the very same tools that once ended lives. He views this work as a ministry in the service of God.

He has teamed up with pro-life and family groups such as Focus on the Family to expand the reach of his message, and he has become a medical adviser for pro-life groups such as Priests for Life and Heartbeat International. Despite his full-time work in obstetrics and gynecology, the 50-year-old doctor still manages to perform up to 12 demonstrations a year in parishes, schools, and conferences. Videos of his demonstrations have been viewed millions of times on YouTube.

As a Christian, Dr. Lile believes that when people choose to do evil, God is powerful enough to bring good out of that evil. Even the tools that were once used by an abortionist to kill countless preborn babies can be turned from their original purpose to teach people to love, respect, and choose life.

Everybody, with their talents, abilities, and possessions is constantly given the choice to do good or to do evil, said Dr. Lile, adding: The choice is up to them.