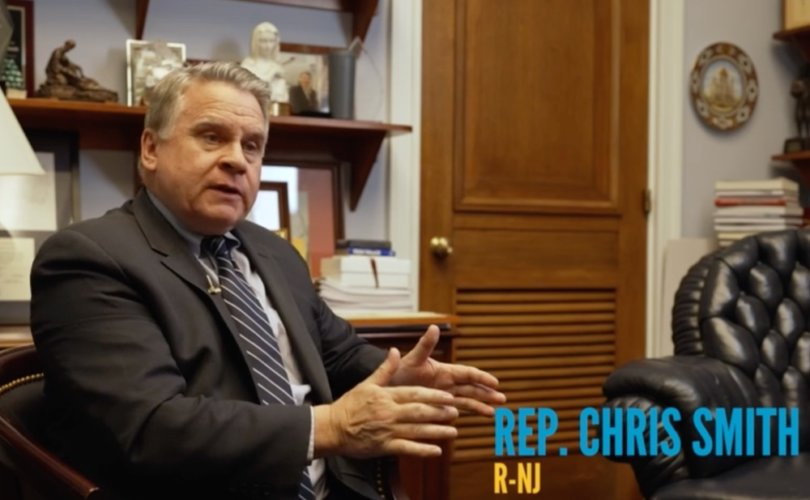 Rep. Smith, a staunchly pro-life Catholic who has chaired 75 congressional hearings on human rights abuses in Communist-controlled China, told LifeSite’s Jim Hale during an interview on Tuesday that it’s “unconscionable” that the United States would participate in the Olympic games while “a genocide is occurring simultaneously.”

Although the Biden administration has implemented a largely symbolic “diplomatic boycott” against this year’s Winter Olympics, which kicked off February 4, it has nonetheless permitted American athletes to participate in the games.

“This is the 1936 Berlin Games all over again,” Smith said, referring to the Olympic games held in Germany just before the outbreak of World War II. “Instead of the Nazis, it is the Chinese Communist Party.”

Smith said that in 2014 when China was given the opportunity to host the 2022 Olympics, Chinese dictator Xi Jinping had already been “planning the genocide against the Uyghurs,” a Muslim minority group that has been subjected to abuse, torture, and genocide at the hands of the Chinese government.

“We have documents that clearly show, [Xi Jinping] said: ‘show no mercy, destroy them.’ And he’s committing classical genocide,” Rep. Smith said. “It meets the definition of the UN Convention on Genocide, including forced abortion to get rid of children.”

Smith pointed out that China’s brutality extends not only to the Uyghur Muslims, but “the Hong Kongers and every faith, including Christians” since “everything has to comport with Xi Jinping’s ideology.”

According to Smith, the Beijing Winter Olympics have already been “chaotic.”

The congressman mentioned the Dutch reporter who was abruptly dragged away by Chinese police during a live broadcast last week, and blasted the Chinese government for the “terrible charade” of having a Uyghur Muslim skier take on the role of the Olympic torchbearer in an apparent bid to convince the world that Uyghurs are not oppressed by the CCP.

“[T]his Olympics is the Genocide Olympics,” Smith argued, adding that he asked the Biden administration last March to change the venue for the games but his request was ignored.

According to Smith, President Joe Biden is complicit with China in more ways than permitting U.S. athletes to compete in the Beijing Olympics.

The congressman mentioned that Biden, while chairman of the Foreign Relations Committee in 2011, failed to denounce China’s one-child policy.

The then-vice president drew backlash from Republicans and pro-lifers at the time when he said “I fully understand” and “I’m not second-guessing” the brutal CCP policy which has coerced women into killing their unborn children.

“How dare you enable such a repression of women, the worst crimes against women imaginable and of course, their babies who are being slaughtered by the government?” the congressman said.

Smith also pointed out that Biden, along with his scandal-ridden son Hunter, is “making significant money through China,” an allegation which investigative journalist Peter Schweizer expounded upon in his best-selling book Red-Handed: How American Elites Get Rich Helping China Win, which was released this year.

According to Schweizer, the Bidens have made “five deals in China totaling some $31 million arranged by individuals with direct ties to Chinese intelligence — some reaching the very top of China’s spy agency.”

In addition to decrying Biden’s alleged dealings with the Chinese government and refusal to take a hard line against its many human rights abuses, Rep. Smith slammed the U.S. government for telling American athletes not to criticize the CCP.

Last week, Speaker of the House Nancy Pelosi drew controversy when she told American Olympians to refrain from talking about China’s torture, brutality, and genocide to avoid “incurring the anger of the Chinese government.”

“I would say to our athletes — you are there to compete,” Pelosi said during testimony before the Congressional-Executive Commission on China. “Do not risk incurring the anger of the Chinese government, because they are ruthless. I know there is a temptation on the part of some to speak out while they are there, I respect that. But, I also worry about what the Chinese government might do to their reputations, to their families.”

Nancy Pelosi tells U.S. Olympic athletes not to “speak out” against the Chinese Communist Party in Beijing lest they risk “incurring the anger” of the Chinese government. pic.twitter.com/kzwSYdMJyM

Pelosi was met with immediate backlash for the remarks, with many arguing that the U.S. never should have involved itself with the Chinese-hosted games.

“This is despicable,” said Republican Rep. Michelle Steel of California. “We cannot allow the #CCP to walk all over us. It is unacceptable that we’ve put our athletes in this position.”

“Pelosi instructs US athletes to keep their mouths shut about human rights abuses in China and not incur their anger,” wrote journalist Ian Miles Cheong. “You will do as you’re told and listen to your masters. She even says the Chinese government will come after your families in America. Ahahaha that’s wild.”

Meanwhile, Rep. Smith told LifeSite that contrary to the advice of Nancy Pelosi, he thinks American athletes should be brave enough to speak out against China, opining that “the worst I think they’ll do is deport them.”

Pivoting from the 2022 Olympics, Smith also ripped American-based corporations that do business with China, facilitating the brutal regime’s growth out of a desire to make money.

Naming Amazon, AT&T, Netflix, and the National Basketball Association (NBA) as major corporations which have turned a blind eye to China’s abuses, Smith argued that “we need to hold our corporations to account and they need to hold themselves [to] account.”

The New Jersey congressman condemned big-dollar corporations like Amazon and Netflix which have come out against election integrity laws in the U.S. while “aiding and abetting Xi Jinping, the dictator in China with not just his propaganda message, but all the hard currency and all the other money that they will glean from this.”

“I’m not against people making money, but just make sure people aren’t being repressed in the process and abused and harassed,” he said.