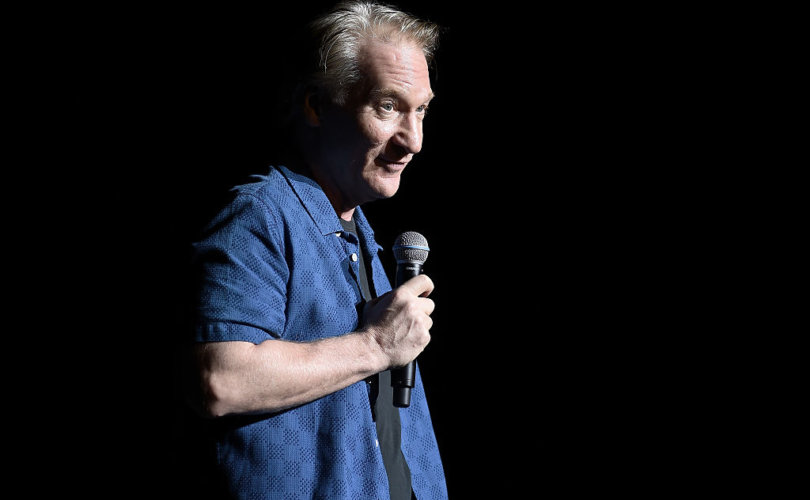 LOS ANGELES (LifeSiteNews) — Liberal comedian and talk show host Bill Maher said the ongoing COVID measures in place throughout the U.S. should no longer be “the dominant issue.” He also scorched the approach of the “medical establishment”: “[T]hey don’t know a lot about anything.”

In an interview with Hollywood entertainment blog Deadline, the Real Time with Bill Maher host said that at no point over the last two years has he felt threatened by the novel coronavirus, stating, “I’m over COVID.”

“I was never scared of it,” the talk show host said, explaining that instead he “was always scared of the reaction to it, and as this has played out that only proved to be more true for me.”

“I’m sure many people feel different, but that’s me. It was never that virulent a threat, I thought, to people who were in good health,” the comedian added.

Rather than taking the blanket approach of tackling the spread of the virus employed by the government, Maher suggested that the most vulnerable ought to have been the focus of protection since “it was mostly a disease of the very old, which every disease is a threat to, and people who have comorbidities, which mostly is due to lifestyle.”

Expanding, Maher related data from the U.S. Centers for Disease Control and Prevention (CDC) which stated that in a March study of almost 150,000 people hospitalized with COVID-19, “28.3% had overweight and 50.8% had obesity.”

“I’m just saying that is a lifestyle … the fact that America, the medical establishment, never even attempted to get people to live a healthier lifestyle as a response to this pandemic is a giant scandal to me,” he added. “It’s not a rarefied or weird point of view to say that if people would up their vitamin D levels, up their zinc levels, stop eating sugar, get a proper amount of sleep, stop overeating and day drinking, which is what went on during this pandemic, they would have a much better chance [of recovering].”

Maher later lambasted medical professionals, including White House COVID-19 czar Dr. Anthony Fauci, for insisting that people “just do what we say,” especially given that there is “plenty of corruption in the medical establishment.”

“They don’t know a lot about anything,” he blasted.

Although “[w]e’re not putting wooden teeth in our mouth like in the George Washington era, and of course we have antibiotics and lots of vaccines and lots of other things that have been miraculous … in general, we still don’t understand too much about how the human body works,” he said. “So, don’t sit there in your white coat and tell me, ‘Just do what we say. When have we ever been wrong?’ A lot, is my answer. A lot.”

Criticizing the effectiveness of the abortion-tainted COVID jabs against the virus, Maher said that they “do not prevent you from either transmitting it or getting the disease. We know that. That’s a fact now.”

Asked if he thought the booster is “useless” against the virus, Maher said it is “not only useless, but this is a very, very new vaccine,” later admitting that he did not wish to receive the shot in the first place.

“I didn’t want the first vaccine,” he said, “but okay, I took one for the team. Now, they’re giving a fourth one in Israel with the booster shots. Now, this I read in the front page of the New York Times, which is a very pro-vaccine publication, and even they printed that many scientists in Israel were against this, scientists and doctors, because they said it might have a reverse effect, something called immune system fatigue.”

“Well, I don’t want that, do you? So, now you’re not protected by the vaccine or your immune system? I don’t think so,” Maher commented.

Maher contracted the virus in May last year, despite having received two shots of the anti-COVID jabs.

An Israeli researcher at the prestigious Sheba Medical Center has said earlier this month that preliminary data from a recent study show the current COVID shots to be “not good enough” against the predominant yet usually benign omicron variant.

Consequently, Maher added that “[w]e should not treat people unfairly who want to allow their own immune system to take care of the situation.”

“I feel like COVID is still the dominant issue of our lives right now and it should not be anymore,” he said.

In the first show of the new season of Real Time with Bill Maher, former New York Times opinion editor Bari Weiss echoed Maher’s sentiments, telling viewers that “it’s ridiculous” that COVID measures have not yet been lifted and that the crisis is “a pandemic of bureaucracy, it’s not real anymore.”