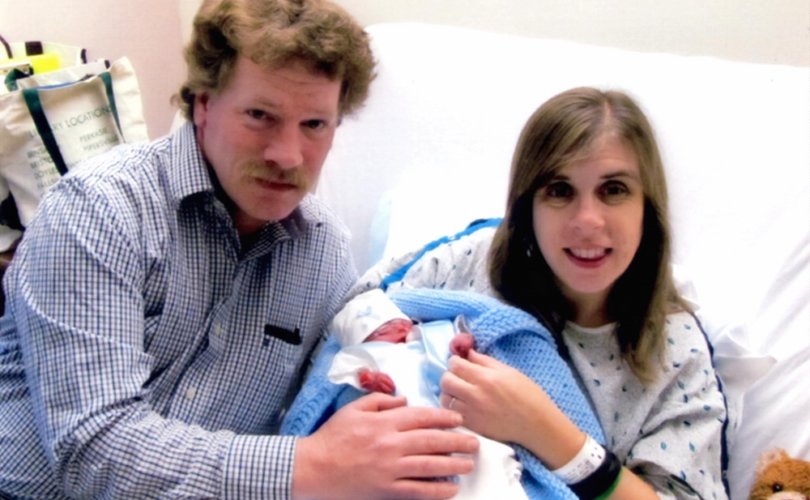 Editor's note: Today is St. Valentine's Day. LifeSiteNews is pleased to bring you the true story of one mom’s amazing love for her sick baby whom doctors said could be aborted. It is this kind of love that will one day save the world.

BUCKS COUNTY, Pennsylvania, February 14, 2017 (LifeSiteNews) — Is there any real difference between a mother who terminates her pregnancy because the baby has practically no chance of survival and a mother who decides to keep such a pregnancy but whose baby dies just before he’s born? Since in both situations the baby dies before birth, is there any difference?

For Deb Melson, the answer is a solid “Yes.” Even though her baby died in the womb, she’s so glad she refused the doctor’s suggestion to terminate.

“I would not change a single thing about my journey, as it was so beautiful,” she told LifeSiteNews in an exclusive interview.

This is Deb’s story.

It was last August when 42-year-old Deb became worried about feeling “icky” for so many days in a row. The mother of three had recently become busy in life. She was running cross-country with the ambulance squad. She was taking karate lessons. And she had just accepted an offer to work part time in the dental lab of a dear friend.

“Life was busy, but life was good,” she said.

Deb told her doctor that she must be having more stomach problems due to her gluten intolerance. But after some tests, the doctor diagnosed something entirely different.

“It turns out that I was pregnant. And I didn't really know about it because I was just way too busy,” she said.

“Here, I was thinking I was having stomach issues when I was actually pregnant. I just cried the whole appointment, because I wasn't expecting that,” she added.

An ultrasound revealed that Deb was about 17 weeks pregnant. While she was glad to see her “little one” on the machine’s screen, the sonographer did not appear to share her joy.

“The sonographer was taking a long time to get all of the baby’s measurements. I was then asked to stay for an appointment in the afternoon so that the doctors could talk to me,” she said.

The news wasn’t good. Deb was told her baby had “complications.” His stomach was too small. He had heart defects. He had fluid in his brain. Doctors suspected the baby had Trisomy 18, a condition where there are three copies of chromosome 18 instead of the normal two.

Deb learned that her baby was considered to be “incompatible with life.” She was told he would not live long, if he even managed to survive birth.

She was given various options, including to terminate her pregnancy.

But deliberately ending the life of her baby just because he had difficulties was not an option Deb was comfortable with.

“I don't really like the idea of killing anything,” she said. “Sometimes when spiders get inside the house, I will put them in a cup, put a cover on the cup, and set them free outside the house.”

“When my doctors brought up termination as an option, I said ‘No’ right away, because it’s not my place to kill,” she added.

Even though Deb knew her baby’s condition was life-threatening, she wasn’t going to allow this to determine the value of her son’s life.

“My attitude was that he was welcome to stay, no matter how bad his condition was, for as long as he was able to,” she said.

When Deb told her husband Tony and their three children about the baby’s condition, she said: “You know, we're just going to ride it out to the end, come what may.”

What came were a lot of unexpected joys.

Deb would be listening to her favorite songs while washing dishes and suddenly feel her baby kicking along in time to the rhythm.

The baby especially kicked when Deb’s pastor would read from the Gospel during Sunday service.

“He was a fun-loving kid,” she said. “He communicated to me with his kicks, letting me know he was there.”

One Saturday in December while doing the dishes, Deb became alarmed when her baby did not kick along with the music. She pulled out her stethoscope to try to pick up his heartbeat, but could not hear anything.

Deb woke up the next morning weeping. She suspected her baby would not be kicking during the Gospel reading that day.

An ultrasound confirmed her fears. Her baby had passed away. Deb allowed the doctors to bring on her labor.

While Deb was sad because of her baby’s passing, she was also captivated by his beauty.

Deb joked that her son should have been given an honorary junior black belt because of the way he held his arms and fists.

“He was in a perfect ‘guarding stance’ with his arms up and his fists clenched,” she said.

Deb said that if she had chosen to terminate the pregnancy, she would have missed out on enjoying Jacob Jeremiah’s presence while he was alive within her.

She wrote Jacob a letter that Christmas, explaining how much he meant to her.

A million hundred thousand gazillion thanks to you. Your presence in my life has blessed me many times over.

I have learned so much from you and it's amazing, because you've graced me with 31 weeks, of which you were playing hide and seek with me for the first 17. You definitely had a playful nature about you and you made all the doctors and sonographers work extra hard to get all your measurements!

I appreciated all the dreams and signposts along the way of your development.

I enjoyed sharing my favorite songs with you.

I was sad when you became silent, even though I understood it was necessary.

I was sad when I saw your flat line on the ultrasound machine, even though that was also necessary.

I am so glad I was given so much time to spend with you.

Thank you for bringing me closer to God.

I am eternally grateful for your presence.

Your Dad, sisters Jessica and Jillian, and brother Jack love you!

I love you forever and for always,

Deb said that when a doctor tells a woman that her baby is “incompatible with life” she should not see this as her baby’s “death sentence,” but as an opportunity to become the “awesome mother” she was created to be.

“When a woman receives bad news about her pregnancy, she has just received a new mission and purpose,” she said. “This woman must now become the one who stands up and protects her baby’s life, no matter how long or short it is. Choosing life will empower her to become the awesome mother she was created to be for her baby, no matter what conditions her baby has. It is she, and not anybody else, who was chosen to be the ‘mom’ for this Little One within. This makes her a ‘diamond in the rough.’”

“By choosing life for her baby, she will receive significant blessings along the way that she could never have imagined. These will be priceless to her and will see her through the difficult times,” she said.

Even though Jacob Jeremiah’s life was cut short by his condition, Deb is grateful for the time they had together. She will cherish it always.

“When anybody asked me how I was dealing with the news of my baby’s condition, I would tell them, ‘This Little Guy Within will be with us only for a short amount of time, but I’m enjoying every moment of his presence.”

“That's what I told everybody. And Jacob Jeremiah’s time with me was beautiful. We had a beautiful journey together all the way to the end. And I am blessed and honored to have undergone that with him,” she said.