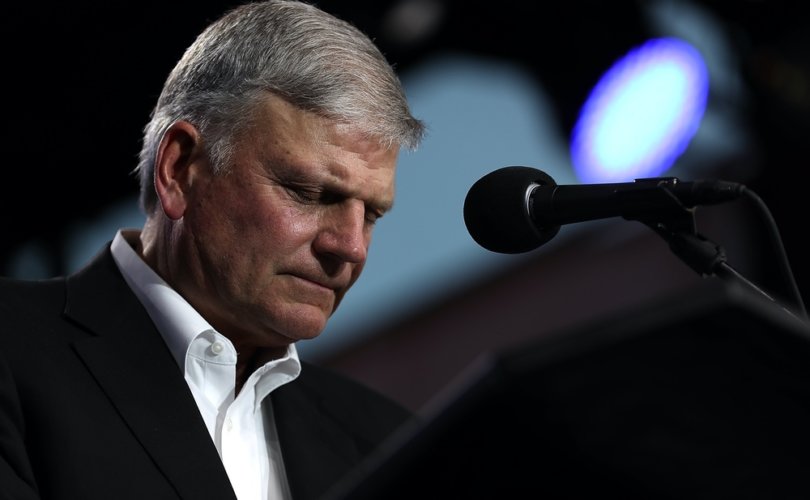 Earlier this week, stadiums in the English cities of Sheffield and Liverpool bowed to pressure from LGBT activists and their “allies” to bar Graham, the son of the world-famous evangelist Billy Graham, from preaching. Now Glasgow’s Scottish Event Campus (SEC) Hydro has done the same.

Pauline Gallagher of Catholic Family Voice told LifeSiteNews that she was “saddened” that the Protestant evangelical had been barred from her city.

“I am saddened beyond words that Billy Graham's son has been banned from speaking in Glasgow,” Gallagher said.

“The dividing line is not between religious and LGBT. It is between reasonable and unreasonable people,” she continued.

“High profile commentators like Douglas Murray and Andrew Doyle in the U.K. and Dave Rubin in the U.S., who are gay, are speaking out for the rights of religious people to express their beliefs.”

The British Broadcasting Corporation (BBC) quoted a spokesperson from SEC Hydro who claimed that the organization had been impartial:

“The booking for this event was processed in the same way we would for any religious concert of this nature and as a business we remain impartial to the individual beliefs of both our clients and visitors.”

“Following a request from our principal shareholder the matter has been considered and a decision made that we should not host this event,” the spokesperson said.

Speaking to the Glasgow Times, the leader of Glasgow’s municipal government indicated that she thought Graham might break so-called hate speech laws.

“The reporting of the ways in which Mr Graham expresses his views makes clear that this is not simply about offence or disagreement,” said Scottish National Party councillor Susan Aiken, 48.

“Neither is it a debate about free speech. How he expresses his views could, I believe, fundamentally breach the council’s statutory equalities duties.”

The Glasgow Times also reported that council bosses [local government officials] had also “expressed fears over the damage done to the city's reputation” by Graham’s appearance.

However, Glasgow’s reputation has already suffered, at the very least in faithful Christian circles, in the wake of the firing of a Catholic priest from his university chaplaincy position, merely for hosting a rosary to be prayed in reparation for sins committed during the city’s 2018 homosexual “pride” jamboree.

Graham has responded to objections to his plans to preach in eight British cities by saying that he is not coming to spread hate:

It is said by some that I am coming to the UK to bring hateful speech to your community. This is just not true. I am coming to share the Gospel, which is the Good News that God loves the people of the UK, and that Jesus Christ came to this earth to save us from our sins.

The rub, I think, comes in whether God defines homosexuality as sin. The answer is yes. But God goes even further than that, to say that we are all sinners — myself included. The Bible says that every human being is guilty of sin and in need of forgiveness and cleansing. The penalty of sin is spiritual death — separation from God for eternity.

That’s why Jesus Christ came. He became sin for us. He didn’t come to condemn the world, He came to save the world by giving His life on the Cross as a sacrifice for our sins. And if we’re willing to accept Him by faith and turn away from our sins, He will forgive us and give us new life — eternal life — in Him.

My message to all people is that they can be forgiven and they can have a right relationship with God. That’s Good News. That is the hope people on every continent around the world are searching for. In the UK as well as in the United States, we have religious freedom and freedom of speech. I’m not coming to the UK to speak against anybody, I’m coming to speak for everybody. The Gospel is inclusive. I’m not coming out of hate, I’m coming out of love.

I invite everyone in the LGBTQ community to come and hear for yourselves the Gospel messages that I will be bringing from God’s Word, the Bible. You are absolutely welcome.

The lack of welcome for Franklin Graham in Glasgow is in dramatic contrast to the one rolled out for his late father Billy Graham in 1955. Billy Graham spent six weeks in Scotland during his historic “All-Scotland Crusade,” reaching over 2.5 million people in stadiums, halls, and even on the streets throughout the country. Approximately 50,000 Scots came forward at his meetings to show that they had newly accepted Christ.

Billy Graham, who remained opposed to same-sex “marriage” all his life, died in 2018. He was awarded an honorary knighthood by Queen Elizabeth II in 2001.