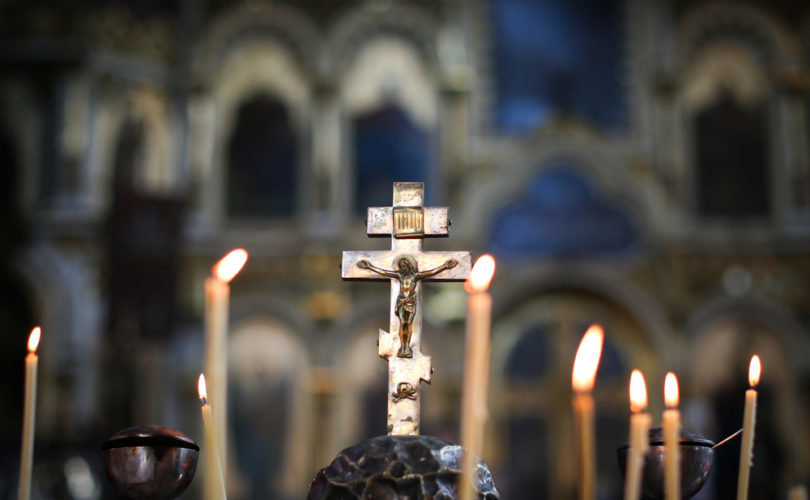 But the doctors plan to resume aborting unborn babies once ‘Christ is risen!’ is sung on Easter.Shutterstock.com

TIMISOARA, Romania, April 10, 2015 (LifeSiteNews.com) – Thirty abortionists in Romania have admitted that their practices “upset God” and have temporarily suspended their livelihood in observance of the Resurrection of Jesus Christ.

Marius Craina, a spokesman for the 30 abortionists, flatly stated, “We do not perform abortions during the major [Christian] holy days, especially during Holy Week and Christmas, because we think it is not right to upset God.”

The group of Romanian abortionists will postpone all abortions until after Holy Week, the seven days beginning on Palm Sunday leading up to Orthodox Easter, or “Pascha.” This year, Orthodox Pascha is April 12.

But the doctors plan to resume aborting unborn babies once “Christ is risen!” is sung on Easter.

Consequently, the only practical effect of the abortionists' temporary cessation is the babies aborted grow bigger and are aborted at a later date. But their belief that abortion upsets God seems to be an admission that the abortionists accept the existence of the Christian God and the universal legitimacy of the Judeo-Christian moral code.

Not only did Craina, an abortionist and gynecologist, acknowledge that what they do for money upsets God, he expressed regret over the 250 abortions taking place in Romania each day.  In this country where most citizens profess Christianity, nearly one-third of pregnant women abort their children in the womb. There were 88,000 abortions recorded in 2012, compared to only 200,000 births.

“Here, abortion is seen as a means of contraception. We have one of the highest abortion rates in Europe,” Craina lamented.

At one time, Romania had a reputation as one of the most pious and faithful Christian nations, until Communism silenced the Orthodox Church in the public square and sought to eradicate Christianity from education.

The Orthodox Church, the nation's overwhelmingly predominant faith, has always taught that abortion is a grave sin and a form of murder. “The Orthodox Church has a definite, formal, and intended attitude toward abortion.  It condemns all procedures purporting to abort the embryo or fetus, whether by surgical or medical means,” according to a statement from the Greek Orthodox Archdiocese of North and South America. “The Orthodox Church brands abortion as murder, that is, the premeditated termination of the life of a human being.  Decisions of…legislatures by which abortion is allowed, with or without restrictions, should be viewed by practicing Christians as an affront to their beliefs in the sanctity of life.”

Christian countries that were taken over by the Soviet Union have the highest abortion rates in the world today, even though they are no longer shackled by official government atheism.  Sociologists conclude that people got used to 70 years of easy, government-sponsored abortion and the atheist propaganda that portrayed “pregnancy termination” as morally acceptable, even convenient.

For a time after Communism fell, Romania outlawed abortion, but the effects of Marxism remained. When abortion was again legalized in 1990, nearly one million abortions were reported – three times the number of births. This number does not include abortions performed in facilities that were not state-run.

Romania is the European Union's second poorest country and, indeed, many women use abortion as a form of birth control.

1
NFL star Aaron Rodgers blasts Joe Biden, slams ‘witch hunt’ against unvaxxed Americans in ESPN interview
2
The revolution will not be televised, at least not on mainstream media
3
COVID vaccines are a spectacular failure, data show
4
COVID vaccines ‘dangerous and ineffective,’ must be ‘withdrawn from the market’: former NYT journalist
5
US gov’t whisteblowers sound alarm over increases in miscarriages, cancer, since COVID shot rollout
Subscribe to Daily Headlines »