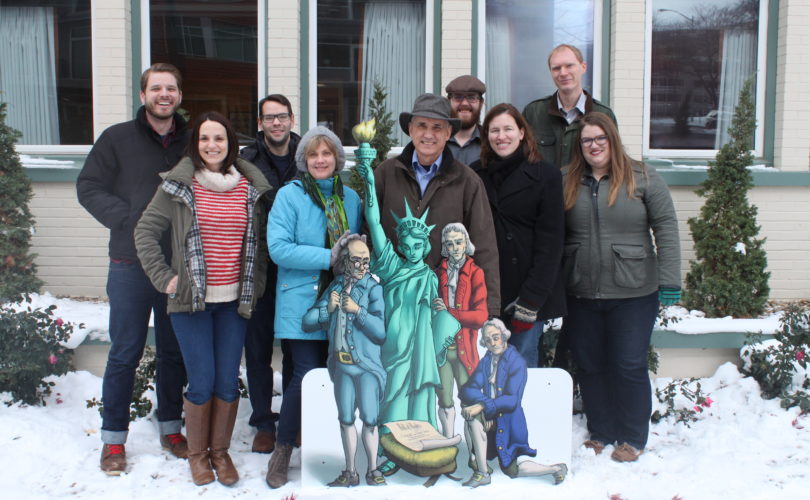 The Freedom From Religion Foundation set up a "nativity scene" in Indiana replacing baby Jesus with the Bill of Rights.FFRF.org

WASHINGTON, DC, December 22, 2015 (LifeSiteNews) – Atheist objections to public Nativity scenes are nothing new, but a leading atheist group has shown a pattern this year of challenging displays of the Christmas message.

Several actions, legal and otherwise, have been initiated across the country this Christmas season by the Freedom From Religion Foundation (FFRF).

A federal judge barred Concord Community Schools in Elkhart, Indiana, December 2 from having a live Nativity scene in its annual Christmas program, a 45-year tradition for the school system, after the FFRF and ACLU sued in October. The performances were scheduled for December 11 and 12, according to CRUX, and the case is due in court January 7.

Elsewhere in Indiana, the FFRF was behind an “atheist nativity” erected in late November at the Franklin County Courthouse.

The display, a “Bill of Rights nativity” containing George Washington, Benjamin Franklin, Thomas Jefferson and the Statue of Liberty with the Bill of Rights in a manger, was to go up next to the traditional Nativity.

Franklin County, Indiana, commissioners drafted an ordinance allowing multiple displays on the courthouse lawn after the FFRF sued last year, according to Breitbart.com, implementing a permit application process resulting in some nine different displays approved this year so far.

FFRF has also obtained a permit to place its “Bill of Rights nativity” at the Texas Capitol, “to balance a Christian Nativity there,” according to its website, with a set-up event that was scheduled for December 18.

Who’s behind these challenges to Christmas displays

The Madison, Wisconsin-based FFRF has been around since the late 1970’s, has chapters in 17 states and claims some 20,000-plus members across the nation.

The group claims on its website that history shows most social and moral progress has been brought about by people “free from religion,” and says it acts as “an umbrella for those who are free from religion and are committed to the cherished principle of separation of state and church.”

Staff Attorney Sam Grover told LifeSiteNews that FFRF receives thousands of complaints about “state/church separation” issues every year, and after determining which situations violate this idea, they write letters on as many of the complaints as time and resources allow. “Typically this is over 1,000 letters per year,” Grover said.

Most of these letters do not turn into lawsuits. “There are many factors that go into our consideration on whether to take a lawsuit,” Grover said, “but the biggest factors are practical ones: we need a local complaint who is affected by the violation and is willing to be involved in a lawsuit, and we need a local attorney to be physically present in court and to file paperwork, etc.”

Many “egregious” violations go unchallenged for lack of one or both of these elements, he said.

In 2012 FFRF took out an anti-Catholic full-page ad in the New York Times which asked Catholics, “Why are you propping up the pillars of a tyrannical and autocratic, woman-hating, sex-perverting, antediluvian Old Boys Club?”

One of FFRF’s efforts to counter public Nativities – a Winter Solstice banner which states: “At this season of the Winter Solstice, LET REASON PREVAIL. There are no gods, no devils, no angels, no heaven or hell. There is only our natural world. Religion is but myth & superstition that hardens hearts & enslaves minds” – has been placed in communities in a number of states as well.

At press time the group was offering a $1,000 reward for information on the theft of one of the signs, also placed at the Franklin County, Indiana, courthouse.

The ban on Elkhart’s Concord Community Schools’ decades-long tradition of a live Nativity was censorship by a federal judge, acting on the complaint of two anti-Christian organizations (FFRF and the ACLU), Catholic League President Bill Donohue said.

“And they, in turn, responded to the beckoned call of a bigot,” Donohue said in a statement. “The judge's decision, like those who made the complaints, flies in the face of directives announced 20 years ago on the subject of religious expression in the schools.”

Tom Brejcha: “Atheist groups may mock our message, but we will not be silent as it is critical that Christians proclaim the Gospel message to their fellow citizens.”

“Those directives, while prohibiting teachers and administrators from soliciting or encouraging religious activity in the schools, also prohibit them from ‘discouraging activity because of its religious content, and from soliciting or encouraging anti-religious activity,’” Hinshaw told LifeSiteNews. “Thus, the principle of neutrality would prohibit school authorities from interfering with students including a live nativity display as part of their annual Christmas show.”

But it isn’t just in schools where the federal government has decreed that religious expressions are to be allowed unfettered.

“Similarly with Nativity displays in public spaces such as parks,” Hinshaw said, “the courts have ruled that where such public facilities can be used as a ‘public forum,’ open to various displays by citizens or groups, they must allow religious displays. This is why the Catholic League is permitted to place a nativity scene in New York City's Central Park every year.”

The Thomas More Society provides legal counsel for the American Nativity Scene Committee (ANSC) and local private groups around the U.S., working to ensure the right to display Nativity scenes in State Capitols and in other public venues that qualify as traditional and designated public forums. The two groups have sponsored Nativity scenes in several states and are working to secure permits in others.

The Thomas More Society prevailed in court over the FFRF and ACLU last year in the Franklin County, Indiana, courthouse case, and spokesman Thomas Ciesielka told LifeSiteNews the Society is involved in legal actions this year, but could not share specific details.

“Atheist groups may mock our message, but we will not be silent as it is critical that Christians proclaim the Gospel message to their fellow citizens,” stated Thomas More Society President and Chief Counsel Tom Brejcha.

Anti-Christian and anti-Christmas rhetoric are a stark contrast with the positive, uplifting message of Christmas, he said, which has secular, as well as religious significance.

“That message of the essential equality and dignity of all human beings, no matter how rich or poor, humble or high-stationed,” said Brejcha, “resonates deeply with the values that Americans cherish.”

Hinshaw concurred that freedom of religious expression in the public square is a Constitutional right, and the supposed separation of Church and state does mean suppression of religion.

“The Freedom From Religion Foundation's very name advertises its opposition to Constitutional principles,” he told LifeSiteNews. “The First Amendment guarantees Freedom of Religion, not Freedom from Religion. While government may not engage in the establishment of a particular religion, it is not required to be—in fact it is prohibited from being—hostile to religion, including to religious expression in the public square.”

Some communities have responded effectively to the FFRF assault on Christmas Nativities without legal action.

More than 500 people came out December 19 of last year for a demonstration to support a Nativity scene light display in front of City Hall in Rainbow City, Alabama, according to al.com.

FFRF wrote the city last December stating its Nativity scene presented “an inherently Christian message on government property.” The city took it down, but then put it back up a day later, and the 500-person-strong demonstration in support of the city took place shortly thereafter.

The same Nativity scene is now displayed across the street from City Hall on private property, the Alabama website said, with a live nativity planned for tomorrow, Dec. 23 in the City Hall at 6:00 p.m.

FFRF has asked through an attorney for records pertaining to the live Nativity, but Republican State Representative Mack Butler of Rainbow City, who is involved as a private citizen, said the event is not in any way sponsored by government.

He also said this year’s event could draw four times the number of people that last year's demonstration brought, with organizers offering overflow parking, valet parking, and shuttle service to the live Nativity.

After the FFRF threatened suit against the City of Wadena, Minnesota, this year to prohibit Nativity scenes from City property following the City’s Nativity scene displayed in a city park for four decades, the City Council gave the statues of Mary, Joseph and the baby Jesus to a group of local ministers.

Following that and countless angry calls to City Hall, according to the Winona Daily News, Nativity displays began to show up in local merchant’s windows, in front yards and other places in town, with an estimated one thousand Nativity scenes throughout Wadena.

“The whole community has come out to support this,” said Gillette Kempf, owner of An Open Book store, who is also a City Council member. “It's an expression of who we are as a community and what we believe. We believe in the Nativity.”

FFRF’s complaint against Belin, New Mexico, for its long-time Nativity display in a park across from its City Hall succeeded in spreading the Christmas message as well.

The community of Belen, which is Spanish for Bethlehem, has hosted a Follow the Start event for the last two years, but this year the event was much larger, in response to the FFRF legal threat.

Not only was the Nativity scene live, the town of Bethlehem was reenacted as well, with a petting zoo, orchestra, choir and crafts for kids, a report from krqe.com said, and with more than $50,000 in donations for the event.

Check this out! After an atheist group forced one Minnesota city to take down its nativity scene, residents took matters into their own hands!

Held December 5, Follow the Star drew hundreds of people to the parking lot of City Hall, rented by volunteers, removing any possibility of violation of the separation of Church and state.

“One of the things about this organization that I don't think that they fully understand is when they send a letter like that, all they're doing is riling people up and getting them to express support more than they ever have before for things like this,” Belen Mayor Jerah Cordova said, according to ABC affiliate koat.com.

“People are concerned about their freedom of religion and so in response we're trying to stand up and say we're not going to go in a corner and hide any more, we're going to stand up and proclaim what we believe,” said Calvary Chapel Rio Grande Valley senior pastor Ray Jaramillo, one of 12 local pastors to help organize the event. “[The FFRF's goal] backfired and I think riled up the Christian community to come out and support our religious freedom.”