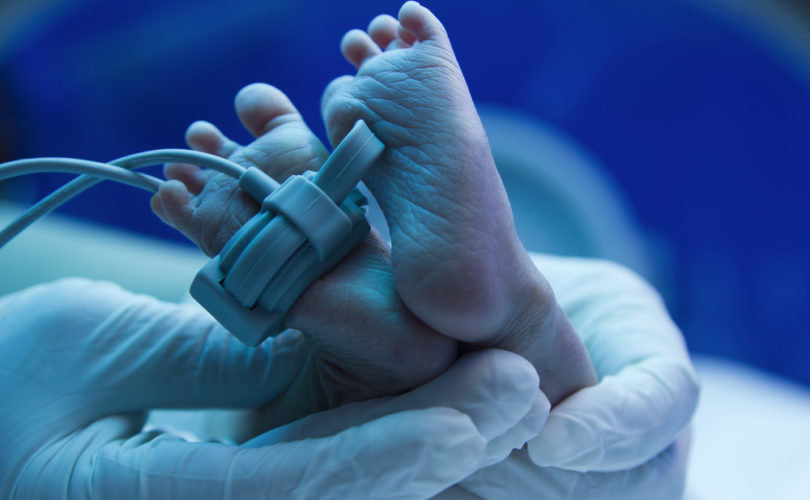 But at three weeks old, Harrison had a sleepless night, and the next day, he became unresponsive.

His mother knew something was wrong. She called England's equivalent to 911, and an ambulance took Harrison to Rotherham Hospital. “They didn't even know if he'd make the journey, it was touch and go,” Samantha later told the Daily Mail.

Doctors performed a spinal tap and examined Harrison's cerebrospinal fluid. They concluded that Harrison had come down with meningitis, a deadly infection.

Harrison was given strong antibiotics for five long, difficult days, but his condition only worsened. Finally, “[d]octors confirmed our worst fears,” Samantha shared. “He was going to die.”

Having done all they could, Samantha and Adam took their baby to a hospice to die. Harrison remained on a breathing machine, so his parents could have time to say goodbye. After Samantha and Adam tearfully bade farewell, doctors pulled the plug on the ventilator.

But Harrison continued breathing on his own.

“When Harrison's life support was switched off we never imagined he would continue to breathe,” Samantha later explained. “It felt like a real miracle.”

Harrison not only lived, but got better. In fact, his progression amazed his physicians. Nevertheless, doctors told his parents that Harrison's lack of brain activity meant he would never walk, never talk, and never feed himself.

Samantha and Adam were just glad their baby was alive. “We were terrified, but so thankful he had survived, that we just took each day as it came,” Samantha said.

Each day did come, and Harrison grew stronger and healthier. He did learn to walk and talk and feed himself. Now a happy, playful toddler of three, Harrison's parents call him their “miracle baby.”

“We still can't believe it ourselves when we see him walking and talking,” his mother said. “Looking at him now and watching him running around, riding his bike and reading books, it's amazing.”

“Harrison is full of life, and we can't believe how lucky we are to have him.”

Harrison starts preschool next year. He has some deafness in one ear and has mild cerebral palsy on his right side, “but you would never know by looking at him,” Samantha, now pregnant with a girl, said.

According to the National Meningitis Association, nearly 1,000 people contract meningitis in the U.S. each year. Of those, 10 to 15 percent die. Among those who survive, 20 percent live with permanent disabilities. Meningitis vaccines offer excellent protection.

“Meningitis takes hold so fast, I would warn all other parents to take their child straight to the hospital if they suspect something is wrong,” Samantha told the Daily Mail. “'Harrison went floppy and lost his appetite but he didn't ever develop a rash which a lot of people assume is the first symptom.”

Other signs seen in babies include a bulging soft spot on the head, refusal to feed, irritability when picked up, and stiff body with jerky movements, or else floppiness and lifelessness.

Samantha and Adam now fundraise for Bluebell Wood Children's Hospice, in appreciation for the care they received. Julie Devine, director of care at Bluebell, said the hospice is grateful for their fundraising, “which helps us to continue providing support for more than 200 children and families a year.”

Baby Madalyn’s life showed the humanity of the preborn