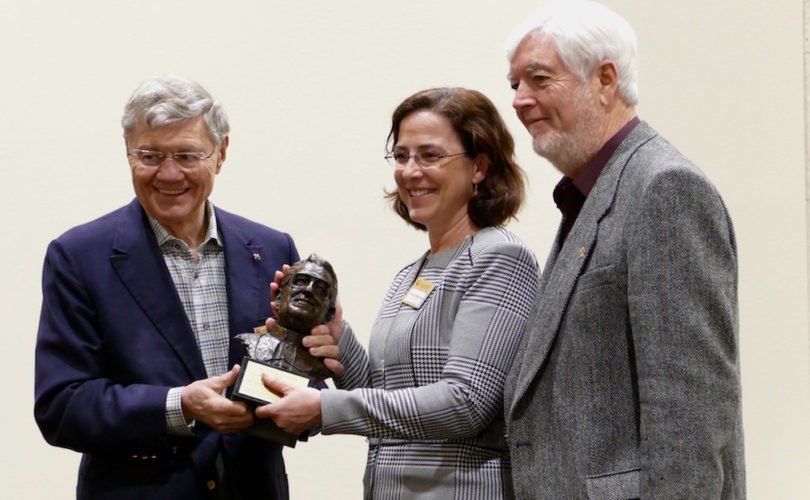 So she was told by two aunts who were deeply committed to Planned Parenthood. When as a recent graduate from high school working in a Seattle hospital she saw her first aborted baby, she said, “To my eyes then, it was not a baby; it was a disgusting space alien like they said. I thought the Church had lied.”

Now, as the founder of AVM Biotechnology, a firm dedicated to making adult stem cell treatments viable in the hospital and the marketplace, Deisher believes that the Catholic Church is right not only on morality but on science. “Science is on the Church’s side,” she said.

This is nowhere more evident than in the contentious debate over embryonic stem cells, which though backed by Hollywood and President Barack Obama, have never provided a practical treatment for any disease, because their uncontrollable nature gives rise to cancerous tumors. On the other hand adult stem cells, which are usually taken in the first place from the person being treated, are far less problematic.

They do present challenges however, and AVM Biotech is addressing one of these with a development that she hoped, in an interview with LifeSiteNews’ John-Henry Westen, “to be earning revenues within three years.” The problem is that most adult stem cells injected into a patient to treat a failing organ dissipate to elsewhere in the body, with only 10 percent reaching their target. AVM Biotech’s goal, she told Westen, is to develop “stem cell-enabling drugs so that stem cells can reach their optimal potential.”

Deisher was already a biotech wunderkind before starting AVM (for Ave Maria) Biotech in 2008. Her name was on 23 patents from 17 years with a chain of leading firms such as Genentech, Repligen, ZymoGenetics, Amgen and Immunex.

But when she moved to a Seattle start-up named CellCyte that foundered after its CEO made overblown claims, she did some soul-searching about her future. She had already returned to the Catholic Church after realizing that the unborn were indeed human beings, and after parenting taught her the wisdom behind all the Church’s rules—and after praying daily in a chapel. She says, “I heard a voice within me saying, ‘Start a pro-life company.’”

“It’s not enough to say no to embryonic or aborted stem cells,” she explained to LifeSiteNews. “What we need to do is provide better alternatives. And better alternatives are moral alternatives. We can not only use those stem cells in good conscience but they work better. They are safer, they are more effective and our technologies make sure that they reach their target organs in diseased patients.”

Deisher says human clinical trials are imminent for her firm’s stem cell-assisting product, and investors are being sought.  But they have to be ones in line with AVM Biotech’s pro-life values. “That’s to make sure we don’t develop a technology for adult stem cells that could ever be turned and be used for embryonic or aborted stem cells,” she told Westen. “We want to walk our talk.”

Deisher added that she believed in responding to “criticism with love,” though she had received death threats. But “when people are given moral options I think they’ll tend to take them. No one really wants to use aborted fetal cells.”