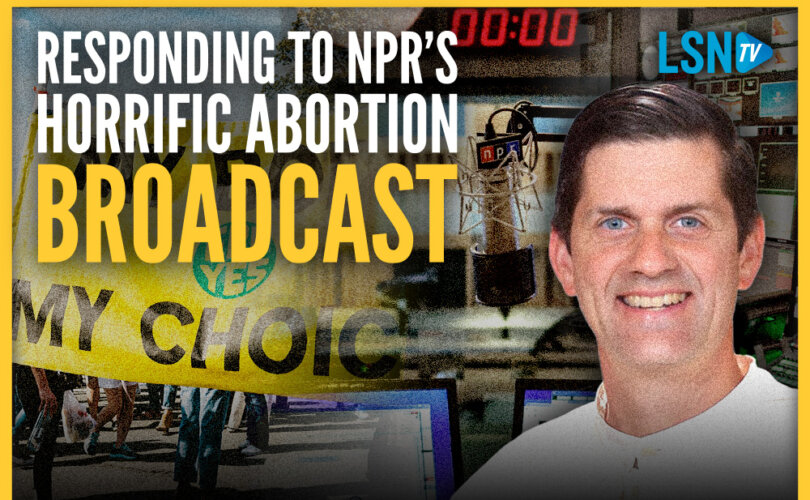 (LifeSiteNews) — In an exclusive interview with LifesiteNews, Fr. Alan Benander, O.Praem., a Norbertine Canon and member of Priests for Life, explained the inspiration for the Day of Mourning, in which Christians and pro-lifers are being asked to offer prayers, fasting, and penance in reparation for the public dishonor done to an unborn child, named by Priests for Life Amanda Marie, by NPR’s airing of the audio recording of the murder of the baby through abortion.

Describing his own hearing of what NPR aired, Fr. Alan said, “I couldn’t even finish listening to it… I hit my knees and just started to cry over this little one who was murdered, knowing that I’m hearing the death of a baby, the murder of a child in the womb… I went to the Blessed Sacrament, bowed down before the Blessed Sacrament there, and said, ‘This is disgraceful, Lord. I just heard the death of one of your little ones.’ And I was inspired—first I was consoled with the idea, the confidence that Our Lord was taking care of that child—and was given an inspiration in that time of prayer in front of the Blessed Sacrament to do something for that child, to honor that child.”

READ: ‘A recording of a murder’: NPR plays audio of an abortion on air

“The name Amanda Marie came to mind immediately. Amanda means ‘she who ought to be loved’.”

Fr. Alan continued, “We need to rally pro-lifers throughout the country. This cannot go without a response. We need to defend this child, to defend this particular child… who was murdered and publicly disgraced.”

Fr. Alan went to Fr. Frank Pavone with Priests for Life and the two decided to launch a national Day of Mourning on Dec. 3, the one month anniversary of Amanda Marie’s death. They issued a statement condemning the murder of the baby and NPR’s airing of her death on public radio, as well as a letter to the mother, the abortionist, and NPR.

READ: Priests for Life to host day of mourning for baby whose abortion death was played on NPR

Fr. Alan said Priests for Life is asking pro-lifers throughout the country for prayers and penance on Dec. 3, to make reparation for the sin of abortion, to honor this particular child who was so publicly dishonored, and to implore God’s mercy for the conversion of those who killed her. “We ask for prayers, fasting, Masses, rosaries, individual or in community,” he said, “with the intention first of commending this child’s soul to God in mercy… for conversion of the abortionist, for the mother herself.”

Fr. Alan went on to explain that in Advent “we look back to the Incarnation, of course, honoring Christ in the womb of Our Lady, and look ahead to His second coming, in which He will set all things right. Justice will be served fully. This baby, his child, this baby, Amanda Marie, will be fully vindicated by Jesus Christ on the last day, in whatever way he deigns. But it will be a perfect, full vindication before all humanity, even those who killed her. But we want to do our part in the meantime, to say, ‘Look we did what we could to vindicate this child in this sinful world of ours.’”

Quoting the famous pro-life Congressman Henry Hide, Fr. Alan said: “When we face our judgment, a terror will rip through our souls as we’ve never experienced before… But those of us who have been involved in the pro-life movement… will hear a chorus of voices that were never heard in this world but will be heard beautifully in the next. And they will say to the Lord, ‘Spare him, O Lord, for he loved us.’ And Our Lord will turn to us and say, not, ‘Did you succeed,’ but, ‘Did you try?’”

“And I would add to that, ‘When you tried and did not succeed, did you still honor these children in death as you would have honored them in life?’”

Explaining one of the prayers that Priests for Life has their website, the Litany of Mourning and Reparation, Fr. Alan said, “In that litany, we’re praying for mercy; we’re recalling all the things we took from this child: her life, her dignity, publicly disgracing her, etc. And we’re praying it on behalf of those who killed her… We’re all sinners in a sinful world, and so, while we have to condemn the disgusting nature of the sin… we need to pray for their conversion.”

“We need to do our part to honor these kids as we honor the fallen in any war,” he declared. “This child needs to be honored.”