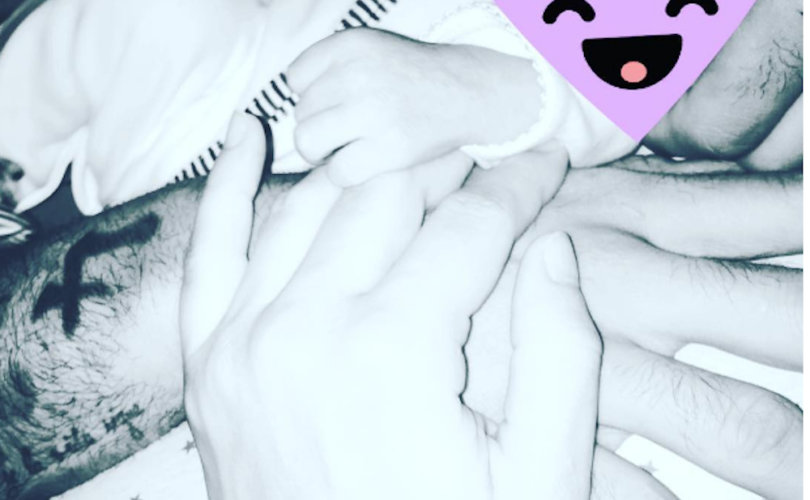 European basketball player Augusto Lima posted this picture on Instagram after the birth of his baby.

ISTANBUL, Turkey, June 2, 2017 (LifeSiteNews) – A Lithuanian basketball coach recently educated a reporter who insistently questioned him about a player missing an important playoff game for the birth of his child.

Having children is “the height of a human experience,” Sarunas Jasikevicius told the reporter, and nothing in the world is more magnificent than the birth of a child, whether titles or anything else.

Speaking at a press conference during the recent EuroLeague semifinals, the coach of Lithuanian basketball team Zalgiris also pointed out for the reporter that basketball does not take precedence over the birth of a child.

Jasikevicius, himself just 41, perhaps communicated the message best through his facial expressions and demeanor, referring to the reporter at one point as “youngster” in explaining how he would understand one day should he have kids of his own.

The exchange, caught on video and containing English subtitles, has gotten considerable intention on the Internet and in the press.

The reporter began by asking Jasikevicius’ thoughts about 25-year-old center Augusto Lima leaving during the semifinal series to attend the birth of his child. The team won the game that day, and Lima’s daughter was born.

“What do I think about it?” Jasikevicius replied, seeming almost stunned. “I allowed him to go.”

“But is it normal for a player to leave the team during the semifinals?” the reporter continued.

Amid the subtitles, Jasikevicius’ reaction is clear from the expression on his face.

“Do you have kids?” he promptly asked. “When you gonna have kids, youngster, you’ll understand.”

“Because that’s the height of a human experience,” stated Jasikevicius.

“Wow, that’s a good question, really,” the coach continued, still seeming bemused. “Do you think basketball is the most important thing in life?”

His message remained lost on the reporter, who offered swiftly in reply, “No, but a semifinal is important.”

“Semifinal?” Jasikevicius questioned right back. “To whom is it important?”

“The team,” countered the reporter.

“Which one?” asked Jasikevicius.

“Did you see the numbers of fans at the game?” Jasikevicius asked him. “Important?”

“When you see your first child, you will understand what the most important thing in life is,” he explained. “Come and have a chat with me then.”

“Because nothing can be more majestic in the world than the birth of a child,” said Jasikevicius. “Believe me, not titles, not anything else.”

The coach re-emphasized in conclusion the magnitude of his player’s life event that day.

“Augusto Lima is now in heaven emotionally,” Jasikevicius said, pointing to the sky. “I’m really happy for him.”

Jasikevicius is a former professional basketball player and a bronze medalist from the 2000 Olympic Games. He played college basketball at the University of Maryland and briefly in the NBA for the Indiana Pacers and Golden State Warriors. Jasikevicius has earned numerous honors and awards during his career.

The father of two may have inherited his regard for parenthood from his mother.

Rita Jasikviciene was a world champion handball player who forfeited her chance to compete with the Soviet team in the 1976 Olympics so she could give birth to her son. It was the first year for Olympic women’s handball. After choosing motherhood, she was not asked back to the team.

Augusto Lima posted a welcome for his daughter Alba on Instagram and Twitter a few days after her birth.

“Alba lima Fernández 05-17-207 I want to write these lines to give thanks. Thank you God for bringing us Alba. Thank you because everything has turned out perfect and because both my little girl and Rosa are perfect. Thank you for giving me the happiest day in the world. Thank you for letting me live that feeling of being a father. An indescribable feeling with words. It is undoubtedly the best gift of my life … and for which I am grateful every day since Alba came to this world. AND THANK YOU all for the great amount of affection that both I and my family have received since the little Alba was born! THANK YOU!”

Lima also tweeted his gratitude to Jasikevicius, writing in Spanish, “There are people and people, coaches and trainers, but this man is very large (and) inside outside … Thanks coach.”