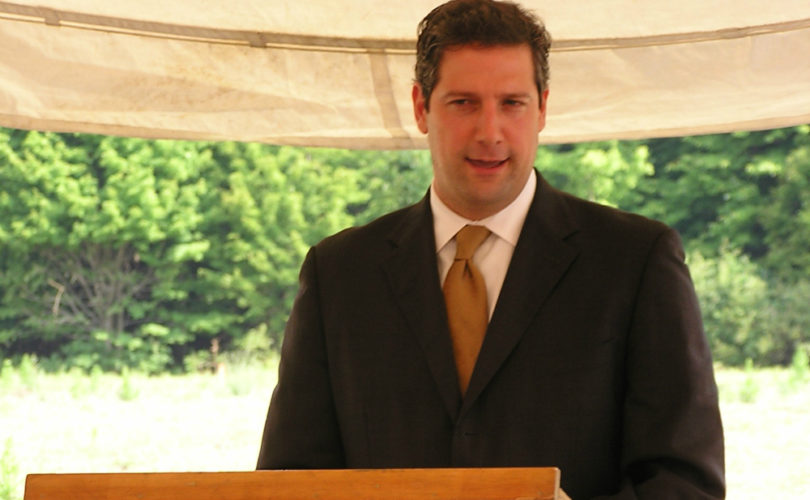 Ryan wrote that, after years of identifying as a pro-life Democrat, he had formally embraced abortion-on-demand in an op-ed published last Tuesday in the Akron Beacon-Journal. He surprisingly cited his Catholic faith and the birth of his first child as reasons for his decision to support abortion.

“Particularly troubling in Congressman Ryan's op-ed was that he completely dismissed the humanity of the preborn baby,” said SFLA President Kristan Hawkins.

Instead, she said, Ryan used “familiar talking points from the abortion industry” to gloss over the fact that, in every abortion, “a life is taken – one that he didn't even talk about in his op-ed.”

Despite the reasons he offered, Kristen Day of Democrats for Life of America (DFLA) said Democrats like Ryan change their tune on abortion for only one reason: Money.

“The truth is you cannot get funding from national Democratic spigots unless you pass the pro-choice litmus test,” Day wrote in an op-ed for The Hill.

Ryan will need access to Democratic megadonors if he decides to run against incumbent U.S. Senator Rob Portman, a Republican who has served as vice chairman of finance for the National Republican Senatorial Committee and has a campaign war chest of $6 million on hand. Ryan denies that politics played no role in his decision and maintains he was guided by his conscience.

Ryan's fall from grace, as an up-and-coming pro-life Democrat in the mold of fellow Ohioan Tony Hall, to another supporter of abortion-on-demand has been years in the making.

“I am saddened to see this once hopeful congressman fall deeper into the deception of the abortion lobby,” Day wrote.

Day said she met Ryan in 2004 and asked him to affiliate with DFLA, finding in him a kindred spirit. Yet after supporting several pro-life bills – including a national partial birth abortion ban – Ryan's voting record began to slip. By 2009, Day no longer considered him worthy of the name pro-life.

“When Ryan voted in favor of taxpayer funding of abortion, we removed him” from DFLA's advisory board, because “[h]is record by then, quite frankly, was calling to question DFLA’s integrity.”

Although his support for redefining marriage has cost him support among his own party, Portman is considered likely to be reelected in 2016. Both Hawkins and Day believe Ryan's new position on abortion may turn out to be a liability, calling into question his integrity and putting him at odds with Ohio voters, especially young people.

Money alone will not win the Senate race, Day said.

“Abortion rights donors from outside the state may find his public pronouncement appealing and reassuring. However, in elections, it is votes, not money, that matters,” Day wrote. “Just ask Wendy Davis.”

The SFLA ground campaign for life will continue after visiting the congressman. Hawkins said SFLA is striving, not just to make noise on political issues, but to build a sustaining and nourishing culture of life.

“We are working hard on our campuses to make them more pregnancy and parenting friendly,” she said. “It starts with changing the culture. And this generation, through their care for the mother and the baby, will be the ones to ultimately abolish abortion.”

Correction: The original version of this article said that the students would be visiting Congressman Ryan’s congressional district in northeastern Ohio. We regret the error..