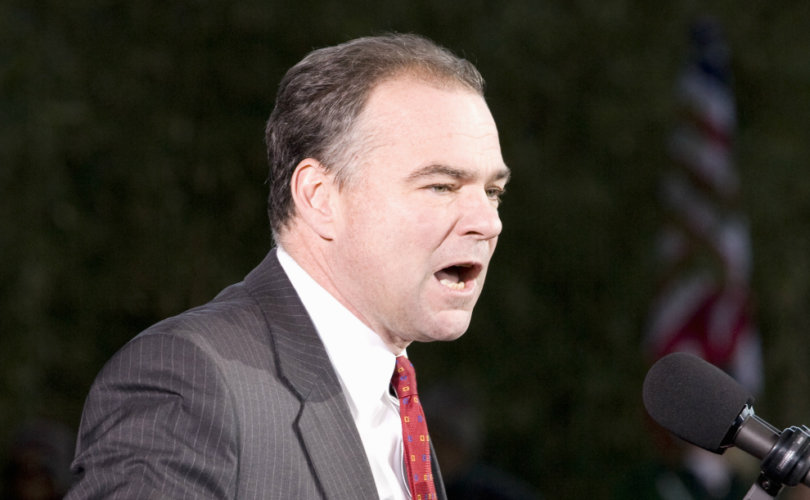 Update: Shortly after 8:00 p.m. news broke that Clinton has chosen Kaine as her running mate.

July 22, 2016 (LifeSiteNews) — In the days leading up to the Democratic national convention next week, Hillary Clinton’s choice for a running mate will be a major topic of conversation and one of the leading candidates considers himself a strong Roman Catholic while supporting abortion.

Sen. Tim Kaine, D-VA, has emphasized in recent interviews that he has a “pro-choice” voting record on Capitol Hill and endorses Roe v. Wade. At the same time, he professes to hold political views dichotomous to the teachings of his “traditional” Catholic faith that abortion is morally wrong in all cases.

But some pro-abortion advocates question Kaine’s commitment to their cause based on what they perceive as potential fence-straddling between the faith that shapes his personal beliefs and his political stance. That could be a sticking point as Clinton makes her choice for vice president.

In 2008, Kaine was considered among the finalists for the Barack Obama presidential ticket but ultimately lost out because of concerns about whether his personal beliefs aligned with Obama’s radical anti-life agenda.

Fast-forward eight years later and Kaine frequently uses the woman’s right-to-choose argument for his stance on abortion while trying to portray himself as a moderate, saying “I have a personal feeling about abortion, but the right rule for government is to let women make their own decisions.”

Moreover, Kaine has a perfect pro-abortion voting record in the Senate and has rejected attempts to defund Planned Parenthood. Kaine also is a co-sponsor of the Women’s Health Protection Act.

“I have a traditional Catholic personal position, but I am very strongly supportive that women should make these decisions and government shouldn’t intrude,” he added. “I’m a strong supporter of Roe v. Wade and women being able to make these decisions. In government, we have enough things to worry about. We don’t need to make people’s reproductive decisions for them.”

Kaine’s view on abortion forced Democrats for Life to renege on an endorsement and the group now lists him as “pro-choice.” He has tried to distance himself from the issue whenever possible but defends his record as Virginia’s governor. He said recently that he helped the state fight off restrictive laws similar to those in Texas that were recently struck down by the U.S. Supreme Court “because you have to let people make their own moral judgments.”

Kaine’s stance on abortion wasn’t always as staunch. While running for governor in 2005, he supported abstinence-based education and supported measures to reduce the number of abortions. NARAL gave Virginia an F grade in 2007 for restrictive abortion laws, and Kaine also was criticized for authorizing the sale of “Choose Life” license plates.

But he moved more toward the abortion camp when he ran for the Senate in 2012, attacking opponent George Allen for backing a bill that would identify life beginning at conception.