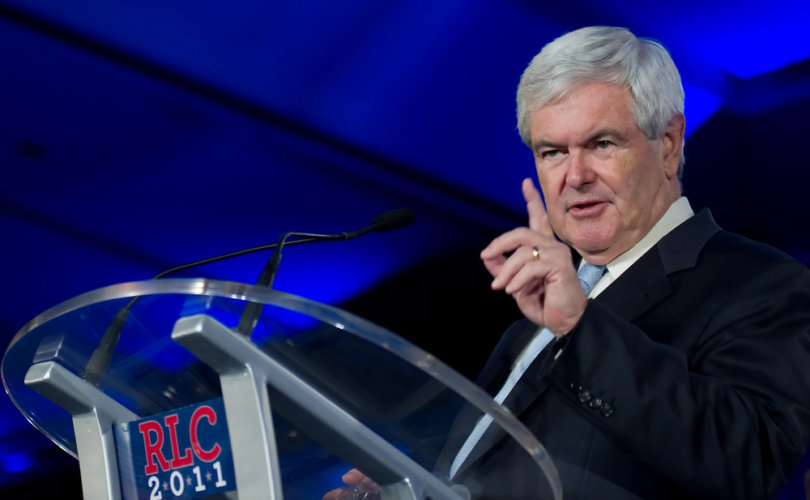 October 4, 2016 (LifeSiteNews) – The consequences of any presidential election are high but, according to Newt Gingrich, this year the stakes are incalculable.

The former House Speaker said this election may determine whether the nation is ruled by a “secular totalitarianism” that seeks to replace America’s Judeo-Christian morality with “atheistic values.”

“On the one front, you have a secular totalitarianism that wants to use the power of government to coerce us on every level,” Gingrich said, “to determine even what happens inside of churches and synagogues, and to impose on us left-wing, frequently, atheistic values.”

“We have not seen the Judeo-Christian historic traditions threatened the way they are today ever in American history,” he warned the pastors’ gathers last week in Winston-Salem, North Carolina. The state, a major battleground state in the 2016 election, is at the forefront of the national controversy over transgender use of such women’s intimate facilities as showers, lockers, and public restrooms.

That dominant, secular mindset tells Christians, “'You're allowed to sort of, vaguely, believe in your faith as long as you don't talk about it – certainly don't do anything in public about it – and that religion should be reduced to one-hour on Sundays,” he said. “And even then you better be careful what you say.”

The other force is Islamic extremism, increasingly targeting Americans in the homeland, Gingrich said.

“You have a duty to have the courage to stand up and tell the truth,” he charged pastors.

“And if you do your duty, you will be part of launching a Great Awakening that could once again help America,” he said, adding that a 21st century revival will be “a different awakening” that takes place largely on social media.

Gingrich spoke by video to the conference, led by David Lane, who actively recruits clergy to run for office. Ministers make good leaders, Gingrich said, because they have studied broadly, read intently, and think deeply about life’s most pressing problems from a spiritual perspective.