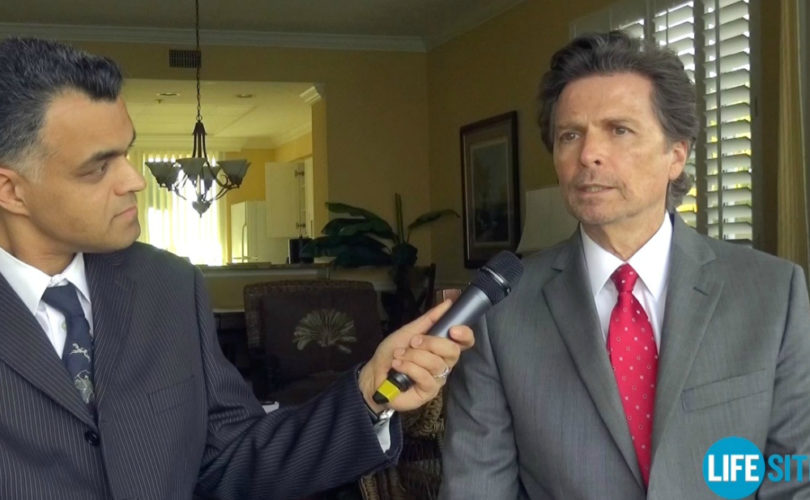 ORLANDO, FL, February 11, 2015 (LifeSiteNews.com) — Paul Darrow thought he had it all, living a glamorous gay-lifestyle in New York as an international male super model. Life was Darrow’s oyster and he grasped at every thrill it had to offer.

“I traveled all over Europe and the United States. I was always in glamorous careers with movie stars and famous models, going to all the ‘in’ spots like Studio 54 in New York. It was just a beautiful life. I was not unhappy, at least I did not feel unhappy. I felt I had the world by the tail,” Darrow told LifeSiteNews.

LifeSiteNews caught up with Darrow and Father Paul Check, executive director of Courage International, earlier this month where Darrow spoke at the Legatus conference of Catholic business executives.

According to Darrow, the lifestyle instilled in him a “frantic” appetite for sex that became more insatiable the more he tried to satisfy it. He eventually moved through thousands of men in pursuit of a fulfillment that always eluded him.

Everything began to change for Darrow, then a diehard atheist, when one day he heard a “pirate nun” with a black patch over her eye speaking on TV about God in the most convincing and honest way he had ever encountered. EWTN founder and host Mother Angelica convinced Darrow that it was time for him to become serious about God.

“It just went through me like lightening. … She said some things that really pulled me in,” he said.

Before long, Darrow found himself in the Catholic Church, confessing his sins and making peace with God.

Now Darrow, in his 50s, spends his time traveling with the message that people struggling with same-sex attraction are “so much more than the sum total of our desires and inclinations.” He is a member of Courage, a Catholic outreach group to those with unwanted same-sex attraction who desire to live according to God’s plan for sexuality as taught by the Church.

“I really want to make up for all of those years when I was away from God, when I denied God,” he said.

Darrow said he now sees the homosexual lifestyle as being all about “self indulgence” and totally focusing on one’s self, not on other people. “It really is about ‘us.’ It’s about trying to be satisfied, trying to have our desires satisfied,” he said.

“Now I want to make up for those years of self indulgence and living that self-indulgent lifestyle by honoring the one who saved my life so many times in so many ways,” he said.

Darrow said that living a chaste life, where he does not give into sexual desire, is a source of great peace and joy for him.

“Can you imagine going from a sex-addict to total chastity. And why are a lot of my friends doing this as well? It’s simply because of our enormous love for God. It’s a huge sacrifice. It almost sounds impossible. But, it’s not impossible. And I did it effortlessly.”

Darrow said he now possesses a life of “total peace” and the incessant search for sexual fulfillment “isn’t there anymore.”

Father Paul Check, executive director of Courage International, told LifeSiteNews that chastity is the Catholic Church’s “good news” to people with same-sex attraction who are striving to live a Christian life.

“They, as much as anyone else, are invited to the heart of Christ for that grace that helps them to understand best who they are,” he said in a wide-ranging interview that covered the nomenclature used by the Church to describe persons with same-sex attraction, the nature of the human person, and contraception and its link with promiscuity.

Check said that chastity is a power that not only helps to govern the sexual appetite, but more importantly, it “makes sure that the heart’s desire for self-giving and the reception of another person’s heart is done according to God’s wise design for humanity.”

“We want to hear that we are valuable and important to other people, not first for what we can ‘do’ for them, but rather for who we ‘are,’” he said, calling chastity the virtue that helps people value others in this way.

“We have to recover the sense of the beauty and the importance of chastity as something that leads to fulfillment for everyone, married, unmarried, our state in life, always,” he said.

Editor’s Note: Courage released a film in August titled “Desire of the Everlasting Hills” (order the DVD here or watch the entire show online here) which tells the stories of three individuals, including Paul Darrow, who lay bare their souls as they describe their journey through life with same-sex attraction.