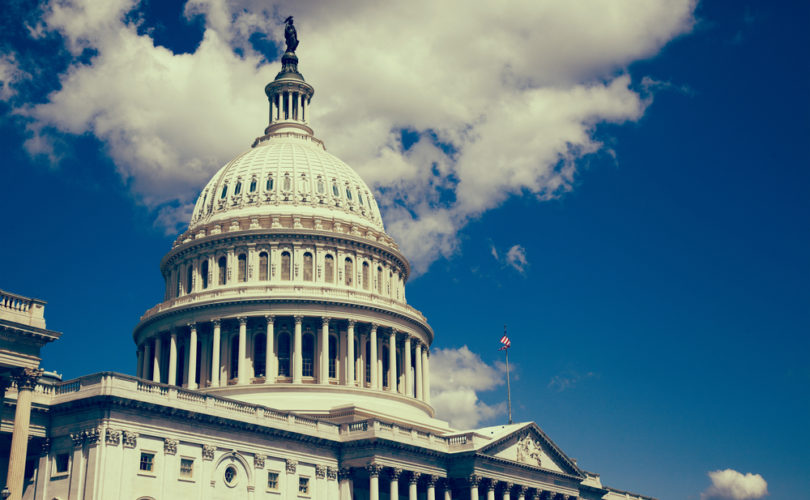 Missouri’s Josh Hawley, whose wife assisted on the case as an attorney for Alliance Defending Freedom, called it a “momentous day.”

“This is a momentous day in America, when the efforts of generations of modern-day abolitionists comes to fruition,” Hawley tweeted. “One of the most unjust decisions in American history has been overturned.”

“One of those modern-day abolitionists is my wife, Erin, who served as counsel to Mississippi on this case and helped write the briefs that prevailed at the Supreme Court,” he tweeted. “She is an amazing woman, and this is an amazing victory for life.”

One of those modern-day abolitionists is my wife, Erin, who served as counsel to Mississippi on this case and helped write the briefs that prevailed at the Supreme Court. She is an amazing woman, and this is an amazing victory for life

For those who wondered why I said, two years ago, I would vote to confirm ONLY Supreme Court Justices who acknowledged Roe was wrong, this is why. Amy Barrett was the first openly pro-life nominee of my lifetime. And she was the deciding vote

“The Supreme Court’s decision in the Dobbs case, reversing Roe v. Wade, is nothing short of a massive victory for life, and it will save the lives of millions of innocent babies,” Senator Ted Cruz tweeted.

The Texas Republican called Roe “one of the most egregious departures from the Constitution and legal precedent the United States has ever seen, and one that has resulted in the deaths of 63 million American children.”

The decision reverses one of the most egregious departures from the Constitution and legal precedent the United States has ever seen, and one that has resulted in the deaths of 63 million American children. 2/x

“Having worked alongside Tennesseans to protect the innocent lives of unborn children for years, I applaud today’s Supreme Court ruling,” Senator Marsha Blackburn of Tennessee tweeted.

Arkansas’ Tom Cotton called Roe a “tragic mistake” and thanked pro-life activists for their work to reverse it. “The Supreme Court has finally corrected this mistake and I highly commend the millions of Americans who toiled for years to achieve this great victory for unborn life and self-government.”

Senator Marco Rubio of Florida praised the ruling and released his plans for what he wants to happen next to support families.

“Today the Supreme Court correctly returned the power to regulate abortion to the states,’ he tweeted. “I will soon introduce a proposal to support mothers and their babies so that every child has a real opportunity to pursue the promise of America.”

Now we need a pro-life plan for post-Roe America

Here is my proposal to support mothers & their children not just before birth but also after
https://t.co/x2AFH116g9

Moderate South Carolina Senator Lindsey Graham called Roe “one of the largest power grabs in the history of the Supreme Court” and tweeted he is glad the issue of abortion will now be returned to the states.

“Millions of Americans have spent half a century praying, marching, and working toward today’s historic victories for the rule of law and for innocent life,” the Kentucky Republican stated. “I have been proud to stand with them throughout our long journey and I share their joy today.”