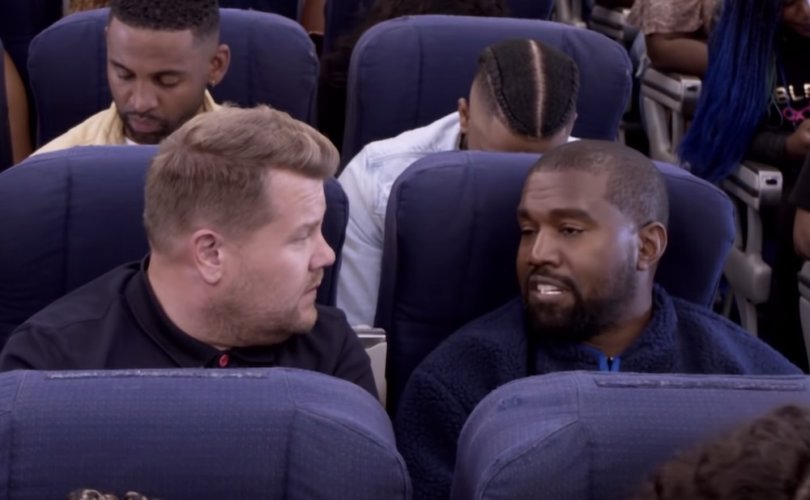 October 31, 2019 (LifeSiteNews) – Kanye West and his choir appeared on James Cordon’s Late Late Show this week for an interview in which the rapper shared more about his new religious worldview, including opening up about his “heavenly” marriage and the “riches” of having children.

The interview was an expansion of Corden’s recurring “Carpool Karaoke” segment, trading in a car for a passenger jet to accommodate the choir and their performance of “Jesus Walks,” from West’s new album Jesus Is King.

West explained that his awakening began while he was hospitalized in 2017. “God’s always had a plan for me and He wanted to use me, but I think He wanted me to suffer more and wanted people to see my suffering and see my pain and put stigmas on me and have me go through all the human experiences,” he said. “So now, when I talk about how Jesus saved me, more people can relate to that experience. If it was just, 'We grew up with this guy and he’s a superstar,' it’s less compelling than this guy who had a mental breakdown and this guy was in debt.”

“God is using me as a human being — as humbly as I can put it — He's using me to show off,” West believes. “Last year, I made $115 million and still ended up $35 million in debt. This year, I looked up and I just got $68 million returned to me on my tax returns,” he explained. “People need to hear someone that had been put into debt by the system talk about these kind of numbers now that they're in service to Christ.”

“People who don't believe are walking dead,” he declared. “They are asleep and this is the awakening.”

The rapper also discussed his family life, saying that while “people thought it would be uncool to be married,” in reality his marriage to Kim Kardashian is “heavenly” and “magnificent.” The father of four added that he hopes to ultimately have seven kids, because “the richest thing that you can have is as many children as possible,” said West.

The first public signs of West’s evolution appeared last year when he declared President Donald Trump his “brother,” lamented former President Barack Obama’s failure to effect change in Chicago, and opened the door to potentially identifying as a conservative in the future. In other interviews surrounding the release of Jesus Is King, West has also denounced abortion, food stamps, and pornography.