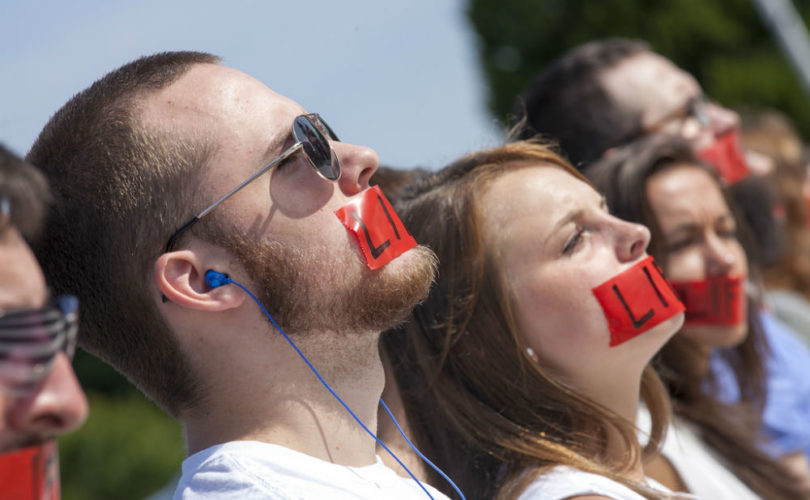 AUSTRALIA, April 28, 2017 (LifeSiteNews) — A private member's bill expected to surface for parliamentary debate in New South Wales as early as May will punish those inside a 150-meter “exclusion zone” at an abortion clinic who express disapproval of abortion either through posters or verbal communication.

The new bill would make it a criminal offense to “bother, beset, harass, intimidate, interfere with, impede, obstruct or threaten, by any means, a person who is accessing, leaving, or attempting to access or leave, premises at which abortions are provided.”

Even a boyfriend, husband or parents of a woman seeking abortion — if they are found to be asking her not to undergo the life-altering procedure while within an exclusion zone — could face a penalty of six months’ imprisonment under the proposed law.

The Abortion Law Reform (Miscellaneous Acts Amendment) Bill 2016, which was introduced to the NSW Parliament’s Upper House in August by Greens MLC Mehreen Faruqi, would also repeal all laws punishing unlawful abortion, including the use of abortion drug RU-486.

Debate on the bill was adjourned after Faruqi gave her second reading speech late last year, which is why further debate is expected this year.

Abortion is legal in NSW under relevant case law when it's performed by a licensed medical practitioner and only then if a full risk assessment has been conducted, taking into account such aspects as physical and mental health risks to a woman. Unlawful abortion is currently a punishable crime under s.82-84 of the NSW Crimes Act 1990.

It will also be a criminal offense for pro-life activists to film, photograph or record video or audio of individuals accessing or leaving an abortion clinic in the name of privacy.

The proposed bill will additionally deny the right of doctors to practice in accordance with their conscience by refusing to participate in or perform an abortion if it is against their moral convictions and contrary to the best interests of their patients. Even if a doctor refuses on grounds of personal conviction, the individual will be legally obligated to refer the patient to another doctor to perform the procedure.

It should be noted that no woman has ever faced prosecution for having an abortion under current NSW law, which protects women from unlicensed practitioners and gives some legal safeguards when it comes to forced or coerced abortions.

Australian pro-life advocates believe that the proposed bill will put NSW women at greater risk by removing restrictions against unqualified persons performing an abortion (including self-administered abortions) and failing to provide safeguards to ensure women give fully informed consent. It allows the abortion of viable babies right up to birth with no restrictions, a troubling issue given the fact that in the UK the number of babies who survive premature birth at 23 weeks has increased to a record 1 in 3, as new official figures have revealed.

Applying new technology like successful artificial wombs for premature lambs will potentially mean premature babies will soon have an even higher survival rate.

“Most importantly of all, it has raised serious objections among NSW’s women, particularly those who have experienced abortion themselves and find that the bill completely ignores their stories.

“Too many women have experienced pressure, coercion, abuse, domestic violence, absence of true care and informed consent, and  a general lack of information and support surrounding abortion and unplanned pregnancy.”

The group warned NSW Parliament to listen to the community's voice as they consider the “grave” and “potentially damaging” implications of the proposed legislation.

There is an online petition protesting the bill.

Caleb Stephen is a widely-published Christian freelance journalist, columnist and social commentator based in Australia. He is also the founder and editor-in-chief of TruthJournalism.com. Caleb, the oldest in a family of nine, has been an active pro-life advocate for a number of years participating in rallies, political campaigns, multimedia promotion and public events. He is a staff writer with one of Australia’s leading Christian advocacy organisations. Caleb is thankful for the opportunity to be one of LifeSiteNews’ Australian correspondents. Visit his website CalebStephen.com and follow him on Twitter @CalebSOfficial