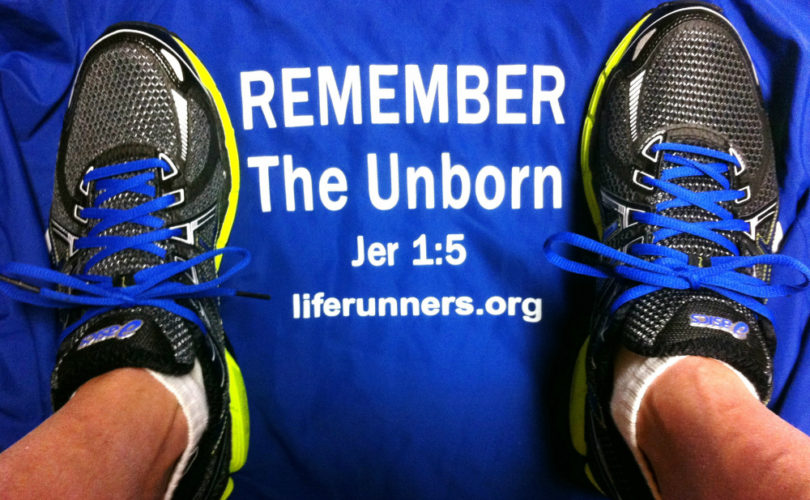 'Our team has nearly tripled in size since our first relay in 2013.'LifeRunners.org

NEW YORK, NY, February 11, 2015 (LifeSiteNews.com) – Doctors say that running may add years to your life, but later this month hundreds of people will run to help give life to the unborn.

Running enthusiasts from around the country will crisscross the continent between February 18 and March 29, spreading the message of life and human dignity.

LIFE Runners expects this year's race to stretch 5,564 miles – the equivalent of running a 5K race 1,568 times. Yet so many people want to participate, the organization has had to add even more locations to this year's LIFE Runners A-Cross America Relay.

“Our team has nearly tripled in size since our first relay in 2013,” the group announced.

“Last year there were 306 relay runners from 28 states, ranging in age from 12 to 72,” said Dr. Pat Castle, the president and co-founder of LIFE Runners. “This year, with the new North and South American arms, which superimposes a cross on the map of the U.S., we have the largest Relay we’ve had yet.”

One week from today, teams of runners in New York and San Francisco will begin their trek across North America, as usual.

But for the first time, a few weeks later, runners in the new South Arm will begin their 1,086 mile journey at Corpus Christi Bay in Portland, Texas.

They will be followed by those making up the new North Arm of the event, covering 389 miles beginning Grand Forks, North Dakota.

Participants will stop regularly to pray at abortion facilities along their cruciform route, taking part in the overlapping 40 Days for Life event.

“We LIFE Runners will cover the same number of miles – in all kinds of weather – that it takes to get from the Brooklyn Bridge to the nation of Turkey, which is where I was stationed during the 9/11 attack,” Dr. Castle said.

“We lose a 9/11 number of America’s unborn every day to abortion,” he added.

All four groups will eventually converge in Sioux Falls, South Dakota, on March 29, which happens to coincide with Palm Sunday.

There is no cost to join, aside from purchasing the signature LIFE Runner shirt – emblazoned with the message, “REMEMBER The Unborn, Jer 1:5″ – and agreeing to wear it in public. However, this year there is a $25 fundraising minimum to benefit crisis pregnancy centers along the route and the event's sponsor, the Vitae Foundation.

Anyone who wishes to take part – for a few miles or a few weeks – is encouraged to sign up on the LIFE Runners website and register for a specific route, then pray the LIFE Runners Creed to end abortion. Individual LIFE Runners will be added to the Prayer Wall.